This article is one that stems from our push to incorporate the voices of up-and-coming researchers on topics in education. In September, we interviewed Dr. Rolandria Justice-Emenuga, and a recording can be found here.

"They just don't care about their kids." I always cringe when I hear that statement from school staff because it is usually about a mother of color. As a mother to three children, and a former educator, I know intimately what it means to care deeply for your children while having your voice and experiences silenced by these well-meaning but dismissive statements.

I had been in education for almost fifteen years as a teacher, principal, and consultant when I entered my son's preschool for a meeting with his teachers. I thought we were there to meet to discuss his educational needs and make a plan to get him any support he needed. However, it ended with me in the hallway crying in the arms of the school's social worker. During the meeting, I felt talked at, demeaned, and treated as if my knowledge as his mom and educator were being ignored. They had not heard me share my fears for him as a Black boy in a school of 6% Black children. They only briefly referred to the documents I had meticulously completed of his history and progress and did not ask for or invite my opinion. I needed them to understand what they didn't know about being a Black child so that I could trust them with my most precious gift.

In loco parentis, or "in the place of a parent," refers to the common law doctrine in which schools assume legal responsibility for students when entrusted with their care. For many Black children, schools center their interpretation of this principle around the disciplinary aspect of parenting and less on the support and uplifting part. As a result, black children in America are more likely than White children to attend high-poverty schools, be retained, score lower on proficiency assessments, and be suspended and referred to law enforcement (Cook, 2015; Garcia, 2020). Additionally, author Bettina Love describes the "spirit murdering" Black children experience in schools. These are "acts of trauma that leave personal, psychological, and spiritual injuries on children." Children such as Izzy Tichenor, a 10-year-old Black girl with autism in Utah who committed suicide after her complaints of bullying were ignored by teachers and leaders in her school.

Caring for Black children involves much more than simply controlling and punishing them. It is beyond time for schools to center the voices of those who intimately know how to create safe spaces for Black children. My research examined the question, "what does it mean to care for Black children?" from the perspectives of four Black women leading and mothering Black children in the US. These women, named Ms. Brooklyn, Dani, VitaButtafly, and Celeste, work in schools throughout the northeast as assistant principals and district leaders and are mothers to Black children ranging from 3 to 30. They embodied all aspects of in loco parentis. They shared their extensive expertise to redefine what it means to effectively care for Black children.

• Understanding the impact that race has on children and families

Everyday racism is defined as "injustices recurring so often that they are almost taken for granted... injustices one comes to expect" (Essed, 1991, p. 203). These behaviors range from less obvious slights such as having your intelligence questioned to more blatant ones such as exclusionary discipline practices. These injustices occur so often that they can negatively impact the quality of life for Black children and their families. For example, VitaButtafly shared an interaction with her grandmother as a young child at the bank. She describes being confused when her grandmother would move back and allow a White customer to move ahead of them while waiting in line. When asked about this practice, she realized that her grandmother had internalized a belief that White people deserved to go before her. Caring for Black children means understanding the impact that racism has had on the internalized beliefs of Black people.

• Talking with children about race

However, just understanding the impact is not enough, as talking with children about race is necessary. Children as young as 3 months old have racial awareness and by 3 years old have shown racial preferences. Research has suggested that many stereotypical racial characteristics, such as hair texture and length, are more emphasized in girls than boys, implying differences in how Black girls and boys develop their racial identity (Sturdivant & Alanis, 2020). This was not surprising to me as, at four years old, one of my daughters told me she "wants to be White." When I talked with her to unpack that statement, I realized that she wanted to feel glamorous, and all the princesses she saw were White girls. She needed to hear how beautiful she was and see other Black girls as queens and princesses. With that knowledge, I showed her Princess Tiana in "The Princess and the Frog," Brandy as Cinderella in the 1997 Disney movie, and we rewatched "Black Panther” to show her images of girls looking like her.

Ms. Brooklyn, mother of two and assistant principal at a high school, discussed the

importance of talking with Black children about race when supporting an upset student. The Black student came to her because he did not like the teacher’s response to him using incorrect subject-verb agreement. Ms. Brooklyn told them that he should share with the teacher “that her ancestors brought your ancestors here out of their will and then refused to teach them the language so initially this was not our tongue. So, if we’re not using [the correct] subject-verb agreement, it’s because we taught ourselves this language”. She shared that she loves being about to have frank and open conversations with students about race and empowering them about Blackness. When combined with the intentional discussion about race, these actions and others help address internalized biases about Blackness.

• Being willing to be vulnerable and authentic

Part of me supporting my daughter involved acknowledging to her that I had also experienced many of those same feelings she articulated. Caring for Black children means being willing to be vulnerable and authentic with them. As an Army brat, my dad was in the military, and we moved according to his assignments. After living in Louisiana, Texas, and Germany, we ended up in Manhattan, KS, where I attended schools with demographics similar to Izzy's. I vividly remember wishing I could switch out my brown hair and skin for the blonde hair and blue eyes of the girls I saw in my classes, on tv, and in film, in the books and college pamphlets I read.

Nel Noddings asserts that caring for someone involves getting into their personal frame of reference, not your own. "Our attention, our mental engrossment is on the cared-for, not on ourselves" (1984, p. 24). Being vulnerable with Black children is critical to show them that you care enough about them to put yourself in their shoes. Celeste described this connection with her daughter stating simply, “she is me”. She saw herself in her daughter and all the Black children she cared for. And as her mom, I was willing to share some of my internal struggles with not always feeling pretty as a Black girl so that I could help build and support my daughter.

The knowledge Black women and men bring towards effectively caring for Black children is critical to their success. Yet, studies show that Black parents feel a lack of political power to engage with schools, experience negative assumptions from school staff about them being angry or threatening, or feel dismissed when attempting to share concerns about perceived racial injustice (Howards & Reynolds, 2008; Lareau & Horvat, 1999; Posey-Maddox, 2017). Dani, the mother of two and principal of an all-girls high school, highlighted the importance of connecting with her students' families. Children are extensions of their families. She described sharing resources for grief counselors with one of her seniors who had lost her grandmother and was grieving. When she found out that the student’s dad was not on board with the idea, she met with him to discuss his concerns with therapy and assure him that she had his daughter’s best interest at heart.

When schools genuinely care about their Black children, it will reflect in how they treat those families. Are schools opening up their doors and inviting families in like Dani? Are teachers reaching out to family members to ask them to share their experiences, hopes, and wishes for the student? How are schools uplifting Black parents' and families' expertise regarding Black children?

Schools are not always safe places for Black children, and there is no one size fits all approach to caring for Black children. But, schools must understand that by accepting the responsibility to take care of Black children "in the place of" parents, they must be willing to understand what Black parents bring to the table. By incorporating more unrecognized ways Black parents love and support their children, schools can fight the oppressive structures that dismiss and demean their worth.

Biography: After graduating from Duke University, Dr. Rolandria Justice-Emenuga began her career as a middle school teacher in Newark, NJ. While she loved being in the classroom, she realized just how vital effective school leadership is to the success of the school and earned her Master’s in Educational Leadership from Seton Hall University. Her passion for educational leadership led her to relocate to Massachusetts, where she became the founding principal of a charter school in New Bedford. Scholars in that school successfully outperformed the surrounding district schools and created an inclusive environment centered around student voice, project based learning, and strong literacy practices. When she got married and began to have children, her life as a day-to-day school leader ended, but her desire to support them did not. She became a consultant/leadership coach and has partnered with several organizations, districts, and schools to create and facilitate high-quality leadership programs for school and teacher leaders. She recently completed her doctorate in educational leadership and started her own consulting company with the hopes of centering more Black, female voices in important educational conversations.

García, E. (2020). Schools Are still segregated, and Black children are paying a

Love, B. L. (2019). We want to do more than survive: Abolitionist teaching and the pursuit of

Posey-Maddox, L. (2017). Schooling in suburbia: The intersections of race, class, gender and

place in black fathers’ engagement and family-school relationships. Gender and 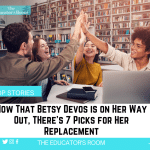 Now That Betsy Devos is on Her Way Out, Here Are 7 Picks for Her Replacement 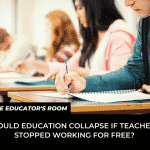 Would Education Collapse If Teachers Stopped Working for Free? 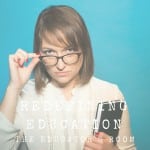