My heart was broken this week.

I came into work early Wednesday morning to prepare for an instructional walkthrough that wouldn't happen. As soon as I came into the building, my principal escorted me to a classroom filled with other staff and gave me the news that three of our students had died in an apartment fire.

About 45 minutes later, it was time to pick up the kids from the cafeteria. I did so with my eyes still red and wet and my voice shaky. The walk up to the classroom was the quietest it has ever been.

It was a difficult day as everyone in our classroom processed our grief. At one point one of the boys put his head down on his desk and started crying. Another boy at his table said aloud, "This kid's really crying?" There was a mixture of disbelief and shame in his voice.

In some small way, I thought I had done my part to disrupt patriarchy in my classroom. But as it turns out, sustaining and deepening my own emotional vulnerability would be hard to do.

The Will to Change

I've been thinking more about patriarchy since the Kavanaugh hearings. The cultural climate, combined with implicit and explicit requests from women I care about, pushed me to learn more about how I participate in patriarchy.

A good friend, another male elementary school teacher, recommended a book by bell hooks (the author does not capitalize name) The Will to Change: Men, Masculinity and Love. The book describes a range of ways in which the system of patriarchy hurts men even as they benefit from and uphold it. Reading hooks' analysis of this system, helped to validate and name a lot of my own experiences with masculinity. In particular, it helped to affirm the challenges I face as a man with expressing a full range of emotions. hooks wrote:

Learning to wear a mask (that word already embedded in the term “masculinity”) is the first lesson in patriarchal masculinity that a boy learns. He learns that his core feelings cannot be expressed if they do not conform to the acceptable behaviors sexism defines as male. Asked to give up the true self in order to realize the patriarchal ideal, boys learn self-betrayal early and are rewarded for these acts of soul murder.

Since reading this book, I have been especially sensitive to this pattern in my own life, as well as the lives of the boys I teach. With a clearer sense of how patriarchy plays out, the boy in my class who reacted with barely veiled ridicule at the other boy's tears is all too understandable.

Two days after the news of the tragedy hit our school, we came together to pay our respects to our lost children. At the start of a cloudy Friday morning, we created a large circle on our playground. Each student and adult received a pink or purple balloon, the favorite colors of the students who died. Our principal counted to three, and we released the balloons.

As we watched the balloons float upwards, there was a powerful collective release of our grief. Kids and adults held each other weeping, some uncontrollably. Where was I and what was I doing during this time?

I was about a foot behind the circle. As tears welled in my eyes, I turned away from the circle. I wiped them away as much as I could. I choked them back. In a few minutes, I stepped back into the circle, and back into the role of authority figure that patriarchy has made so comfortable for me.

Once my co-teachers, students, and I were back in the classroom, I excused myself. I found an empty classroom, and I let myself break down.

"It's okay to cry when you're feeling sad, even if you're a boy," I had said two mornings ago. But when it was time for me to cry, I still hid it.

One might argue that I did this because I had to "remain strong" for the kids in my classroom. But why then was it okay for so many of the other adults - all of them women - to cry openly throughout these difficult days?

The simplest answer is that despite the effort to subvert patriarchy in my words, I could not do so through my actions. A part of me, mostly subconscious, was embarrassed to cry in front of my students. A part of me was afraid of losing control of myself. So much of patriarchy comes down to that simple concept. Control. We as men are afraid of losing control of so many things, but perhaps most of all, of our emotions. What's only left to release then is anger.

As a white man trying to be a role model to mostly Black and brown boys, there is a nuance to this effort. The boys in my class in some ways have different, or perhaps fewer, male tropes to choose from than I do.

Nonetheless, I feel committed to finding a way to show a different path forward for their male identities. It shouldn't take a profound tragedy to learn this lesson myself, or to teach it to the students in my classroom. And yet, that is what happened.

A grief counselor speaking to our staff on Wednesday morning said, "Tragedies can teach us lessons. The lessons we choose to learn can help us to process our grief and honor those we lost."

I know I'm just beginning to learn lessons and process the grief of this tragedy. This grief and many other emotions can be available to me and my students as teaching tools. I will need to be patient with myself in the process. But one lesson I'm already learning is that there's a greater strength possible than choking back tears or hiding them in the dark. True strength is in choosing to be authentic, honest, and vulnerable. 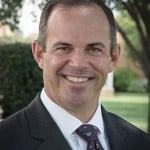 A Conversation with Dr. Jeff Butts, 2019 Indiana Superintendent of the Year 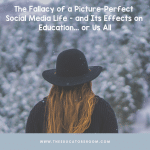 The Fallacy of a Picture-Perfect Social Media Life - and Its Effects on Education... or Us All
« [FREE Download] June Teacher Self-Care Calendar
Whatever It Takes: Story of a Committed Black Teacher »