Undeterred and confident with how profound my words were, I rattled out all of the immediate issues affecting teachers we all knew. In our circle of friends (who all happened to be teachers) we alone had:

-a teacher is afraid her school would be taken over by a charter school company due to years of low test scores that plagued the community.

-a teacher with 200 kids who pass through her classroom in one single day who were all expected to pass a new Common Core exam that no one had any clue what it would be like.

Yes, all of the above happened in one day on my timeline. In 2016, teaching is no longer a profession that is revered or even respected by the mass public. Instead, we have become a profession plagued by low morale and even lower pay.

As teachers, we are routinely asked to sacrifice while the demands of our jobs increase by the year. If there are no supplies for the class, teachers are expected to come out of their pockets to pay for them. If a child has missed 50 days of school, teachers are expected to perform miracles and get that child to pass standardized testing. Otherwise, we're the failure. To add insult to injury, more states have moved toward the movement of "grading" teachers by student achievement scores, cutting essential programs, and even making it illegal to teach specific subjects!

So I ask you again. Who in the hell would want to become a teacher? Startling, the numbers are starting to slide. According to ACT, the number and percentage of high school graduates reporting they are interested in pursuing education majors dropped from 7 percent in 2010 to 5 percent in 2014!

While it's become a hellacious time to teach, it's vital for me to empathize with teachers who have dedicated their time, effort, and resources to educate the children of this country-all with a smile on their faces. For those who are outside those classroom walls but who make policies that hinder our student growth, the issues that deter graduates from becoming teachers are clear:

1. Devastating effects of poverty- In every school in America, there is a child that leaves school that either doesn't eat when they get home or goes home to less than ideal circumstances. Sometimes they're the primary caregiver of their younger siblings other times, it's a much darker situation with kids living in the home with abusers and their lives in danger. Despite all that kids go through outside of school, teachers must deal with the effects at school. We are never required to whine about the situations we face because, according to education pundits, all that matters is what happens in the classroom. *insert smirk* In my fourteen years working in urban schools, I've witnessed teachers give 100% every single day, and due to circumstances out of their hands, kids still end up not being successful.

There was one particular teacher that I worked with a couple of years ago that is a phenomenal math teacher. She could not only teach math, but she understood it so well she was able to teach all courses, from introductory algebra to advanced trigonometry. Kids loved her, and they connected with her style of teaching them integrated math. However, the problem she kept encountering was that kids came to her class not knowing basic math facts, so she spent a large portion of her time remediating her kids. She still covered the standards, but it was difficult to move on when she recognized that at least 50-60% of the class couldn't solve basic equations. When her end-of-the-year exams came, her kids made GREAT gains, but she didn't meet the school's target and was reprimanded by her principal. So now you had a great teacher demoralized because of unrealistic targets set by people who don't teach and don't understand the deficiencies our kids come to high school with that impair their learning.
2. Educators have no say about policies that directly affect our classrooms. Just last month in Kansas, the teaching of Advanced Placement US History was outlawed, with similar bills being considered in other states such as Georgia and Oklahoma. Yes, you read that correctly, OUTLAWED. Elected people who have probably never taken an AP course (or taught) are constantly making decisions about education that do not benefit students. To make matters worse, if teachers go "against the grain" and refuse to agree, we're accused of being difficult and not being here for the kids.

Don't believe me about the number of decisions affecting education made by non-educators? Go to any education section of your local newspaper and see if any politician has spent any meaningful time in the classroom. I'll wait.

3. The pay is stagnant at best. My pay has stayed the same for the past six years despite my insurance and cost of living increasing by the year. So, in reality, I bring home less money, despite me having advanced degrees. With a family of my own to support, it's almost impossible to justify the number of hours of work I put in during a week compared to my take-home pay.  So many great teachers are being forced to leave education altogether because, financially, they can not support their families. While other public jobs make less, I can't think of other jobs (other than law enforcement and nursing) that can drain a person emotionally and physically as a teacher. We see every sense of social ill within the walls of our classroom.

I could go on and on, but people need to know that in America, we have to realize we have a whole generation who does not support public education- and that's dangerous. So while we are worried about who would want to become a teacher in these circumstances, the solution is crystal clear to all educators- something has to be done now to attract teachers who want to be in education for the long run. With the start actually having conversations with current teachers about what needs to happen for them to stay and to attract the brightest pre-service teachers, including:

-Making the starting salary competitive with what a graduate with the same type of training would make.

-Understanding over-testing children is not the answer to the increasing school achievement gap.

-Properly fund education in all areas of a building. There's no reason that schools are having to beg for toilet paper. We are one of the most significant powers in the world! Fund our schools.

-Give teachers more planning time. We cannot implement a thousand different programs and still have our planning periods taken! We need time, not more programs.

-Respect that teachers spend more time with children than almost anyone else in their lives. So treat us with respect. Society can not constantly berate teachers and then wonder why we don't stay.

Fortunately, when I enter my school, it was clear that the teachers in our building are saints who were not only great at what they do, but want to be there. They could easily be engineers, attorneys, and other more socially respected careers, but they choose to serve our students. So who would want to be teachers?

So who would want to be teachers?

Obviously, dedicated, intelligent, hard-working individuals do, but how much abuse from the public can they take before they break? 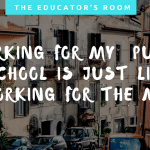 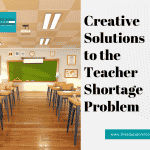 Reminders for the New Year for Teachers

Teachers Observing Teachers - A Closer Look
« The Baltimore - Education Reform Connection
Time To Clean The Filter...Surviving the End of the Year »