John Davis Jr. currently serves as the Creative Writing Program Director for Harrison School for the Arts in Lakeland, Florida. Previously, he has worked in private, charter, and correctional school environments. He holds a Master of Education degree from Florida Southern College and a Master of Fine Arts degree in Creative Writing from University of Tampa. He teaches in the college classroom part-time, and is an award-winning poet. You can follow his literary leanings at http://www.poetjohndavisjr.com/

This year would have been my fourteenth year in the secondary classroom, but it won’t be after this week. With a brand new crop of freshly oriented students ready for the year ahead, I will be leaving them for a full-time professorship at the college level. On one hand, it’s a great opportunity – I’ve been wanting to teach university students for about the last five years, and this new gig offers that chance. On the other hand, I’m leaving behind a loyal band of students I’ve known and taught the last couple of years. Many of them have come to know me well, and some even see me as a father figure; it all makes this change bittersweet. If my job were strictly about the students, I would never leave.

I will miss my students’ a-ha moments, the shiny plastic of their newly laminated driver’s licenses, and sharing their joy at homecoming, prom, and most of all, graduation. I will miss their humor, their discoveries in literature, and their mostly fixable squabbles. I will miss the days they get their braces off, the flash of proud new smiles. I will miss closed-door conferences and confessions that they can’t tell anyone else. I will miss a relationship that is unlike any other.

So why am I moving on when we’ve only had two weeks of a full school year? Well, yes, it’s partially for that higher paycheck and the greater freedom that college teaching promises, but there’s more to it than that. There’s so much that I won’t miss:

I won’t miss pep rally days or full moons, weeks of interrupted coursework due to ignorantly mandated testing, or having 10 minutes to eat my lunch. I won’t miss the petty politics of a departmentally divided school, or suspicious glances at faculty meetings when someone who honestly cares has done more than their fair share. I won’t miss didactic speeches about community while laboring inside a system that monetizes (and thereby encourages) cutthroat professional isolationism.

I won’t miss the futility of teaching on early release days. I won’t miss being on a salary schedule that caps how much I can earn each year. I won’t miss toiling my way up that schedule only to be told that the amount I’ve risen to is now the beginning salary for new, sometimes not-yet-certified teachers as an “incentive.” I won’t miss a district office so unethical that communications from its leaders have had to be censored by the media. I won’t miss having to fundraise or grovel for books and supplies that should be provided.

I’m tired of watching excellent educators strive to meet standards of excellence only to have the rules changed at the last minute. What’s worse, most of the ones changing the rules have never set foot inside the profession of education. I’m also tired of no one being able to meet in the middle and do what’s right for all of our children. Believe it or not, both the left and the right have some good ideas for education; we need the Bill Bennetts of this world as much as we need figures like Paolo Freire and Alfie Kohn. But we’ll never get anywhere if the warring camps can’t compromise. See our current debacle for evidence of this assertion.

Money is really my last reason for leaving. I have two graduate level degrees, one of which is terminal. I am partially paid for having one of these degrees in my district. To officials, the other degree – the one in education – is apparently worthless. To receive the salary I am about to ascend to, I would have to work another 20 years in our local public school system. Truthfully, my new much-longer commute will probably eat up most of this raise. But I don’t care.

I began my career teaching troubled youth in a correctional environment. I wanted to make a difference. Just this past summer, I renewed my teaching certificate, thinking that maybe somehow I still could. Now I’m one of the thousands who leave our profession every year because of foolish bureaucracy, unreasonable expectations, and institutionalized fallacy. Our public school system enshrines the counterproductive, rewards the sycophantic, and cherishes the wasteful. I cannot in good conscience serve any organization that holds these values. Not for stability, and not for a moment longer. I’d rather be a statistic than a hypocrite.

So there you have it – one last epistle from the front lines of the secondary classroom. One more week with my students, and then it’s off to bigger and possibly better things. Of course, I wish all of you who’ve chosen to stay a very happy and rewarding school year. Keep fighting the good fight, if you can. I look forward to teaching your well-informed and readily engaged students in my college classroom one day. I admire you for staying inside a profession that is under-supplied, underpaid, disrespected, and scrutinized by those who know least. Your loyalty is to be praised. Farewell, good luck, and happy teaching.[/fusion_builder_column][/fusion_builder_row][/fusion_builder_container] 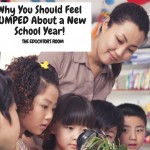 Why You Should Feel PUMPED About a New School Year

Take One For the Team: The Need for Self-Care
« Essentially, I am a Teacher
Why I Like to Start the Year with a Poetry Unit »