The PBS Kids show “Arthur,” which began in 1996, recently aired an episode in which Arthur’s teacher, Mr. Ratburn, marries his partner who turns out to be a man. Although this isn’t the first children’s program with openly gay characters, it got me thinking: if there are increasing numbers of LGBTQ+ characters in children’s television, shouldn’t there be more LGBTQ+ representation in the classroom?

The episode of the children’s TV show received both praise and negative feedback.

“PBS KIDS programs are designed to reflect the diversity of communities across the nation. We believe it is important to represent the wide array of adults in the lives of children who look to PBS KIDS every day,” said Maria Vera Whelan, senior director of marketing for PBS Kids, in a statement to The Educator’s Room.

“Arthur” is not the first children’s TV show to feature openly LGBTQ+ characters. Shows like “Steven Universe,” “Adventure Time,” “The Legend of Korra,” and even Disney’s “Andi Mack” have all featured LGBTQ+ characters.

If children’s TV is inclusive of LGBTQ+ people, why do teachers have such a hard time including LGBTQ+ inclusive materials in the classroom? Click To Tweet

According to The Williams Institute at UCLA School of Law, 220,000 children in the United States under age 18 have same-sex parents. “States with the highest proportions of same-sex couples raising biological, adopted, or step-children include Mississippi (26%), Wyoming (25%), Alaska (23%), Idaho (22%), and Montana (22%).”

Providing classroom materials like picture books that feature LGBTQ+ characters has a huge impact on our students. Children with LGBTQ+ identifying parents are able to see their families reflected in the books they read at school. This can go a long way in creating a safe and inclusive environment.

Teachers Who Provide LGBTQ+ Materials in the Classroom

Although there are only two U.S. states that mandate LGBTQ+ inclusive curriculums (California and New Jersey), teachers across the country have taken it upon themselves to make sure LGBTQ+ people are represented in the classroom. I spoke with two teachers who have experience in cultivating an LGBTQ+ inclusive classroom: Paul Emerich France and Nathan Lyon.

Paul Emerich France is a 3rd-grade teacher in Chicago, Illinois. He has a book coming out in October called Reclaiming Personalized Learning: A Pedagogy for Restoring Equity and Humanity in Our Classrooms.

France thinks it’s important to provide materials in the classroom that represent LGBTQ+ people. He notes that while it is difficult to collect data on this in the elementary setting, “you can be sure that some of your students will eventually identify as LGBTQ. We are creating safe spaces for them to cultivate their identities and identify role models for themselves. We can only do this if we read stories and tell stories about LGBTQ folks.”

Nathan Lyon teaches 4th grade in a suburb of Chicago. He also actively works to create an LGBTQ+ inclusive classroom. Lyons says that “our LGBTQ students need to be seen and validated. They need to know they are not alone and that who they are deserves to be celebrated.”

“I've brought LGBTQ+ inclusive books into my classroom for a few years now. At first, I'd simply include them in my classroom library, but now I highlight them and share them with students and read them aloud to students,” Lyon said.

Lyon’s district has done some training on inclusivity for all genders but hasn’t done much in recent years. He says he takes it upon himself to reach out to administrators to encourage them to do more training and targeted lessons with students.

France said that including LGBTQ+ materials in the classroom is something that he does alone, though he’s also “in a school that’s very supportive of welcoming the LGBTQ+ community into the classroom.” This wasn’t always the case.

“When I was working in the suburbs, I got myself into a lot of trouble for trying to host a discussion about the recently legalized marriage equality laws in Illinois (this was back in 2014),” France said.

Many teachers receive backlash from parents, administrators, and even colleagues when they’ve tried to include LGBTQ+ materials in the classroom. Some will say that having an LGBTQ+ inclusive classroom is “inappropriate” or that we shouldn’t be discussing sexuality with our students.

France says if a teacher is facing this type of backlash, he would point out that we already subtly discuss sexuality in the classroom: “When a woman has a Mrs. prefix, we are communicating that she is a sexual being. When a person wears a wedding ring, it is a public display of a romantic relationship which is most often a sexual one, too. When a teacher talks about his/her kids, they are most likely sharing a part of their lives that is the result of their sexuality.”

LGBTQ+ inclusion in the classroom isn’t about sexuality, or promoting a “lifestyle,” it’s about inclusion and teaching students to protect groups of people that face discrimination. By creating an LGBTQ+ inclusive classroom, we are working to mitigate the hate and discrimination LGBTQ+ people face during their lifetimes.

It is often difficult to know where to begin with making sure your classroom is LGBTQ+ inclusive. Remember that you are doing this for all of your students, not just the students who will someday identify as LGBTQ+ or that have LGBTQ+ family members.

“Students who are not a part of the LGBTQ+ community need to build empathy. LGBTQ+ inclusive books and materials help all students build understanding and empathy for others,” Lyon said.

Lyon suggests that teachers build community within their schools and to talk to administrators first if possible. He says teachers should:

Additionally, France points out that it is important to desensitize students to LGBTQ+ vocabulary. Teachers should “have open discussions about identity, and read books that shed light onto the intersectionality of the LGBTQ+ community.”

It’s About the Kids

The reality of our job as teachers is that we will face upset parents, administrators, and even colleagues at some point. However, showing our students that all types of people are welcome and celebrated in our classroom isn’t about us. It’s about our students and teaching them to be empathetic people.

“It always goes back to what is right for the kids. Know in your heart you are helping kids. And that's all that matters. Expect some speed bumps, but if folks are pushing back it might just mean you are on the right track,” Lyon said. 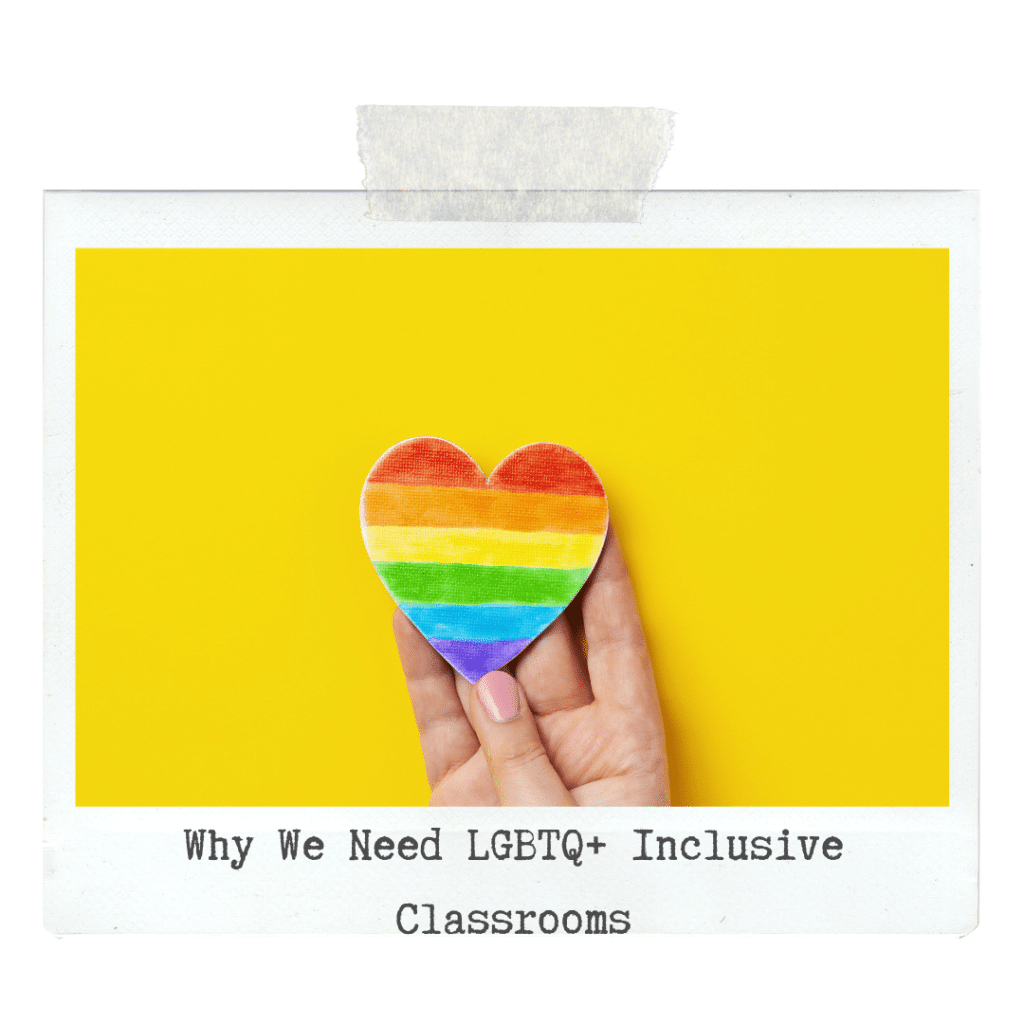