Why Would Anyone Choose to Be a Teacher in 2020? | The Educators Room

When I was a child, I used to play teacher and do lessons to my stuffed animals in my room, I even received an overhead projector for Christmas one year. But as I got older, I worried more about money and prestige than anything else; I did not want to be “just a teacher.” When I was in high school, I decided to graduate a year early which meant deciding what I wanted to do at age 16 so I could go to college immediately. My dad was and still is a sales executive and I hoped to have success like him, and I decided I would major in business.

I was a business major for almost two years as an undergraduate and I joined every club, did every interview, got multiple internships, and received awards in the business school. I was going to triple major and get ahead by doing an expensive but prestigious study abroad program over the summer before my junior year. Four days before the nonrefundable deposit was due, I had this feeling of dread and I did not want to commit to the business program anymore. I was doing well but I hated the classes and it was hard work (and not the kind that makes you feel good at the end of the day). I considered switching to education at this time, but I knew it would put me behind on finishing my degree, and I wanted to finish early again. I switched to Law, which I loved but ultimately, I did not want to be a lawyer. I considered law enforcement – I saw it as a means of working with a certain population, a population that ultimately, I wanted to positively impact. I even did a law enforcement internship and was in the process of becoming a Border Patrol agent before declining to continue the process when I realized this was not the path to the positive impact I wanted to have.

I recall about fifteen separate times in college I contacted my junior history teacher and talked to him about what I wanted to do. This kind, patient, and wise man was there to talk me off the ledge every time I started wondering what the heck I was even doing with my life. I told him repeatedly I wanted to be a teacher and he always told me I could do that if I wanted to, but each time I found a reason not to pursue it. There were many times in my last year of undergrad that I wished I had switched to teaching. Unfortunately, I felt it was too late, and just wanted to get my degree finished at that point since I was going to finish a semester early.

Before graduating, I applied to work at a charter school in my college town that would not require certification and I was excited because I would finally be able to see if I should really pursue certification. I was crushed when I was not offered the job, no doubt because ultimately, I was not qualified to teach at that point in my life. I had a connection to another charter school in the city I went to high school in, but the hiring director kept pushing me to become certified first, despite it not being a requirement for the job. But I was still not ready to make that commitment yet.

I ended up taking a sales job back home because I was desperate and had no idea where to go now. No surprise, I hated that job so much! I craved work where I felt like we were doing something important, but I was not getting that in my sales job.

I wanted to leave that job but, in an attempt to be a responsible adult, I did not want to leave without actually having a plan (even if I was living with my parents for the time being). Thus began the difficult reality of going to work miserable and coming home wracking my brain on what else I could do. After a conversation with a close friend, I decided I needed to really look back at my past experiences and think hard about the things I liked. I definitely knew what I did not want to do, but now it was time to pick out the things I did.

I loved interning for the non-profit, Make-A-Wish – but not the part where I sat at a desk all day. The thing I loved was meeting the kids, hearing their stories, and writing about them for the website. I had also been a mentor at an alternative high school in my college town that served teenage parents. I enjoyed working with a student in a difficult situation and trying to help them see their options. I had been a preceptor in college and looked forward to my 1-hour a week time slot to help other students. My favorite part was when everyone was confused about the same thing and I could go up to the whiteboard and explain it to all my peers at the same time. There were other similar experiences to these that I cherished, even if I knew the rest of the job was not for me.

In my reflection of those experiences, it became clear to me that I wanted to be a teacher. Click To Tweet

I finally realized that it was the only thing I could do every day and be happy. I contacted my old teacher once again and he set up a day for me to shadow teachers at my old high school, where I would later complete my student teaching. That day solidified everything for me, I felt so at home in the classrooms I visited and desperately craved the atmosphere of a school.

I applied to only one teacher certification program, which was a master’s degree at the local university. It also happens to consistently be ranked in the top 15 for education degrees. I was genuinely afraid I was not going to get in, and even if I did, I was worried about paying for the degree. I was scared to tell my parents that this is what I wanted to do because I did not know if they would be supportive of it – it would mean spending my life’s savings, living at home for another two years at minimum, for a job that I could still end up not liking. I decided that if I were to be admitted to the program, then that would be my sign from the universe that I should pursue teaching.

Every class I attended, the discussions we had, and the assignments we did all reminded me how much I wanted to work with kids and teach my content. It was something I had wanted to do since I was a kid but was too afraid to try. I was still scared then too; I had been saving to buy a house for years and now I was going to spend all that money on another degree! But I have memories of driving home late after my evening classes and crying. I did not cry because I was scared or unhappy, I cried because I was so excited to be doing something I cared about. After my first semester, I got lucky and my state governor created a program to financially support people wanting to become teachers, so the tuition for the rest of my degree was paid for.

All throughout college and post-grad, I was so frustrated because despite all the hard work in the internships I did and my good grades, I felt like I was not good at actually working. Teaching is the only thing I have ever done that other people not only recognize my passion for but tell me I do well. Finally!

I could not have anticipated everything that I would learn and experience in just the first two years of teaching. I was hired as a student teacher and thrown into a situation where I had to sink or swim. I swam. Now I teach at an alternative school where the majority of students have been kicked out of their high school, some have been to juvie or have probation officers, and they run the gamut for behavioral challenges. Ironically, I feel like I finally get to work with the population I was thinking of back when I looked into law enforcement, and this time I know I make a positive impact on them.

I shared this story at length with my College and Career Readiness students a couple weeks before schools were shut down for COVID-19. Many of my students do not consider college an option or even realize what their options are so I like to teach this class as a way of opening those doors for them. I wanted to show them that it is okay to try a lot of things, make mistakes along the way, and the importance of pursuing what you are truly passionate about. When I finished telling them my story, they erupted in applause, and it took everything in me not to cry right there in my portable. I finally did it.

So, why choose to be a teacher in 2020? Because you cannot imagine yourself anywhere else. 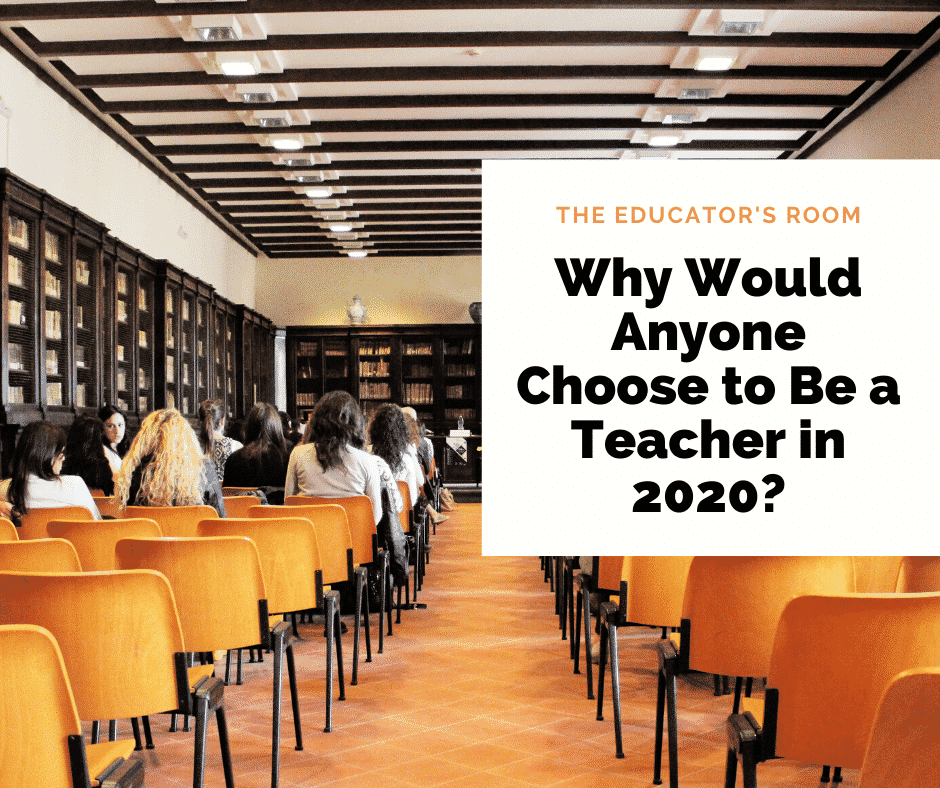