Jay Asher’s 13 Reason Why was the first young adult novel I read during my student teaching. When the librarian spoke to my freshmen about novels for a choice project, I was drawn to the premise of the story: Before completing suicide, a sixteen-year-old girl (Hannah) records the reasons for her choice on audiotapes and establishes a plan so that each person involved must hear her untold story.  The reader experiences Hannah’s story through the perspective of Clay, one of Hannah’s reasons.  Like today’s young adults, I was fascinated by the story told beyond the grave, and as an English teacher, I was intrigued by the narration style.  During back-to-back snow days, I read the entire book, and since then, I have recommended this novel to hundreds of high school students (I think the book’s content is too mature for middle schoolers).  I even cut a speech piece that was performed in front of the entire student body and Jay Asher when he presented his anti-bullying campaign at my workplace.

Over the past six years, I have watched this novel transform students as they reflect on Hannah’s and Clay’s experiences.  Imagine my excitement when Netflix announced a release date!  Former students tagged me in Facebook posts about their anticipation, and parents told me that they had never seen their students so enthusiastic about a novel.  On March 31st, I began the series...and my heart broke.  The Netflix series (although intriguing) taints the original story’s beauty; the book’s powerful message is lost in drama, exaggeration, and scandal.  Due to the mature rating, I do not feel comfortable recommending the series to high school students.  Like so many other book-to-screen adaptations, a life-changing novel has become a grotesque spectacle.  However, when I reached out on social media to see what others thought, I found something interesting: adults and young adults have drastically opposing viewpoints.

Asher’s novel is filled with real, relatable characters and situations; whereas, Netflix’s portrayal creates suspense and intrigue by magnifying the characters and plotlines.  In interviews, Asher explained that several plot points are inspired by his own school experiences.  The novel has scenes of teenage drinking and sexual promiscuity, but the Netflix show amplifies these situations and includes drugs, murder plots, physical violence, gun usage, and graphic (almost pornographic) teenage sex scenes.  I’m no fool; I know that my students consume mind altering substances and are more worried about their reputations than their grades, but after six years in education, I never observed evidence of the extremes depicted in the Netflix series.  However, I’ve seen several young adults post praise about how “real” the series is.  One college student told me, “I will say though, that my favorite thing about this series is that it makes it uncomfortable to watch...I don't believe that suicide/rape/drug/alcohol abuse was glorified, but I do appreciate these scenes because whether we all want to admit it or not THIS DOES HAPPEN in high schools everywhere.” It is terrifying to think the dramatic series is everyday life for students.  Regardless of perception, we need to discuss these topics, but I’m not convinced that the graphic portrayal of the Neftlix series is the best vessel.  Asher’s original story could have taken place in most communities in America, but the Netflix version is one mainly suited for television.

Netflix’s dramatic plot detracts from the novel’s life-changing message: Be kind because you never know how your actions affect others.  In Asher’s novel, the characters who receive the tapes seem remorseful (for the most part); Clay notes changes in several of them.  However, in Netflix’s version, most characters grow more ruthless; they are concerned about saving their reputations, no matter what it takes.  Even Clay isn’t immune; he battles with his desire to seek revenge.  I watched in horror as a character that I admire so much became a complete stranger.  In a 2009 New York Times article, high school students recounted lessons that they learned about being careful of what they do to others.  In reading reviews of the Netflix show and reaching out to friends, I haven’t heard echoes of this message because it’s lost in the drama. In fact, a high school teacher told me, “The kids are talking about the show 24/7, talking about the characters as if they're real people. What's struck me the most is that they seem to have more empathy for Hannah than they do for their fellow classmates. I'm not sure it's clicking with all of them that the kids in that show are going through the same pain kids in their classes are in real life. They talk about how awful a character is then share a fight video a moment later, call a girl they've never had a conversation with a bitch, etc.”  On social media, audiences seem to be more focused on the fiction instead of life applications.

Last fall I wrote an article about why we need to have an open conversation about depression and suicide.  In that article, I listed three novels that I’ve used in the classroom, including Thirteen Reasons Why.  I never considered the novel to romanticize suicide.  Most readers don’t remember how Hannah died because her actual death isn’t a scene, just a brief mention.  However, the Netflix series very graphically shows Hannah’s death and body discovery (different suicide method than the book’s plot- which makes me question Netflix’s motive).  That’s what I remember from the show: her death scene.  When I finished reading the book, I thought about all of the “little things” that added up, and I desperately wanted to rewrite the story, so Hannah could receive help.

In a 2015 interview with Entertainment Weekly, Asher said that readers realize that Hannah could have changed her course and that for some readers, this realization changed their lives.  Hannah has people who care about her, but she shuts them out.  When Jay Asher spoke at my school as part of his 50 States Against Bullying campaign, he talked about his hope that readers would realize that it’s never too late to seek help.  As previously stated, Netflix twists Hannah’s reasons and amplifies them.  By the end of the twelfth episode, I turned to my husband and said, “Well, I’d probably be considering suicide too.”  Never once did I have that thought while reading the book.  NBC News (and several other sources) published an article warning parents against letting their teenagers watch the show, claiming the series “glorifies suicide.”  In this NBC News article, a medical director is quoted saying that the Netflix plot is an “extended revenge fantasy.”  Once again, I never interpreted the original story that way, but I can certainly apply the term to the adaptation.

Hannah’s farewell on the tapes is a simple, “Thank you.”  She hopes to be heard; she wants someone to know her story.  These two words are removed in the Netflix version, and I think it drastically changes Hannah’s purpose.  Additionally, I worry about Netflix’s intent with season 2- the finale hints at more violence to come.  However, I am encouraged that some young adults are praising the series for starting conversations: a high school senior wrote to me, “ For me personally Asher and the writers of the show showed the deep truth that when you're TRULY depressed every single little thing gets to you”; another senior commented, “it led me realizing that suicide is real and that it is a major problem today. The series definitely portrayed what goes on to why someone, such as Hannah, [would] commit suicide”; and a graduate student wrote, “I think the show is an anecdote that depicts one way suicide can manifest, and it is successful in getting people to talk and think about suicide and mental health.” Their words give me hope that fruitful conversations can begin with watching this series, however, I will always advocate that the novel is a better vessel.

Last week I talked to a high school senior about the Netflix show.  He said that he has no interest in reading the book, because Netflix’s adaptation was good enough entertainment.  That’s heartbreaking to me.  The novel changes lives.  The novel ignites much needed conversations.  The novel is relatable.  We all know that young adults will continue to watch Netflix’s show, so I encourage parents and educators to create a learning opportunity.  Save.org released talking points, and the National Association of School Psychologists also provided resources for discussion.  If anything, I’m thankful that the series reminds adults of the dangers of avoiding discussions about bullying, depression, and suicide.  The Netflix characters don’t see adults as a resource, so we need to work together to change the culture’s viewpoint. 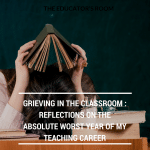 Rat Infestations, Permanent Voice Damage, & Grieving In the Classroom : Reflections on the Absolute WORST YEAR of My Teaching Career

Respect in the Classroom: Earned, Not Expected
« Sunday Night Blues: Coping with Teacher Anxiety as the New Week Begins
'13 Reasons Why' Needs to Lead to an Open and Honest Conversation »