Most colleges and universities in the U.S. seek to provide an educational environment where students, faculty, and staff share their experiences and learn from one another. The first gatekeeper of learning utopia is the Office of Admissions at the university level. Admissions officers are charged with the important task of selecting the right students to fit the college’s culture and contribute to the college’s community.

But, what factors should a school consider? Well, the U.S. Supreme Court will be weighing in – once again – on this question during its current term. In October 2012, the Court heard oral arguments in the case of Fisher v. University of Texas, where Abigail Fisher was denied admission to her first choice school. She claims that she was not admitted solely because of her race. Fisher claims that The University of Texas’s admission policy, which is aimed at diversity, violates the rights of some white applicants.

The University of Texas has a two-fold admissions policy. The top 10% of students graduating from Texas high schools are guaranteed admission to the University. All other students, including out-of-state applicants, will be considered in a separate admissions pool, where test scores, community service, leadership, work experience, and race are considered.

This is not the first time that a university’s affirmative action program has come under siege. In Regents of the University of California v. Bakke (1978), the Supreme Court ruled as unconstitutional the Medical School at U.C. Davis’s admission policy which set aside a certain number of seats for minority students. From this decision came the rationale that race can be one of many factors in admissions policies. It just cannot be the deciding factor.

The Court revisited affirmative action in higher education in its 2003 decision in Grutter v. Bollinger. This time, however, the court upheld the university’s admission policy. In Grutter, the University of Michigan Law School’s admission policy was upheld because the Court reasoned that race was one of many factors evaluated and the admission policy did not amount to a quota system like in Bakke.

So, what does all this mean for present-day admissions policies? Wasn’t the University of Texas’s policy similar to the policy upheld in Grutter? If so, why is the Court reviewing affirmative action in the college setting just 9 years later?

Under the law, race-based policies are subject to “strict scrutiny,” which is the most rigorous standard of judicial review. It is very difficult for a state law or policy to survive strict scrutiny. The state must prove that its policy is narrowly tailored to serve a compelling government interest. In Grutter, the Court explained that diversity is a compelling government interest. Diversity is a crucial component to the educational atmosphere.

However, in the Fisher v. University of Texas case, it seems as if the Court has taken issue with the narrowly tailored prong of the strict scrutiny test. Chief Justice John Roberts asked, “What is the ‘critical mass’ of African-Americans and Hispanics at the university that you are working toward?” The attorney for the school did not have a definitive answer. But, if he did give a definitive answer, wouldn’t he be admitting that the University had a quota system, which would be illegal under Bakke? It seems to be a Catch-22.

The conservatives on the bench heavily pressed the attorney for the University about whether the admissions policy was narrowly tailored to achieve the school’s goal of diversity. This line of questioning leads me to a grave prediction. Get ready to ring the death knell for affirmative action programs in higher education because the Court will likely rule that it is not necessary anymore.

The Court will likely reason that diversity can be achieved by everything else besides race, including community service, life experience, geographic connections, etc. But, how can you speak about diversity without speaking about race? I agree that race should not be the deciding factor. If it were, then applicants would not receive the individualized consideration they so rightfully deserve. Unfortunately, we do not yet live in a post-racist era where we can close our eyes and claim not to see color. Hopefully, we can get there one day. With the achievement gap affecting minority students and standardized tests containing many cultural biases, it does not make sense to start ignoring race once the minority student reaches college.

The Supreme Court will likely not issue its decision until next year. So, we will see how affirmative action programs – if they still exist – will change in U.S. colleges and universities.

Yoshana B. Jones, Esq. is an attorney in the Metro Atlanta area and writes about issues affecting education, family, and business law. Her blog is www.thejoneslegalgroup.wordpress.com. 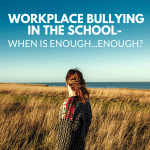 Workplace Bullying in the School- When Is Enough..Enough?

Affirmative Action at the Crossroads: Which Direction will the Supreme Court Go?
« The School Zone: Keeping In Touch With Teaching
{Ask a Teacher} I'm an Assistant Principal But I Want to be Promoted! »