David and Goliath,
By Malcolm Gladwell

I remember years ago watching a piloted TV show that was based on a character that was much like that of the popular television personality Martha Stewart. In the show, the Martha character looked to her TV mother and said something like, "Thank you for withholding just enough love from me to make me into the overachieving success that I am today."  I remember it well, even though it was years ago, because it made me wonder what made people successful. Was it privilege or the withholding of privilege? Was it intelligence or persistence? Was it advantage or disadvantage? It wasn't until I recently read a book by Malcolm Gladwell called David and Goliath that highlights many stories of people that faced harsh disadvantages in life (yet used those disadvantages in their favor) that I thought of that quote from the TV show from long ago and wondered, what exactly makes people successful?  Gladwell's argument in the book is that people that face overwhelming odds produce greatness because the "underdogs" tend to create opportunities that make the impossible, possible.  Gladwell challenges the ideas that more is always better, stronger always wins and one way is always the right way. Perhaps you are the person that has always fallen into the norm, perhaps you are a teacher that always looks for the perfect looking/acting student to be the one that you know will succeed. Perhaps, you feel that there is always a perfect line or standard that produces success. Perhaps you feel that you can spot a future success a mile away, but, like Gladwell, you should or rather need to come to the conclusion that it's often the disadvantaged that just might surprise you in the world of success.

According to Gladwell and his studies, he states that people frequently underestimate the freedom that exits in what most people would view as a disadvantage.  One example Gladwell makes is his theory of the "Little Pond." He makes quite an intriguing argument that being in a Little Pond can maximize your chances to do what you choose to do in life.  He gives the example of students that feel that they have mastered a subject at a good school can have the same feeling that they are falling farther and farther behind in a so called "really good" school. How you feel about your abilities matter. Your self-concept matters. According to his studies, many feel demoralized in overwhelmingly large settings and drop out.

I work at a school that would be for all intense purposes called a Little Pond. The population of our town is a mere 4,485, according to the 2012 census, yet  in 2014  we were proudly ranked #8 by US News and World Report as one of the best high schools for college prep in Kansas.  We were surprised, yet we weren't. If Gladwell were to look at the statistics and compare his Little Pond theory and put it into action, it would definitely apply to our high school. Why? Simply because bigger is not always better.  Sometimes greatness can come from the underdog. Sometimes greatness can come from the Little Pond.

Another interesting theory that Gladwell puts out there is that people that are seemingly disadvantaged, find other unconventional ways of coping with their disability, or lack of talent, and create new, innovative ways of solving a problem. He gave the example of David and Goliath from the Bible (hence the title of his book). In the biblical account, David, a lowly shepherd boy was tired of the Philistine's threatening the Israelites and stepped into taking on the particular threat of a giant of a man called Goliath. David was not a warrior, he was a shepherd, so he took the tools that he was used to using, instead of warrior armor that was offered to him, and quickly slew the wicked giant.  Gladwell goes on to state that many people will use what they know in unconventional ways to solves conventional problems.

When I was asked to take over a summer theater program in our local town, I was taking over a program that the theater was no longer interested in keeping around. It had become too expensive to run, and ended up costing them more time, money and energy than they were interested in taking on. They told me that I could still have the musical at their facility, but we had to rehearse in another building, and they wanted very little to do with what we did other than retain the money from our ticket sales. I told them that I would direct it, and take it over, but only if I could run it on my terms. They agreed. At that time I had never directed a show in my life. I had no idea what I was doing. All I had ever done before was help in some small way. I just sat down and thought to myself, I don't care how other people have done it, I'm going to run it my way, because no one really seems to care anyway. Seven years later and I'm still directing summer theater. I have watched it grow into an extremely successful project. Suddenly the theater enjoyed having us around, wanted us back and even managed to bring in small profits to the struggling theater. This year we had to add another session to the program because we nearly doubled the applicants for the academy.  Why the success? Because I didn't know HOW to direct, I took what I thought made sense and did it. It worked. I automatically tell my cast & crew members, that I don't do things the way everyone else does, but what I do works. Why? Because I do what makes sense to me, I don't necessarily follow the norm. I'm not conventional, but I'll put on a great show that the audience will like. I, like David, used my disadvantage to create an advantage.

Battling Giants as a Misfit

Gladwell argues that it is often the variance from the norm that creates success, and that success often comes from the inability to follow the norm. When people can't read, they become great listeners. When people don't fit in, they carve niches.  When the disadvantaged come by way of the unconventional, success will often follow. It's a radical concept, yet one that needs to be considered. When our job as teachers is to bring about the success of others, the study of success and all it's pathways, just may be the number one thing that we as teachers should be mastering. 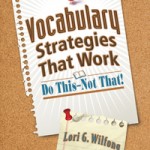 The Queasy Mix on Social Media
« The Traveling Teacher: NEA's Rep. Assembly in Denver
Integration: Bringing it Together For Kids »