I am an immigrant—digitally speaking. Like many born in the late 70’s, I have fond(ish) memories of hovering over my Brother WP 1400D, busting out a 14 page essay due the next day. I used card catalogs, bound journals, and microfiche for my research. I didn’t even have an email account until college, much less own my own PC. Like any immigrant who does not learn a language as a child, building a relationship with my new language was slow and filled with trial-and-error. It involved viruses and embarrassing conversations with my roommate about whether or not Bill Gates was really going to give thousands of dollars to those who forwarded his email (even now I blush admitting that one), but, eventually, I got to a point where I was fairly fluent.

Or so I thought.

As anyone learning a second language knows, the true test is conversing with native speakers, something that I now do on a daily basis. My teenage students have never known a life without a form of some computer, and as I work to incorporate more technology into my classroom, our fluency gap is glaringly apparent, evidenced by knowing smirks when I warn about sites blocked by the school server or hands that shoot up when I explain a process followed by, “You know there’s an easier way, right?”

What I quickly discovered was that while we were speaking the same language, our dialects were disparate. I was reminded of a dear friend, fluent in Spanish, who studied for a semester in Spain. When I asked how it went she said she couldn’t understand anyone for a solid month. She had learned the Latin American dialect, and Castilian was something else entirely. Similarly, the bulk of my students time online was spent focused on gaming and social media, and while many could find their way around a firewall, this didn’t necessarily mean they could all intuit Google Classroom or a digital textbook. A switch from Microsoft Word to Google Docs meant a rash of uncapitalized “I’s” from students who didn’t even notice that the new program didn’t do it for them, and for some confusion abounded when I didn’t walk them through each function of a site they hadn’t seen previously.

Beyond that, I found a number of my students struggling with how to organize themselves online. Trying to find an early draft of a paper meant going into a Google drive with no folders and opening up ten documents titled “English Assignment” until they found the right one. Quite a few students had multiple email accounts as they didn’t write down passwords and forgot the answers to security questions when favorite books, songs, and movies changed with each new thing.

However, I think my most incorrect assumption was that this is the way all students would want to work. I was genuinely surprised the first time I had a student sigh and ask, “Are we really going to work on the Chromebooks again?” Teenage luddites are the minority, but they do exist, and nothing about working on a computer feels natural to them. I have at least one in every class who regularly wonders aloud why we can’t just go back to paper and pencil.

Through all of this not only have I been reminded to catch myself when I start making assumptions, but like with any other subject, students, even teenagers, are coming in with a wide range of prior knowledge and ability in the use of technology. Just because they’ve had a device in hand since the day they could grip an iPhone, it doesn’t mean that all students come in ready to use the programs that I am relying on as I transition into a room with less paper. Once I threw out my assumptions, I was better able to facilitate by finding apps that aided organization, giving more explicit instruction, and identifying the technologically savvy students early to offer a helping hand, all the things needed to overcome a language barrier. 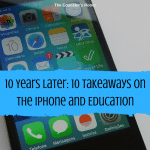 10 Years Later: 10 Takeaways on the iPhone and Education

Take Your Apps Outside

Adventures in Going Paperless: Step Two, Navigating Digital Feedback
« Maybe It's The Time Of Year: Taking Another Look At Confrontation In The Classroom
5 Do's and Don'ts for Teaching Elementary Mathematics »