According to Teaching for Change, an organization dedicated to social justice, the first full week of February promotes three demands:

Schools in Washington, D.C., Seattle, Maryland, and across the nation are embracing Black Lives Matter in Schools during February, designated Black History Month.

The Montpelier High School, in Vermont, recently raised the Black Lives Matter flag at their school.

On Thursday, February 15, 2018, the Umoja Step Team which I advise will host a celebration of Black History. The students will perform poems, songs, and dances.  There will be food and fun in the spirit of the meaning of the word Umoja:  unity.

So why am I so hesitant to buy the t-shirt posted here?  Why am I worried about asking my administration if the Step Team can support February 16, 2018, like the city to our west along that historical Erie Canal trade route?  Why am I such a coward?  Why at 44, am I still a sleepy white chick? If I can't get woke, then who can?

Affirming one thing as valuable and deserving of attention does not automatically devalue another, just as when a parent says they love one child, they are not offending or excluding their other children. Similarly, saying that black lives matter does not mean that brown, white or “blue” (police) lives don’t matter. It simply means that black lives deserve special affirmation, understanding and attention in our District and the rest of society right now.

Maybe it is those tiki torches that were held in Charlottesville, VA this summer?  And, when the president stated that there were some good people among those protestors, I wonder how many of residents of the school district where I teach agree with Mr. Trump?

Maybe it is because the Montpelier High School administration received angry calls, emails and social media comments for flying that BLM flag?

Maybe it is because I did not pay deep attention to the Trayvon Martins, the Michael Browns, and the Philando Castilles?  I cared, but not enough.

Maybe it is because my life has always mattered? I am a white, educated, middle-class teacher in a white, middle-class, school.  I have never been pulled over for driving while white.

Maybe I am scared?  Scared of standing alone.  Scared of starting a problem.  Worried about looking at what we have collectively swept under the rug.  Concerned about the names called.  Maybe a lot of white people are just like me, what Dr. King labeled the moderate white person--a group he called out for sitting on the fence for too long.

However, Montpelier High School has only 5 percent Black students--the school where I teach is only 79 percent Caucasian.

And, there were white faces on those freedom bus rides and in the marching crowd from Selma to Montgomery.

White people, especially the millions of white teachers need to answer the question:  Do Black lives matter in their schools?

Rochester city schools have decided that Black lives do matter, offering a mission for their second annual Black Lives Matters in School:

"Schools are a place to practice equity and the active engagement of teachers and students in building understanding and affirming that Black lives matter will lead to sustainable progress towards freedom and justice for all people."

Their principles include that education is the key to:

These principles are democratic and represent American values.  These ideas are the best of what the humanities curriculum can offer.  So, why is my hesitation to embrace Black Lives Matters at School so strong?  I am a social studies teacher, for Pete's sake.  I appreciate history, but I have no model of Black Lives in my education.  I have no experience from which to draw.  As a white, suburban teacher I have not needed to contemplate Black Lives Mattering because I have been drinking the color-blind Kool-aid.  I can tell you, yes, all lives matter.  No experience is more precious than any other, but to a black kid in a predominantly white school, they have minimal reference to themselves.  I, on the other hand, have had white female teachers who have educated, mentored, and fostered me.  My whiteness has been seen, reinforced, and celebrated.

The way forward is to ask ourselves, as educators, what do we value?  What should our schools reinforce and promote?

So, I ask you to consider these questions:

Do you support Black Lives Matter in School?

In the school where you teach?

In the school where your children attend?

Will you learn more?

Will you wear the t-shirt? 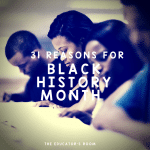 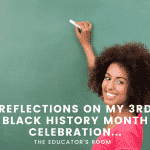 Police, Black Students, and Teachers
« Wolfgang Köhler and the Fight for the Psychological Institute
The Financial Trials and Tribulations of Teaching »