As students were prepping for a group activity, I looked across the room and gave them a friendly reminder, “Please stay on-topic until you’ve completed the assignment. No goofing around.”

Immediately a student piped up, “That wasn’t directed at me now was it, Mrs. Filler?” A smug grin was spread across his face. At least he’s aware of his problem, I thought.

“What do you think, Jeremy*? Do you think your behavior has merited such a response?”

“Yeah, yeah, I think you were talking about me. You must think I’m a bad student,” he replied somewhat jokingly. Jeremy is a bright student who, like many of his high school counterparts, expends too little energy on his studies and too much on impressing his peers with silly behavior. I don’t dislike this child, but I have had to correct him more than most.

“You know what, Jeremy? Prove me wrong. Seriously, I want you to - Prove. Me. Wrong. Nothing would make me happier as a teacher,” I countered with a smile.

Your teachers, the ones whose sighs are becoming audible as their patience and self-control starts to slip, the ones who have all but given up on the after-class talks and behavior-changing tactics. The ones who keep their distance, whose looks of disapproval are becoming harder and harder to hide. The ones counting down the days until the semester ends, the ones who visibly brighten when they realize you are not present that day. They are also the ones whose thoughts turn to you, more than the other students – even more-so than the brilliant, well-behaved child who gets the most praise. They worry about you. Is this just a phase of adolescence? Will it simply pass with time and maturity? Or is this an indicator of troubles that you are concealing behind your classroom antics? These questions often cross their minds. Above all, though, they want you to prove them wrong. Prove to them that you are not a troublesome kid; prove to them that you can rise above whatever struggles you face; prove to them what you are worth. You are worth something, but like everyone else – you’ve got to prove it.

Your parents who tire of the phone calls. The bad grades. The arguments. The slamming doors. Prove them wrong, too. You are better than your defiant attitude, your blemished record, your rebellious nature. Show them what you are really worth, too.

Your classmates who know your reputation all too well. They, too, tire of your tomfoolery and seldom enjoy their time spent with you. They frequently ponder why you bother attending classes at all since you don’t seem to take your education seriously, why you constantly disrupt their learning. Prove them wrong; show them that you have earned your seat in the same classroom as they, and that you are somebody worthwhile, too.

Your principal whose head begins to ache whenever you darken his office yet again. Who winces whenever yet another discipline form with your name on it slides across their desk. Who shakes his head as you leave the office with your carefree mask covering your face. Prove her wrong, too. Make him proud to one day say, “Yeah, I know that kid. It was rough at first, but when he (or she) finally decided to get it together, we knew what that kid was really worth.”

Priceless. Invaluable. Significant. These words describe you. Sure, you could keep this truth hidden away to yourself and decide, “What I got to prove, anyway? And why to those people? What’s it matter, anyway?” That’s fine. Do it for yourself, then. You understand what it means that actions speak louder than words, right? If you’re worth something, and I know you are, then show it. Show me. Show us. Show them. Most importantly, show yourself.

So, “bad student,” just in case you think you have successfully hidden yourself behind a little ol’ label, think again. YOU ARE WORTH SOMETHING. And I am not kidding when I ask you, plead with you, beg of you - prove me wrong.

Flipped Learning: What My Students Have Taught Me 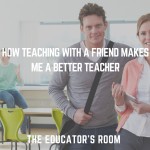 CONVERSATIONS WITH CRAIG: How Teaching With a Friend Makes Me A Better Teacher
« #SATCHAT’s Coalition of the Willing Should Be in Teacher Ed Programs
Our Dirty Secret: Teachers Have Feelings »