On an Easter Sunday, decades ago, my pastor baptized me into the faith. I do not exactly remember the words - but to an extent, they were, “buried with Christ in baptism, raised to walk in newness of life.”  It is all symbolic of letting go of your past sins and receiving a fresh start.  Springtime is another physical representation of this when the old deadness of winter has blossomed into a burst of color.   Mythology and Native American culture also have their take on this renewal of hope with the Phoenix.  This legend states when the phoenix dies, it bursts into flames and a new and improved version rises from the ashes.  In education, COVID-19 has forced us to change in ways we've never imagined.

In 2020, so many things changed in many professions, yet teachers underwent a huge shift of thinking.  Yes, we are good at “modify and adjust” but 2020 amplified it 100x.  Many are still struggling with the changes forced upon us.  During this dumpster fire year, we’ve risen from the ashes.   2020 also brought to light more of our nation’s sins through Black Lives Matter protests sparked by George Floyd’s tragic death, Breonna Taylor's murder, Atatiana Jefferson, Botham Jean, and many many more innocent black lives lost.

This time last year, I began reading Stamped Racism, Antiracism, and You by Jason Reynolds and Ibram X. Kendi.  I am rereading it because I feel compelled to try to understand the why behind racism.  I know I will never fully comprehend, but I do not want to be ignorant any longer.  I owe it to my students - of all races - to do better.  So in reading this eye-opening book, I am realizing I need to put to death some archaic mindsets I had been raised with even though I never really accepted those teachings.  They just sounded wrong.

My mama, bless her heart, had some good qualities; however, she had some warped ideas regarding race taught in church when she was younger. Unbeknownst to me, she tried to indoctrinate me into the craziness as well - like Black people were cursed because  Ham (Noah’s son) dishonored his father upon seeing him drunk and naked.  Noah later cursed Ham’s son, and some warped the idea that it meant they were cursed to be Black.  My mother was also taught that when Cain killed his brother, the “mark” placed on him meant God turned him-Black. All of these teachings were used in the Southern church to justify evil from the pulpit.  With my mom growing up in a  sundown town, I was reminded by these racist teachings every time we passed the billboard with a Black on it and a warning that if you were Black you were not be caught in McCleansboro.  However even as a child, the image and words made my skin crawl.

Why Do We Need To Be Born Again!

As an educator who teaches in a diverse classroom, it may be hard to believe the cruelty thrust upon people of color on a daily basis because we love our students and do not mistreat them.  You’d think we as a nation had grown in our thinking and realize how wrong our ancestors were.  Yet, racism is still there.  Two weeks ago, Atlanta suffered a blow to their Asian community as a shooter purposefully killed 8 innocent people.     The primary motivation stems from racism, pure and simple. Cpt. Jay Baker claims the shooter  “had a bad day”, yet Baker’s own Facebook page had an image of a T-shirt stating "COVID-19 Imported Virus from Chy-Na.    See what I mean?  As stated at the beginning of this paragraph,  when I see the beautiful faces of my students, it breaks my heart thinking that others misjudged them solely based on their skin color.  That evil person purposefully seeks to kill them or other members of their family or wear T-shirts with idiotic rhetoric.  These mindsets cannot change on their own, but they must in order for true change to occur.

A former student told me that a neighbor called the police on her daddy, a tall Black man, as he walked the perimeter of his home making repairs - his own home.  The police asked for proof that he lived in his OWN HOME.  This family lived in one of the more affluent neighborhoods in our town and her daddy practiced medicine as a neurologist.  None of that mattered to the neighbor.  My student’s family had lived in this home for at least 6 months at this point.  It broke me inside.

I’d originally thought it was okay to “not see color” or be “color blind” since my youth group touted this idea.  Sounds good in theory, but it’s wrong.  In reading Stamped, I am beginning to see I need to become more anti-racist and move toward “where no racial group has more or less or is thought of as more or less.”  In an antiracist America people no longer hate on racial groups or try to change racial groups.  An antiracist America where our skin color is as irrelevant as the color of the clothes over our skin.”    Isn’t this exactly what Dr. King dreamed for our nation, and his own children?

I am only one teacher; however, this should not make a difference.  When colleagues begin making disparaging remarks about a student of color, we need to step in and stop the nonsense.  When another coworker makes a racist joke, be bold enough to say “that is wrong and not funny.” Maybe others will stand up as well.  If we model the appropriate responses in our classrooms, this could begin a ripple effect with our students.  I’ve been in schools going above and beyond to protect children from peanut allergies with signs proclaiming “Peanut-free zone”.  What efforts are made to protect our BIPOC and LGBTQ students?  I’ve had both my Black students and Hispanic students say they are not the same person at home as they are in school because they feel safer “blending in” with everyone else - meaning the 80% white population at my school.  So my students could not be who they truly are and that’s wrong.

I’ve been in schools going above and beyond to protect children from peanut allergies with signs proclaiming “Peanut-free zone”. What efforts are made to protect our BIPOC and LGBTQ students? Click To Tweet

Recently, my oldest daughter asked, “Since your mom was clearly racist, how come you were not?”  While it was a good question, I knew as a child that my Mom’s ideas did not sit well with me.  When I decided to “rebel”, I chose to make friends of various races and bring them to my home just to make my mom uncomfortable.  I just chose not to follow her example.  I am thankful I will have a chance to instill the right vision with my new 5-month-old granddaughter.  My granddaughter attends daycare, and fairly often I’ll see pictures that her teacher posts of playtime with other infants.  Playtime for her age group primarily consists of grouping a few infants together for “tummy time”, but it is a start.   One photo just made me smile and hope for a better future for both her and her new friend - a precious little Black baby girl.  Both babies had big smiles as they played together on the floor.   I pray for a better world for my granddaughter and her little friend; however, it’s up to us to make that happen.

In the season of death and resurrection, I need to put to death my old ways of thinking and walk in a new mindset. I wish I had concrete answers on what to do. I just know for me, I need to continue to change and hope others will notice and follow suit.  I need to be cognizant of all of my students' needs.  I need to advocate for my students.  This is not a time for us to believe “Oh, someone else more qualified will lead the charge for change.”  No, the time is now; we need to be the instrument for change. 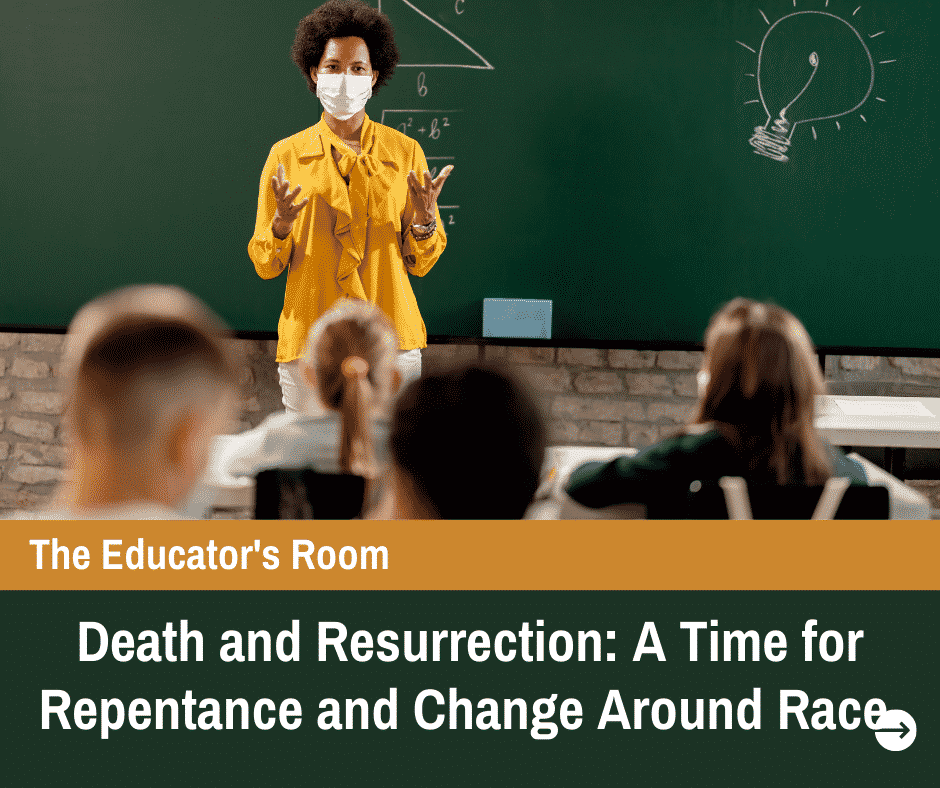 Reynolds, Jason. Stamped: Racism, Antiracism, and You: A Remix of the National Book Award-Winning Stamped from the Beginning. Little, Brown & Company, 2020. 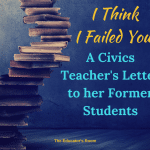 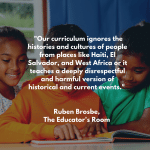