The current craze in education is around giving students choice in what they read in an attempt to get them excited about reading again. This idea as basic as it has "lit" a fire in teachers in demanding that students have a variety of texts to read in (and out) of class. As a teacher and avid reader, I understand the thrill of loving a book and being able to emulate that feeling with students.  The intense joy of putting a book in the hands of a reluctant reader and them not only devouring the text but asking for more books that they see themselves in is what all teachers crave.

However, while the conversation of choice in reading is one that must happen in K-12 classrooms across the world, there's one missing piece from this conversation that continues to get lost- the lack of books in schools.

In order to have a culture of reading in a building, schools must be willing to invest in books for all students to read. I'm not talking about a small donation from parents or the occasional gift of 10 copies of a popular chapter from the school PTA/PTO, or those times when kids go out and buy books they love, but I'm talking about something more.

Something such as principals and Central Office officials restructuring their budgets to make buying books for schools a requirement- not an option.

As a former Literacy Coach and Coordinator, I've been in hundreds of classroom around the Southeast and one of the most pressing issues inside classrooms focused on improving literacy is that there are simply not enough books for the students to read. This fundamental flaw underlies most of the problems in the classroom because when students don't have something they love in their hands, instances of misbehavior increases and gradually students become more and more apathetic toward school. To make matters worse, schools invest a large part of their budgets on standardized testing- the antithesis of what research says helps students. Specifically, in 2012, standardized-testing cost states upwards of $1.7 billion a year overall, according to a  report on assessment finances.

That's $1.7 billion dollars that could be spent on not only more books for students, but would allow students to have reading corners in their classes, or even expose them to communities and situations that only literature can make come alive. Instead, I've been in far too many classrooms where not only are the classroom libraries barren, but any new books they have been blessed with have the highest restrictions possible- that would make the most voracious reader not want to read- so that teachers can keep their novels sets readable because they know it'll be years before they get replacements. Or, instead of novels, teachers are given textbooks that prescribe the same literature to a new group of students every single year until they fall apart.

In one classroom I recently visited, the novels were in such disarray that students could no longer distinguish the title of the books. The teacher tried to work her magic by going to the local thrift store to find titles, but to her frustration, the titles she found were far from what interested her students.

In another class, the classroom library was a little better, but the teacher sheepishly admitted to me that she only had classroom sets of the text so students could only read in class and that if they wanted to check out books, she had to tell them no, because if they didn't return them she would be charged for them at the end of the year. She lamented that students were forced to use outdated (and culturally dead) textbooks that made them HATE reading even more.

As I listened to her plight, all I could think was, "when did we get to this point?" When did everything else (test prep, exorbitant salaries of the high-ups, senseless programs that no one will ever use, etc.) become more important than making sure our schools were literacy-rich centers of learnings around books? When did our school libraries become victim to budget battles leaving them barren to the memories we have of our childhood of walking into our neighborhood library and being immediately mesmerized by the sheer amount of books? Even though I can't pinpoint the exact breakdown in the love for literature, the solution is clear- books must be put in the hands of teachers/students at every chance.

As we think about this shift in budgeting, it's critical to know that our purchases should reflect the diversity found in the world with titles such as The Hate You Give or American Street so that we can help make our student's worlds bigger. Also, there should be less of an emphasis on our students and their reading levels and connecting them to a text that they identify with and want to read.

It's not an easy choice. Principals and school officials may have to make some hard decisions, but putting books in the hands of students can never be a bad decision. So start with these solutions:

So as we 'inch' towards the end of the year, principals and district officials to examine their school budgets and for every "test prep" item, we ask that they fill those with books for students and continue until their schools are truly epicenters of literacy. 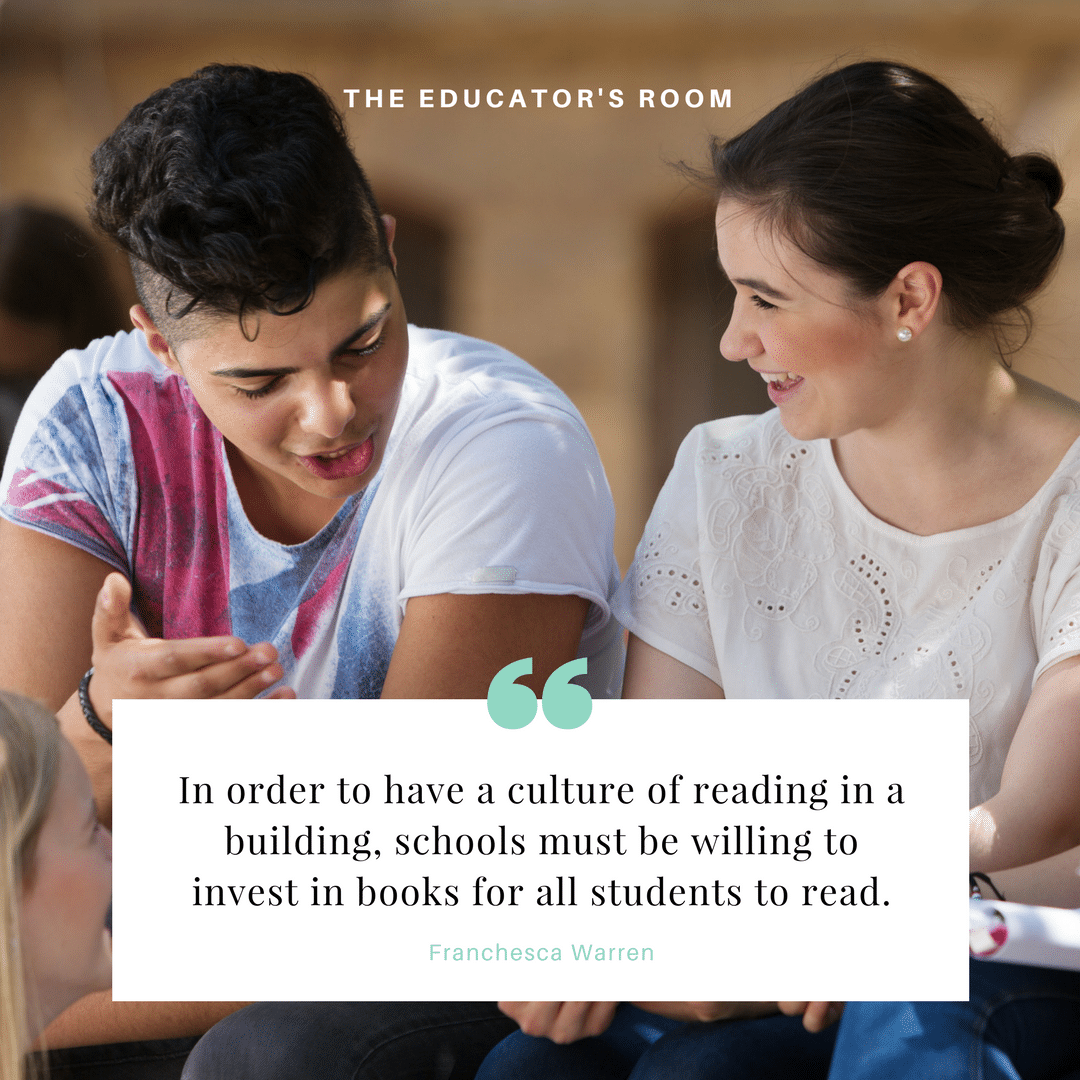 Give Students What They Want to Read for Reading Practice
« Janelle Monáe: Our Students' New(ish) Role Model
This is America...Unpacking the Layers of Violence Our Students See »