Yesterday evening, Donald Glover (aka Childish Gambino) debuted a new video entitled, "This is America" and for the past 24 hours, I've been entranced with the layers of  symbolism in this video dealing with racism, violence, gun control, etc.. Before I go any further, I have to be honest. Up until two years ago, I had no idea who Donald Glover was, but after being sucked into his hit show, Atlanta, on FX and I became a huge fan of not only his acting and directing, but his music under the moniker, Childish Gambino.  In true teacher fashion,  I've watched the video over a dozen times as I think about how my former students would react to a lesson about the symbolism/message from this video.

Note: My general rule in my class was that if students were old enough to experience (insert tragedy) they were old enough to discuss it-within parameters. For this video, I'd recommend high school age children- with a permission slip.

As I watched the video, I began to think about how Glover's message should resound with educators around the world as we are enthralled in debates in the teacher's lounge and our school communities around gun violence, racism, and the obsession with social media our students seem to experience daily in our schools.

In this video directed by Glover's long-time collaborator, Hiro-Mural, we witness a shirtless Glover as he:

However, as simple as these scenes seem to be, the real message for me as an educator is the obvious message the Glover is telling around gun violence and children.

In the opening scene as Glover dances, he abruptly shoots a hooded guitarist and who so swiftly gently grabs the weapon and whisks off with it? A student (dressed in their school-day uniform of grayish pants and yellow button down top) who gently collects the weapon in an ominous red cloth.  As Glover continues to dance and sing throughout the chaos, he momentarily joins a choir singing and then opens fire on them (reminiscent of convicted killer Dylann Roof) with what looks to be an AR-15 rifle and as soon as he fires the same child collects the gun so carefully in the same red cloth.

To add to the layers, the symbolism of the guns being so delicately taken away in both scenes was not lost- it signified that even after such atrocities (mass shootings, innocence lost) the one thing that's most valued is how America values our guns over people. Also, to add additional layers, in both acts of violence, the same child comes and gently picks up the guns in both scenes- a reference that children have to do the work on gun control that adults refuse to do.

At this point in viewing the video, I noticed the fixation on the color red and the flashes we see throughout the film (i.e. a person in a red MAGA hat chasing someone, the dancing on the red car,  blood throughout, the red shawls on the robes of the choir, etc.). Is this a reference to the bloodshed in America through violence?

Even though it's only half-way through the video, it's obvious that Glover is ready to have a conversation (that many will not) about how America glorifies its guns over people and how children many times have to 'clean up' the consequences of adult's actions (or lack of).

Not to be outdone, Glover is also sending a message around how America uses entertainment to distract from the world around us throughout this video. Almost immediately, you notice there are five students engaging in synchronizing dancing with Glover as the horror unfolds around them.   Despite the violence surrounding them, the kids (and Glover) dance and hold a smile- oblivious to the world happening around them.   For me, this struck a chord because how many times have we as educators been told to "just teach" and ignore what's happening in the world around us. We saw this when students staged walkouts to protest gun violence with some schools opting to punish students for exercising their right to assemble.

Also, seeing those students smile and dance immediately made me think of numerous schools around America whose students are filmed 'lock in step' to the latest dance craze all while assuring the public that views the video on social media that this helps them learn. To add another layer, as teachers, we've witnessed our schools focusing more and more on what looks good (i.e. fake learning/teaching) instead of discussing issues (racism, police brutality, violence, etc.) that are literally killing our students.  Which makes me think, is the dancing and singing we see  (both in the video and in these schools) a distraction from other issues that cause our students harm?

Not to be lost, there's a scene as the students and Glover dance, where another group of  students are filming all that's going on (cars abandoned, the man running with the tiki torch, someone attempting a suicide at 2:12, the minstrel pose, and the other general chaos) with their mouths covered- but they're doing nothing to stop any of the violence. Instead, they're ready for their social media moment of fame with their mouths covered.

Is Glover sending a message to our generation of students who are quick to film violence and not stop it? Or is he saying that adults have made such a mess of this world- that that's all kids can do is film what's happening? We may never know, but I would use this instance to have a teachable moment with my students about how desensitized to violence we as a society has gotten.

Despite watching this video for 15 times, I'm still finding new things and I'd love for you to watch and tell me the symbolism you see! Note: This video shows graphic violence and before showing this to ANY student, I'd seek parental permission and/or opt to show it to high school age children.

Clearly, A Conversation About Gun Control in the United States Has to Happen

The Perils of the United States of Smug 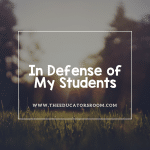 In Defense of My Students...From a Teacher in Florida
« The Dirty Secret of Implementing Independent Reading: Fund What You Believe
The Declining Mental Health of Educators »