Maybe it’s the recent passing of my father.

Or maybe—as much as I hate to admit it—I am entering the autumn of life and the third quarter of a teaching career.

Recently, I have begun to consider the possibility that the story I have always told myself about my life and teaching career—a familiar teacher tale about the colossal impact we make on so many lives—doesn’t really align with a deeper and darker reality.

I know these reflections are a bit ghoulish and macabre, maybe even a little bit indulgent, but that doesn’t make them untrue. So, here is a dark divulgence: I am rethinking what my funeral will look like someday. Or, to be more specific, I have begun to re-think who would take the time and effort to actually attend my funeral.

You see, my father was an extraordinary teacher—beloved by some, feared by some, but absolutely respected by all. His death was met with an outpouring of notes and messages from members of the community to my siblings and me. His death commanded a prominent story in the local paper. I grew up knowing my father was a man of titanic substance. Legions of former students would stop by our house years after graduating to tell him just how much he changed their lives. When my father discovered FACEBOOK, the world tilted just a little bit towards my childhood home.

Thus, when I walked in the church with my fellow family members on the morning of his funeral, I was utterly aghast and overwhelmed—not with sadness that he had died, not with anxiety about the eulogy I was about to deliver, and certainly not with relief that his suffering had finally ended.

I was utterly scandalized the church was so empty and barren. I tried not to show my anguish or shock. The church was not especially large and it wasn’t even a fourth full. I wanted to lean over to my wife and say, “If Dad is looking down from heaven, he’s gonna be more than a little pissed about this turnout!”

Was it COVID? Was it the fact he had been retired for seventeen years? Was it possible that most of his former students had merely scattered across the country and couldn’t make the trip? I thought about some of his favorite students of all time. Almost none of them were there. I thought of the former students he had kept track of over the decades and endlessly bragged about, yet precious few were actually in attendance.

I remembered the funeral of the greatest teacher I ever knew from a few years earlier, a woman I worked beside for seventeen years who was worthy of every teaching superlative in the English language, who had won teaching accolades and awards aplenty, and who also happened to be one of my closest friends in the entire world. Unlike my father who lived a long full life, she died suddenly and tragically at the age of forty of cancer.

And yet on the day of her funeral, fewer than a few dozen former students bothered attending her funeral.

One could be a cynic and simply say we teachers aren’t as important to our students as we thought or hoped we’d be. We could conclude that teachers simply fade into virtual oblivion as life goes on for our former students, our impact continually diminished and marginalized until our eventual deaths merit little more than a perfunctory shrug or hollow sigh.

Truth be told, I am increasingly less romantic and Pollyannaish about what teaching actually means. I used to believe teaching was about making a difference in the lives of students. And I still do. But what I have slowly come to realize is we don’t make a difference in the way I once thought we did. Selfishly, and ultimately mistakenly, I always wanted students to recognize and disaggregate what each and every teacher had ever done for them in their lives. This is why, in my mind, at least, attending a funeral was a gesture of this acknowledgment. But here’s the thing: that’s not how teaching really works.

I mistakenly conceived of my job as a solo and teaching as a virtuoso activity of the mind.

Of course, students remember some teachers more fondly than others. I certainly do. But the magic and splendor of the classroom is not found in its messianic function, but in its communal capacity to shape, form, and improve the inner-life of children over a long period of time. To play a role and have a voice in such an ennobling and virtuous activity is to find a path filled with high purpose and genuine joy, even if students can’t remember everything we ever taught them. If our former students don’t attend our funerals it’s not because we didn’t make a difference. It’s because we made a difference as a member of a broader community of educators.

And yet, deep down, beneath the hopes we entertain, and even deeper beneath the lies we perpetuate to make ourselves feel relevant, there is a greater lesson about the human condition itself. We teachers would do well to remember that in the end, when life is preened and trimmed to its most basic truths and connections, it is family and friendship that truly matter.

Which brings me back to my father’s funeral. While former students were fleeting, friends and family ended up being forever—even friends from long ago, even the ex-spouses of his children, even relatives who had been distant or who had fallen away. They all showed up. So many teachers sacrifice so much for their students—their physical and mental health, their time and leisure, the possibility of a more lucrative life. Maybe, instead, we should remember who really matters in the end. 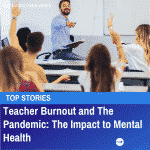 Teacher Burnout and The Pandemic: The Impact to Mental Health 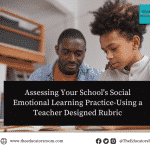 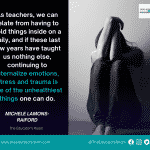 What Teachers Can Learn from the Life of Cheslie Kryst
« What E-Learning During COVID Should Have Taught Us
History Matters in Schools. Here's How I Taught it in my English/Language Arts Classroom »