December 14, 2012 is a date most teachers will never forget. This is the date of the shootings at Sandy Hook Elementary where 20 students and 6 teachers were shot in cold blood and killed by Adam Lanza who suffered from mental illness.

Unfortunately, this has not been the only school massacre in the past.
Columbine.
Virginia Tech.
Springfield, Oregon.
Chardon, Ohio.

There are many, many more.

CNN reports that America leads the world in school shootings and links these events to bullying, revenge, more major mental illness, violent role models, drugs and a greater access to guns.  I’d venture to say that the above are just the symptoms of a greater epidemic: the breakdown of the family/caregiver unit. People in the United States fall into one of two categories: Some are so focused on making more money, driving fancier cars, working high-class jobs, striving for elite college acceptance, living in large houses and keeping up with the Jones’s that no one even really knows who the Jones’s are anymore. For that matter, families don’t even really know who their kids are anymore. Or who they are hanging with. Or what they are doing when they are hanging with the ‘friends’ that aren’t known.

On the flipside, we have many families who are buckling under the pressure to have enough money to keep food on the table. We see these kids in our classrooms all the time. Mom working three jobs, dad may or may not be in the picture. Abuse, alcoholism, drugs. Little eyes seeing much more than they ever need to see. And this is the norm for so many.

Throw in the downfall of our educational system which has switched its focus from educating the whole child to merely placing a number on each child while testing them over and over and over again without raising the standards that truly matter.  We are creating frustrated, depressed, nobody-cares-about-me individuals. Toss in the amount of poverty-stricken homes sending hungry and abused children to school and this only culminates the issue. Add to this teachers who have been literally stripped of ‘teaching’ in their classrooms, who are having to focus more on paperwork and test scores than on nurturing and building self-esteem in their charges and it’s no wonder why we see the huge amount of violence over the past 17 years.

America is definitely coming out on top. Bravo.

Eighteen states so far have passed legislation that allows teachers to pack heat during their school day (as long as individual and school district laws are followed) in order to protect their students. Some districts are even paying for the training and weapons. Five more states are in the midst of ‘seriously considering’ passing similar legislature. Whatever opinion one may have on this stance, the fact still remains that we are just band-aiding the main issue.

Throughout the course of history, figures all over the world have killed and died for personal beliefs and causes. Young and old alike. But what we are seeing happen in America, to our CHILDREN and by our CHILDREN, is not an example of martyrdom, but a stance of aggression, detestable violence and hatred. We have children raising younger siblings, having babies of their own or both; parents who are checking out and some who have never even stepped up; and teachers who have their hands tied while screaming in the corners until they become submissive, complacent and just ‘exist’ in the classroom.

And we can talk reform all we want, but talk is very cheap when we have students paying for lip service with their lives. It is time for all of us to either fish or cut bait and figure out what we can do where we are, to really and truly teach what our students, and teachers, are dying to be taught.[/fusion_builder_column][/fusion_builder_row][/fusion_builder_container] 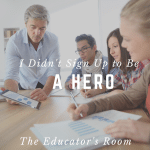 I Didn't Sign Up To Be A Hero
« The New Teacher's Survival Guide: Managing the Workload
Teaching and Modeling Persistence: Setting Goals »