Imagine walking into your classroom and seeing something completely different. Every child has been fed, is well-rested, and wearing clean clothes. Your classroom is stocked with all the materials you and your students need. As you move through your day there is plenty of time for art, music, science, and history. There is no standardized testing to distort your curriculum, nor lockdown drills to interrupt learning.

A better world is possible for teachers and the young people we serve. We can achieve it by eradicating white supremacy. To do this, we as white educators need to join this fight fully. And for that to be possible, we must understand our personal stake in the fight.

To do this, we as white educators need to join this fight fully. And for that to be possible, we must understand our personal stake in the fight. Click To Tweet

What's At Stake for White People

I remember when I was first asked what my personal stake was in ending white supremacy. The question caught me a little off-guard because I thought the answer was self-evident: Because it’s the right thing to do, and I want to do what’s right. But the questioner pushed me to dig deeper, and over time my thinking has definitely evolved. I realized with help that you cannot fully invest in a struggle that's on the behalf of others.

I was pushed by my partner, and through my work with the Center for Racial Justice in Education to figure this out. As a Jewish person of Eastern European descent, the loss of my ancestral language and culture via assimilation was one of the first things I thought about. I also thought about how white supremacy dehumanized me as a white person, but this remained more theoretical.

I remember this school year I had a conversation with a Black colleague about how coworkers saw me. She conceded that I could be, “a bit of white man sometimes.” I wasn’t surprised, but I was sad that nobody felt comfortable to tell me directly. I reflected that in my constant fear of saying or doing the wrong thing, I sent the message I was afraid of honest feedback or accountability. Honesty and accountability are key ingredients to real relationships. So by steeping in my fear of causing harm, I had actually cut myself off from my community.

Because of the systemic nature of racism, we know that white supremacy is everywhere, including education. To fight against white supremacy in education, white educators to see our own stake in the fight to end white supremacy more clearly. We can’t just see our role as allies, because this perpetuates the white savior complex.

There is a lot we gain from winning this fight. Standardized testing, underfunding, gun violence, and so many of the most horrifying aspects of teaching today are outgrowths of white supremacy. In a world where Black lives matter, we will have the freedom to be the teachers we have always dreamed of being.

Even if these were are only victories, they would be more than enough (In the Jewish tradition we say dayenu). But white educators should know we have much to win at the spiritual level as well. By eliminating white supremacy, we will gain the ability to forge real, humane relationships with our students and our colleagues.

In addition to the damage to our interpersonal relationships, white supremacy damages our relationships with ourselves. White supremacy harms white people by first encoding our psyches with a false sense of superiority. Eventually, though, we are forced to reckon with this lie. For some white people, this means realizing they will never reach the pinnacle of the prosperity and power they were promised. They maintain racist thinking, and instead, they internalize the lack of wealth or power as a personal failure.

But if we’re lucky, we see white supremacy for what it is. At this point, we have to contend with the work of building an authentic sense of self-worth, separate from the internalized deception of white superiority. We are not innately smarter or better. After years of internalizing white supremacy, the work of finding genuine self-worth, of discovering the unique gifts you have to offer is not easy.

As I’ve learned more about white supremacy, I have struggled to rebuild a healthy, and real self-esteem. As a writer, a teacher, and across areas of my life, I’ve had to constantly ask myself, “Would this be possible if I wasn’t a white man?” It’s like we’ve been winning a thousand games of chess, and thinking of ourselves as experts. Now that we know the rules have been rigged in our favor all along, where do we go?

This is what I have come to see as my personal stake in ending white supremacy — the opportunity to live my life fully, authentically, and in a real relationship with all other people. I don’t want any more ill-gotten gains. I don’t want to walk around with a sick mind and a sick heart.

It is unlikely we will end white supremacy in our lifetimes. But we can move closer to a vision of a world where our communities and our schools are healthy. As white educators, we can start by saying, “Enough!” and demanding more for our students and ourselves. 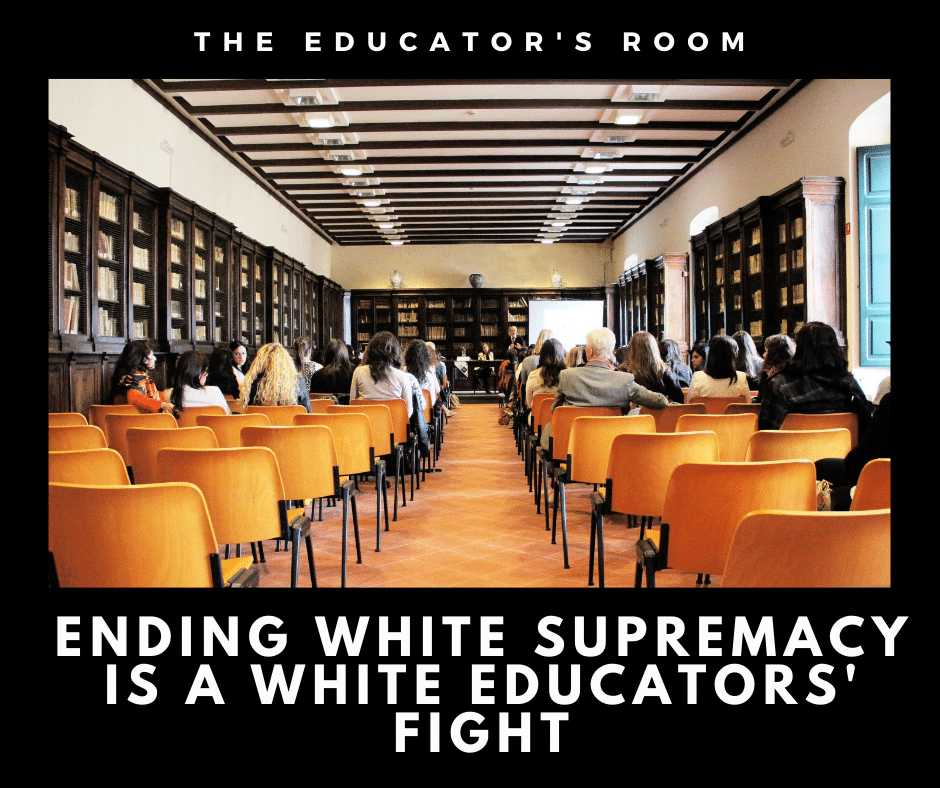 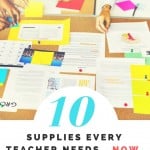 Reminders for the New Year for Teachers
« Universities Collaborate on the Biggest Experiment in Higher Ed: Reopening
This Year Will Be a Lost School Year »