During my early childhood years,  I went from the little girl who at first received check marks on her report card for talking too much to the little girl who must have a learning disability because she never spoke, participated, and demonstrated overall disinterest in school.  Throw into the mix that I cried all the time, it became a clear indication that I had something going on in my little world.  Yet, I never once recall my 2nd-grade teacher pulling me aside to ask if I was okay.  Instead, she insisted I had a learning disability and needed in the remedial classes instead.  Of course, I did not feel comfortable sharing that we had just moved to this new school nor did I share that my oldest brother had been killed in Vietnam a few weeks before our move.

Instead of taking the time to build a relationship with me, this teacher just wrote me off and made an off based assumption.  Years later during my methods classes, the professor asked what teachers made an impact on our lives the most?  Many in the class shared about coaches who motivated them or teachers who held a special place in their hearts.  Me?  Well, I shared about my 2nd-grade experience because it did impact me.  I made an inner vow that I would never make a child feel as worthless and unloved as I felt during the most difficult time in my young life.  Every child has a story or experience that they are dealing with.  Every child deserves someone in their life who sees them - really sees them.

During my Freshman year of college, I decided to basically reinvent myself.  It was a new campus full of kids my age who would not know my backstory.  The death of my brother just scratched the surface of the trauma I experienced growing up with thus reinforcing that wall I built.  I clearly remember driving up to the Baptist Student Union Building and deciding I would be different.  I would be outgoing and fun and leave the old Suzy behind.  I imagined who I wanted to be and over time that’s who I became one small step at a time.

This is basically what Automic Habits: Tiny Changes, Remarkable Results by James Clear states as well.  I made a choice, albeit thinking it small at the time, but set the course for the rest of my future.   Glenna, our BSU Director, took me under her wing and encouraged me to lead small groups, and found me volunteer positions in Children’s Ministries in town.  It was as if she saw my true potential because she took the time to --see me.     A few decades later, when I returned to college to pursue my teacher’s certification, I had the awesome opportunity to be a student-teacher for a wonderful lady who would be my next mentor - now a friend.   Ranea went above and beyond providing me the support I needed which built my confidence as a newbie.  I do not believe in coincidences, but believe we were put together on purpose. Over the course of my career, I’ve had the blessing of taking on a student=teacher as well and made it my goal to provide the best experience for them as Ranea did for me.

Today, no one actually believes I used to be shy because in my career I’ve had opportunities to present in front of fairly large crowds at conferences on the local, regional, and state level.   If you only knew how many butterflies set up housekeeping in my stomach before an event then maybe you’d believe me.  Inside, I am still that unsure little girl at times.   To get to this point, I had some amazing people in my life mentor me and guide me in this process. Later, when I accepted my first teaching position, my principal, Mrs. Jackson, also served as a mentor whether she knew it or not.  She once told me that students come from all kinds of home situations and our job is to make them feel loved, accepted, safe, and seen.

She also told me often times a child’s disruptive behavior signaled something deeper, and it was not our place to be their judge and jury but their advocate.  I knew that feeling all too well.  I’ve always tried to put myself in their shoes and realize their behavior really had nothing to do with me; my request to maybe turn in homework may have been their tipping point causing them to have an outburst of some kind.  This is why I handle these situations in private when possible and ask “Hey, what’s going on?  Is there something I can do to help?”  It does not work every time, but more often than not, when they realize that I am not going to yell at them in the hall for not having homework, not having a pencil, not having the focus, not having _______________, but that I wanted to know what was going on with them, it changes their behavior.  I’ve learned to always take the tissues with me then I do this too because tears will fall because the child realizes someone actually cares about them.  Your caring can become a catalyst for their change.

Several years ago, I heard a TedTalk by Rita Pierson entitled Every Kid Needs A Champion.  I highly recommend this to anyone working with students as a motivator and reminder of why we are in this profession.   Now, more than ever, I believe we all need a champion in our lives to survive the daily struggle we are in.  Everyone is afraid to a degree.  Not only do our students need that extra support right now, but we also need it from our coworkers.  We need someone to lean on when it gets hard. We need a champion for sure.  I also recently listened to a podcast called Dead by Tomorrow that spoke quite a bit about mentorship and the impact it can have on all age groups.  The host interviewed a young lady who shared how being mentored helped her in a very difficult time in her life and how she now is a Director of a mentor program serving boys from hard situations.  The host also mentioned a situation where he had a manager whom he admired his leadership style, but really did not want to walk up and say “Hey - will you be my mentor?” because that would be awkward.  Instead, he just watched and made mental notes and began incorporating them into his style of leadership.

My take away from this podcast, we are mentoring the people around us whether we are aware of it or not.  Also, mentorship can restore hope where it appears to be none.   As teachers, we are always in front of an audience, and now with some of us working remotely through virtual mediums, our audience has grown to include parents or others in our student’s lives.  Someone is always watching us.  I am not saying to be perfect by no means.  Students learn from our mistakes as well.  They, although may not admit it, respect our authenticity.  The people in your world, your sphere of influence, are watching how you handle situations.

I believe students need a champion today more than ever.  They need someone to show them it’s okay to scared, but how to not let it overwhelm.  I strongly believe what Rita Pierson says that students will work for someone they believe genuinely likes them.   If you were to ask me what is the key to be my success, that is.  I take time to get to know my students and as my former principal advised --see them.  So - here’s the cliff notes version - be there for the people in your life and they will be there for you.  Be a champion.  I promise you will not regret it. 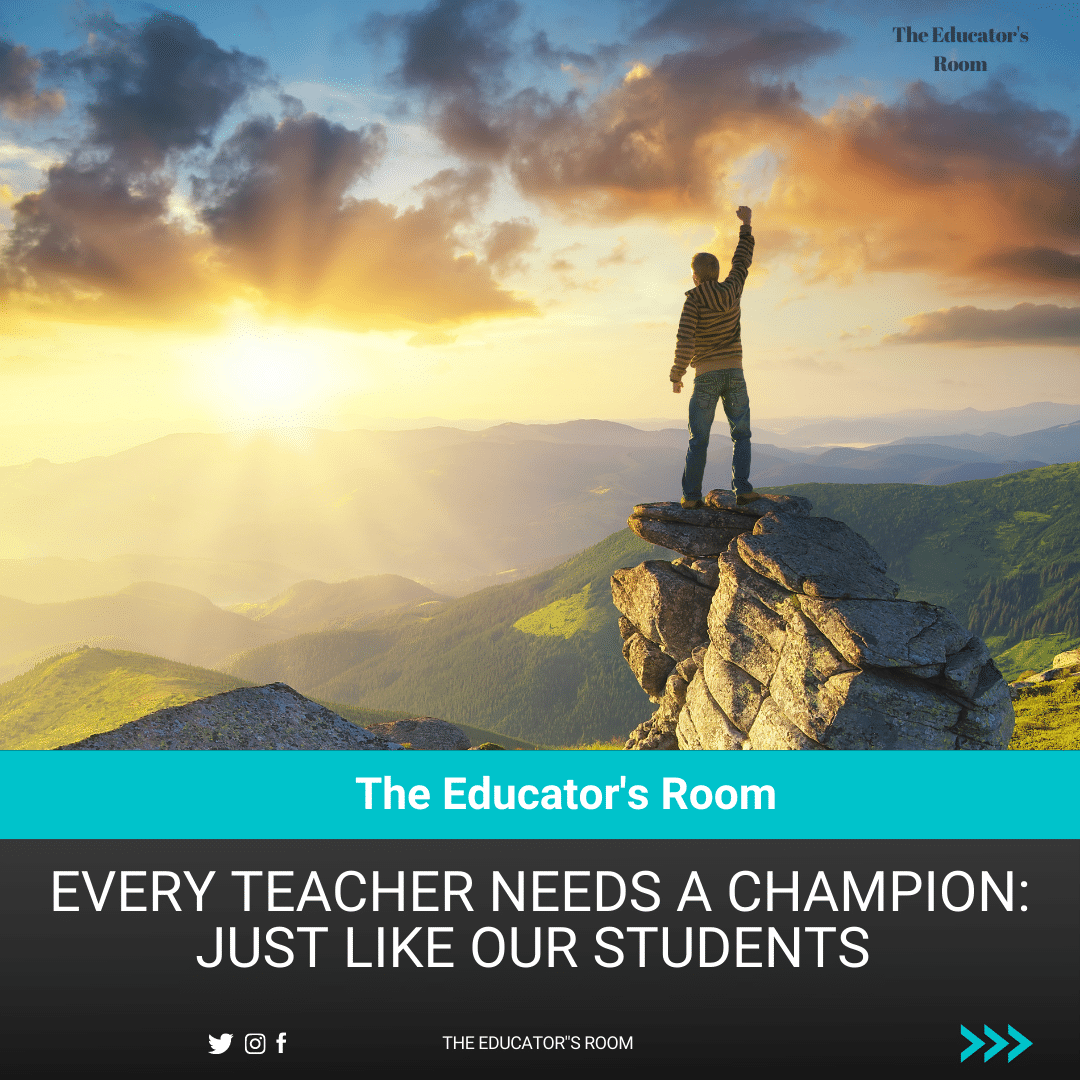 Are You Using Interactive Student Notebooks? You Should Be!

Making Connections in Reading
« Remote Elementary Teaching Sucks. Get Over It and Prepare for Survival
SPLC’s “Credit Overdue”: Why it Matters for Youth Offenders »