Being in public school education for 25 years, it was made apparent, as teachers, we were not allowed to share our Christian beliefs with our students. Every so often, it might come up with a colleague but talking about God with students would be enough to get you in some serious trouble. And I can understand it, I’m not saying anything is really wrong with it. What I would have preferred, though, it and all religions be acceptable to talk about and have present in our classrooms. As a teacher, I considered myself pretty well-versed in a lot of different topics, but I am always open to learning more, or having incorrect ideas corrected. But when schools go as far as not allowing students to wear Christian t-shirts, or pray by themselves or small groups, is a bit too far, in my opinion. Especially when there are alternative groups being heralded by administrators, media, staff, and other students. Which is all fine, and good, but what about Christianity? But then, again, I am a Christian and I am biased to my beliefs.

When I was teaching early elementary, I had a student who didn’t have a mom (she had left early in his life), and his dad was dying of cancer. In response, his grandparents, who would be raising him, got him involved in a local church. He started coming to school, wanting to talk about Jesus, share his pictures he made in Sunday School, and tell his friends about the Bible stories he was hearing at Children’s Church. And I let him. One, because it was his way to facing his dad’s impending death (all his sharing had an element of death in it) and talking about it. And also because HE was sharing with the kids and they were listening. Had I had a child who might have other stories from other religions, they’d have equal floor time.

That all said, I kept my personal views out of the conversation as I loved my job and wanted to do all I could to keep it. But as teaching has left me, and I am transitioning out of my role as an educator into whatever else God has for me, I find myself reaching to my faith in this transition. While I was teaching, I started every day with a prayer to do my best and lead through example. “Lead” as in let Christ shine through me to set a good example for my students. I always viewed children from the standpoint of Scripture, Matthew 19:14 where it says, “Let the little children come to me, and do not hinder them, for the kingdom of heaven belongs to such as these.”

My goal was to be Christ-like enough where my students could learn from my example without being obvious or, of course, preachy about it. But now, I have to change my perspective from the children to myself and my relationship with Christ. Transitioning from something you love and are good at is very difficult and complex. There are a lot of emotions, but mostly fear. Ah, but if I truly believed, there would be no fear, right? I could place all my fears into the Lord’s hands and let it all go? Right? Maybe. But I am still human. There are still those moments where I wonder where money for the phone bill, or the water bill, or food will come from. In the end, God always provides some way, some how. But just as my faith was present every day in my classrooms, it has to remain present in this time of transition. 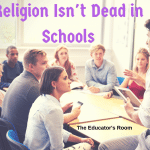 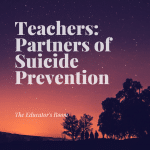 The Politics and Pedagogy of Immigration Policy
« First, We Must Educate The Heart
Letting Students Have a Say In What They Learn »