I was listening to my college-aged son awhile back talking with his friends during a study group. One of them brought up the idea of how funny it is to be in a 'study' group when none of them really knew how to study. They all had a good laugh and continued chit chatting about everything except the chemistry they were supposed to be studying. At the time I thought it was amusing. As I mulled it over through the next few days in my classroom, I realized that this is one area that I don't really teach. Even though my students are young, they still need that skill.

So I sat down with my lesson plans and figured out how in the world I was going to teach studying to a group of second and third graders.  I came up with the idea of developing several games that were interchangeable with each week's spelling words. So over the course of the next six weeks I led the kids to create six different games that they could use with any set of spelling words over the course of the year. I showed the kids, and parents, how to use these games to help study spelling words.

But did that really teach study skills?

When you get right down to it, studying isn't all about having the proper tools to study with, although that is a huge part of the equation. Studying is about a routine, a strategy, a way of developing time to focus on and retain information that has been collected in class.

So I started over.

I asked the kids what their afternoon and evening routines looked like when they left school. I knew my kiddos were busy, but I didn't realize exactly how busy they were! Between ball, dance, piano, church, scouts, gymnastics and so on, I wasn't sure how anyone was going to be able to develop a good routine for studying. When I asked when homework was done, most kids agreed that it was in the car on the way to whatever was on the calendar that evening or finished hurriedly over breakfast before school. I resigned myself to the realization that there was no way I could expect my families to adjust their schedules to incorporate a stable 'study time' routine into their busy schedules, no matter how much I pushed.

I decided that the only environment I could control was my classroom time.

After a bit of rearranging, albeit not an easy task, I started a 'study hall' time where I showed the kids different techniques they could use to study, and then taught them how to apply these techniques.

Looking back, it was really a better routine than expecting parents to incorporate these techniques without guidance. I pulled in all of the classroom games we had made and showed the kids how to self-regulate the use of them. I set up several quiet, corral-type of areas for those kids who wanted to shut everything out and be able to focus better on what they were doing. I also set up a 'study supply' area that was equipped with post it- notes, extra pencils, rulers, erasers, highlighters and anything else that the kids might need to mark their agendas or make notes. I split the 'study time' between language arts, math and a free-choice session, totaling about 40 minutes. I guided the kids, moving between them, answering questions and kept time with a timer for the first month, establishing a routine and getting the kids in the habit of using their time wisely. Once they were in the habit and knew what was expected they became a pretty autonomous group, studying on their own. Once established, it was such an easy way to incorporate a very important skill that they can carry with them through the years, no matter if they are given time in class or if they are expected to do it on their own.
How do you teach your class good study habits? 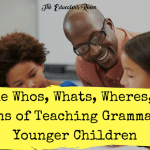 The Whos, Whats, Wheres, and Whens of Teaching Grammar to Younger Children

Carpet Time For Young Learners
« Close and Critical Reading: What's the Point?
When Life Happens While You Teach »