My High School Made Me Feel Isolated and Ashamed, Today's LGBTQ Students and Families Deserve Better

“How glorious it is — and also how painful — to be an exception.”

In 1988 I chose that quote by French writer Alfred de Musset to accompany my senior year picture in the yearbook. While it’s not unusual for teenagers to feel out of step with those around them, I believed I was such an exception that I declared it in the yearly publication.

Why? Because in the mid-1980s, I was walking the halls of an all-girls Catholic high school just as my parents divorced and my dad came out as gay.

While surrounded by the dogma of the Catholic Church, I attempted to make sense of what his coming out meant to me and my identity. For four years, I walked the halls of an institution that told me my dad was evil, he would go to hell, and I shouldn’t exist.

I had no examples of other families and no friends I could confide in. I felt so different, so out of place. Such an exception.

Thankfully, I was lucky enough to have a promising talent playing the clarinet, and the school that wore me down with shame had an award-winning concert band and teacher. That teacher–Mrs. Girdler–was a transformative energy for me. The basement space of the school, which served as the band room, became my refuge–where I could learn, be challenged, make deep friendships, and thrive. Mrs. Girdler saw my talent. She pushed me for four years until I made first chair in several select bands up and down the east coast. To Mrs. Girdler, I wasn’t an exception–I was exceptional.

Thanks to Mrs. Girdler, I muddled through high school enough to be accepted to a single university. College was cathartic, but just the beginning. It took me decades to shed the negative messages about my father’s identity as a gay man and my identity as his daughter.

That was the 1980s. But now, in 2022, I read the same messages about the LGBTQIA+ community in schools and communities. Except, unlike in my experience, which took place in a private religious school, it’s now completely overt. And worse, it’s being legislated into policy for public schools.

On March 28, 2022, Governor Ron Desantis signed the “Parental Rights in Education” bill into law. Dubbed by opponents as the “Don’t Say Gay” bill, it bars schools from teaching children in K-3rd topics related to gender identity and sexuality, and parents can sue districts if they believe the law was broken. Educators and families are already feeling the impact of the law. A teacher in Florida resigned from her position after experiencing animosity from fellow teachers and fear of the impending law. A month later, 19 other states crafted their own anti-LGBTQ education bills.

According to the Human Rights Campaign, there was an unprecedented number of anti-LGTBQ legislation in 2021. We expect our legislators to craft laws that support constituents and their communities. Instead, they are drafting laws that will hurt children and families. According to the Trevor Project, nearly half of LGTBQ youth seriously considered suicide in the past year.

As a teen, my school’s culture and belief system didn’t recognize the value of my family. It took a tremendous toll on my confidence, self-esteem, and self-worth. It was not until I left that environment that I felt I could be authentic and honest about my family. Children should not feel they need to leave an institution of learning or a community to be themselves or share their family structure.

School should be a place of safety, where learning is challenging and joyous-not where the trauma originates. But recent legislative action across the country is systematizing trauma. Children need to see their families positively represented in all layers of their life; through books, role models within the community, and supported and affirmed by laws and governance.

Last week Joe Biden signed an executive order meant to support LGBTQ+ youth in schools. But the order does not place a federal ban on discrimination based on sexual orientation or gender identity. That would require passage of the Equality Act, which has been stalled in the Senate since 2021.

There are organizations – big and small – advocating for creating affirming school environments for LGTBQ youth and families at the national and local level. GLSEN supports comprehensive local and federal policies that protect and affirm all students through educator training, advocating for an inclusive curriculum, and supporting districts as they create safe and LGBTQ-inclusive school climates. Within the San Diego Unified School District in San Diego County, California, there is a Youth Advocacy department that strives to make school a place all students want to be.

I believe we need these organizations more than ever to not only prevent discrimination but also to set a clear expectation that schools are places that support and accept all students without exception. Teachers can utilize resources from GLSEN and other groups to learn how to discuss bullying, gender roles, or family diversity. Educators can lead the way as role models of acceptance and support for students. And governing bodies everywhere–from school boards to federal legislators–must build cultures of affirmation and positive regard for all.

In the 1980s, Mrs. Girdler saved me in numerous ways. As an educator now myself, I strive to be a trusted adult for all of my students. I celebrate the identities of my students and their families. I see the value and worth of their experiences. All teachers across the country should feel they can publicly appreciate and support their students. And all children should be surrounded by teachers and other adults who see their value. Our entire society can do much more to affirm and support all families and identities. We must do better for our children.

Wendy Threatt is a 4th grade teacher at Felicita Elementary in Escondido, California. She is a 22-year teaching veteran,  National Board Certified as a Middle Childhood Generalist and a 2021-2022 California Teach Plus Policy Fellow.  Wendy sponsors an after-school STEM partnership with the Fleet Science Center and coaches with Girls on the Run. Wendy earned her BS in Mass Communications and Master of Arts in Teaching from Towson University. 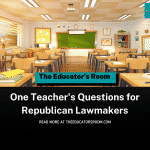 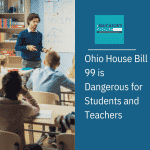 Ohio House Bill 99 is Dangerous for Students and Teachers

A Tale of Two Cities: How Taxpayers Foot the Bill for Sports at the Expense of Education
« Get Ready to Teach About January 6th
Ask The Educator's Room - Sleeping Students and End of Year Feels »