On January 6, 2021, the students in the class of 2023 were sophomores in high school. They were probably recently back from winter break, sitting in class near the end of the day when rioters smashed the first windows smashed and climbed into the Capitol building. Students saw it as it happened, or at least heard about it, but couldn’t fully comprehend it yet. Now they can make sense of it under the microscope of a thorough congressional select committee investigation.

This summer, the congressional January 6 hearings are underway. Teachers may be wondering if and how to deal with this historic moment when school resumes. After the first three sessions, I was stunned to learn new details about how the riot was one piece of a coordinated plot to overturn the presidential election. Republicans who worked in Trump’s administration have given key video testimony, making it difficult to argue that the hearings are a partisan exercise to be ignored.

"We, as educators, need to come back to school in the fall informed about the hearings. Then, we must plan how to teach them." Get Ready to Teach About January 6th Click To Tweet

Teachers of older students should no longer ask “IF” they should address it at school but “HOW.” And here’s why:

The details of January 6 are more about our country’s future than our past. The third session of the hearings alerted us to similar attacks, already underway, against our future elections. A retired conservative Republican judge, who was once on George H.W. Bush’s short list for the Supreme Court, J. Michael Luttig, was a central witness in the third session. Conservatives have long trusted him to uphold their values, which is why then-Vice President Mike Pence sought his advice leading up to January 6, 2021. In addition to solidly and repeatedly stating in the hearing that Pence had no authority to change the outcome of a democratic election, he gave this warning about the short amount of time we have to remedy attacks on future elections:

Most members of the class of 2023 will be eligible to vote in the November election following graduation. The information from the hearings can arm younger and older voters alike to participate productively at a critical time for democracy. Such information may even persuade young people to vote or work at the polls when they would have otherwise ignored the process.

We, as educators, need to come back to school in the fall informed about the hearings. Then, we must plan how to teach them. At the very least, we can ensure that those eligible to vote are registered—this isn’t just for social studies teachers! Aside from registering future voters, we need to do what we’ve always done—translate an ever-changing world into relevant learning.

How to Teach the January 6th Hearings in Your Classroom

Let this be the start of a discussion. Here are a few of my first ideas:

· Are you involved with Speech and Debate? The opening hearing, aired in prime time, lays out a compelling narrative with support for their position. Use it as an exemplar!

· Language Arts: How to build a narrative and tell a story. The hearings craft a story—use examples from them. They use loads of supporting evidence. Further, how do themes from texts you may have read relate to themes of the hearing? Some examples from the classics include:

· Drama: Have students do a monologue of the thoughts of any person represented in the hearings. They can develop what people may think and feel underneath their testimonies.

· Community service and internship advisors: Connect students to opportunities to get involved in politics where they can. The hearings are about the preservation of democratic processes and norms, and there are many ways to participate in any community. TheCivicsCenter.org provides many ways to organize to suit the needs and interests of young people, as does RockTheVote.org.

More hearings are scheduled after the publication of this piece, which means more opportunities to integrate our work as educators. The focus of the last two scheduled hearings is how former President Trump pressured local election officials to overturn results in Georgia and Arizona. Further, former President Trump continues to perpetuate “The Big Lie” that the election was stolen from him just a few days after the damning testimony presented in the hearings. More lessons from the 2020 election will unfold in the hearings. Tune in, learn for yourself, then inspire our future voters. 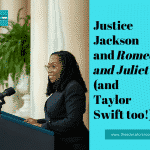 Justice Jackson and Romeo & Juliet (and Taylor Swift too!)

The Royal Wedding: Why Should We Care? One American Teacher’s Perspective
« What Teachers Have in Common With Steph Curry and the Warriors
We Need LGBTQ+ Affirming Schools Now More Than Ever »