Words never uttered can be extremely significant. Often the perception of words said (or unsaid) carry more importance than truth.

In October of 1789, Marie Antoinette did not look down at the swarming hordes of fishmonger women storming the Palace on Versailles and utter the words: “Let them eat cake,” but people believed that she did. It was a revolutionary time, and the French people have often been stereotyped as an excitable lot — therefore it did not matter if she actually said those insensitive words, or not — FAKE NEWS ruled.

More importantly, two hundred years after the incident, the words let them eat cake now serve as the embodiment of abuse of power and government ineptitude.

On December 15, 2017, the Washington Post released an article: “CDC gets list of forbidden words: Fetus, transgender, diversity," stating that the Center For Disease Control (CDC) declared seven words banned. However, the agency is claiming that a list of these banned words does not exist. The head of the CDC, Dr. Brenda Fitzgerald, stated that the seven words were merely discussed at a meeting concerning funding and funding proposals.

So what is true? Does this list actually exist? Are these words banned? Or is this list a suggestion of words that will lead to research unfunded? Does the truth matter?

Is this our “Let them eat cake moment?”

Moreover, what should teachers tell their students? Are we living a version of Orwell’s 1984, or do we simply fear that we are?  Should students avoid these words if they hope to get a job? Is this what the CDC is modeling for our youth: be careful to offend the hand that feeds you, especially if those hands are attached to Republican arms?

These 7 words — vulnerable, entitlement, diversity, transgender, fetus, evidence-based, and science-based — all have an instructional impact. Furthermore, both the definition and the application of these 7 “deviant” words allow for productive classroom discussion and higher level learning.

This is a very uncomfortable word that evokes feelings. To feel vulnerable is often to be open to attack, mistreatment, harassment, or even death. In the current political climate, many politicians might be feeling vulnerable. Maybe they are waiting for their #MeToo scandal to erupt. Perhaps, they have a list of women’s names who they are afraid to be associated. Or, possibly they are wondering how long to support the president of the United States. Yes, many established power players who make their money off of other people’s taxes are vulnerable. They will be very vulnerable in November of 2018, 2019, and especially in 2020.

Is health care a right? Should the Children’s Health Insurance Program (CHIP) be funded? Will the 2018 high school graduating classes receive any Social Security entitlements when they reach their golden years? Is public education an entitlement?

Entitlements is a powerful word when discussing economic theory with students. What would staunch laissez-faire capitalism look like in the United States? How might Adam Smith view his theory with modern eyes?

Is a 21% corporate tax an entitlement?

Classroom discussion question:  Which specific entitlements do American citizens have a right to obtain?

Henry Ford once said: “Any customer can have a car painted any color that he wants so long as it is black.” Ford was, of course, discussing a profitable business model and not race (at least not in that quote).

Consumers, however, loved being able to buy cars in different colors. That is how GM got a stake in the game, by offering cars in blue! Just look at the diversity of potato chips and other snacks in the local grocery store: Americans love variety.

Then why would diversity be number 3 on the list of possible banned words? Does the recent narrow victory of Doug Jones as Alabama's senator bear witness to the reason diversity might be a "dirty" word? Hmm...

This is a great question to explore with students: Does the United States Government genuinely represent the diverse citizens of the country?

On October 30, 2017, a U.S. district court judge slowed President Trump’s edict to ban transgender individuals from serving in the United States Military. President Trump’s attempt to repeal Obama’s 2016 measure had interesting timing as North Korea was firing rockets and Mueller’s investigation of Russian interference in the 2016 election was concurring.

Social studies teachers often explain the language of the Fourteenth Amendment to the U.S. Constitution, which guarantees equal protection under the law to every citizen of the United States. How do teachers reconcile the current administration’s attempt to curtail rights (possibly even freedom of speech) with the teaching of the United States Constitution?

Fetus, vagina, nipple, penis — all real words. If one is uncomfortable hearing or seeing such terms, maybe one should not be governing the United States! Roe v Wade, decided forty-four years ago, defines the term.  Abortion is legal.

Fetal pigs are dissected in classrooms across the nation. A fetus is a term discussed in every Biology textbook in every public school in the nation.

Where is your evidence?

That is a question many teachers ask students when essays lack analysis. Even the Common Core Learning Standards promote finding evidence from texts and using evidence-based statements in writing. In fact, students are becoming quite skilled at finding and using evidence!

Perhaps, the youth of America will use their skills to seek out a large, diverse quantity of resources to inform their voting. Hopefully, students will want their media and their government more evidence-based in their reporting and governance.

The Scientific Revolution took place during the 17th and 18th centuries (the Age of Reason). For over 400 years, scientists have been trying to prove facts to authorities who argue with science. Galileo even spent nine years under house arrest for his unorthodox ideas.

Science, however, exists — it doesn’t need to debate itself. The world is round, heliocentric, polluted, warming and endangered. It is. It is.

Words matter. Vulnerable, entitlement, diversity, transgender, fetus, evidence-based, and science-based are terms that require teaching.  These are concepts embedded into existing elementary and secondary curriculums.  These ideas are important to a functioning democracy.  It is dangerous that a federally funded agency, like the CDC, would even consider limiting vocabulary for the sake of money.  Furthermore, perception is often more important than reality.  Although the CDC is professing that they will not restrict these seven words, the perception of censorship is already present.  Queen Marie Antoinette could not change the course of history.  The French people believed that she said let them eat cake because the monarchy was not meeting the needs of its people.  The French people revolted with varying levels of success.  Americans need introspection concerning their own level of involvement in the resistance of narrow-minded policies and rhetoric that limits the freedom of individuals, especially people who may be different than themselves.

Teachers have an incredible responsibility to offer students a critical lens, especially in the fields of Science, English, and the Social Studies.  As educators, teachers must be the fuel to ignite student involvement and participation in their government. In every totalitarian society, the intellectuals were attacked. We must exercise our freedoms, or the ideals of freedom of speech, religion, assembly, petition, and protest might be lost.

More reading from The Educator's Room’s authors on the impact of President Trump’s administration: 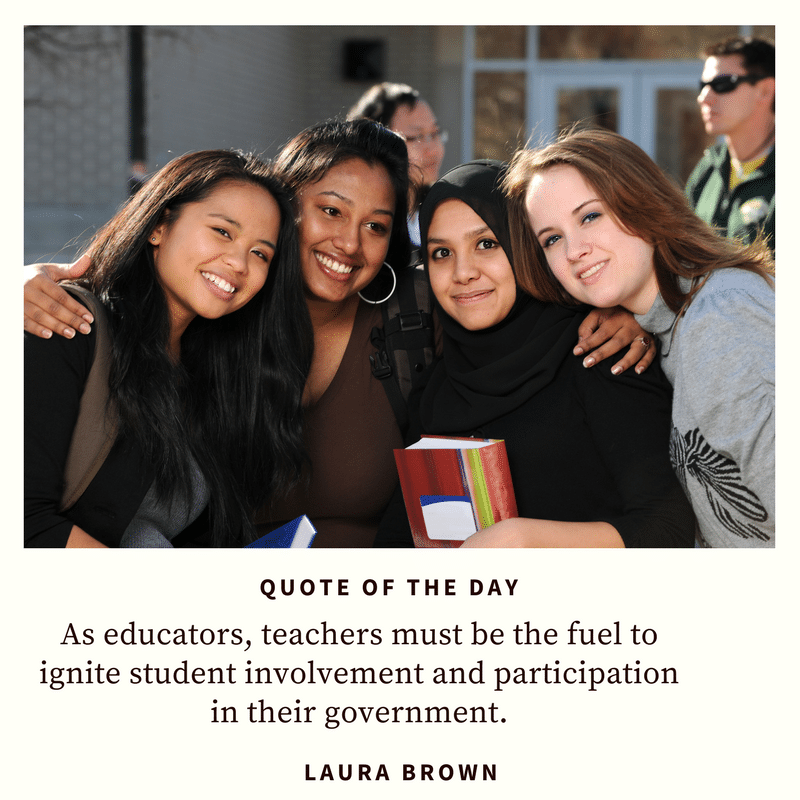 Civility in the Classroom and the Rise of American Fascism
« 2018...Helping Teachers Have the Best Year Ever
Despite the Teacher Shortage, Some Educators Need to be Coached out of the Profession »