The Best Persuasive Argument of 2015 was not presented in the form of the standard five paragraph essay.

Instead, the best persuasive argument made this year featured 1000 musicians playing the song “Learn to Fly" in a field in order to persuade the rock band Foo Fighters to play a concert in a small town in Italy.

The entire project was the brainchild of Fabio Zaffagnini and his creative team. They named themselves the Rockin'1000 with the tag line: Romanga Calling the Foo Fighters and they extended an invitation to the band perform in Cesena, Italy.

The diary on their website chronicles how they raised $45,000 in order to film their appeal.

Their effort began in May 2014 ("The idea pops out"), and the diary records their emotional responses as the team met each challenge:

Consider that a standard argumentative essay has five critical parts, and then consider how the argument made by the Rockin'1000 in creating their video meets each requirement:

PART #1  Introduce the topic of the paper and the thesis statement.

PART #2  Presents the facts of the case:

PART #3 Prove the thesis with your arguments.

"We got the money, so now we cannot back out, there are no more excuses."

"Italy is a country where dreams cannot easily come true, but it's a land of passion and creativity..."

"...the budget is extremely tight and we cannot afford many expenses, we borrow anything that is available, we implore technicians to work for free or to be under paid. We need experienced professionals, but the challenge is so cool that we are able to recruit real bigwigs."

The video: (Fabio speaking) "To be true...this (gestures to musicians) is just to 5 people They just did for one song...your song. Our call is to ask you, the Foo Fighters, to come and play for us...Please... (begging motion)....Make noise!....

The video can be seen here:

Moreover, the reason this is the BEST argumentative essay for 2015 is that David Grohl of the Foo Fighters did see the video, and he posted his own video response:

"Hello, Cesena. It's David," Grohl said, "Hi. I am sorry I don't speak Italian, just a bit, a bit. This video was good! Super nice. Thank you so much. We're coming, I swear. We'll see each other soon. Thank you so much. I love you. Ciao." (BBC News)

On November 4, 2015, the Foo Fighters performed in Cesena, Italy, for an audience of 3,000 donors and musicians from Rockin'1000. They opened with  “Learn to Fly,” and invited one of the drummers from the video onto the stage to perform. According to the New York Times review of the 11/4/15 show, Grohl told the audience, “The whole world saw what you did...Millions and millions of people saw what you did. It’s a beautiful thing.”

The 26 million views of this video on YouTube confirms the truth in Grohl's statement. There will be more views as this video appeal was included in many of the end of the year "best" moments for 2015 (Google). The standard 5 paragraph essay never reaches that kind of audience.

Consider, then, if this was the best argument for 2015, what can students do to persuade someone to take action in 2016...and what format would make the best persuasive argument? 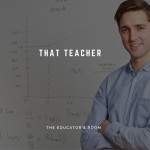 That Teacher..How A Teacher Is Remembered From STEM, Let's Pivot to the BRANCHES of the Humanities
« Dear Elementary Math Teacher: I Need You to Know.....
Winning Back Public Opinion, One Conversation at a Time »