I taught middle school math for 30 years. During my career I used many different types of math standards. These standards included school district standards, NCTM standards, a new set of district standards, textbook “programs,” and finally the Pennsylvania state standards. The PA standards very closely resemble the current Common Core standards with one exception. They were written by teachers from around the state and not by academics who had never taught middle school students. By sharing my experience I hope you can use the suggestions, activities and resources that helped me.

Most of you are still using Common Core Standards or a state version of math standards. Common Core and other math standards are not completely evil. I found much of the problem with them is that they were written by academics with little knowledge of what topics are age appropriate. To me the actual goal of common core is to have students understand how they solve problems using math.

There are several types of connections that you can use to make middle school math easier for your students.

I found that connecting with my students was one of the most important. Math is one of the most difficult subjects to teach to this age group. Middle school students change moods like the wind. They like to socialize. They also like to ask questions and challenge you. By the time they enter middle school they have already decided how they feel about math.

At the beginning of the year I would have students write a mathography. This a story of their experiences with math from first grade to the present. It helped me to see if there were any students who had experienced "math trauma" up to this point.

I would encourage students to ask questions when they didn’t understand a topic. I gave them the option of asking in class, after school or by leaving me a note with the question. If I thought the question needed full class discussion I would bring it up the next day.

Making personal connections with your students will also cut down a great deal on discipline problems. When they think you “get them” they are much less likely to challenge you.

When I introduced a new math standard I would connect it to the real world. Middle school students love to know how things work so if you can connect the math to something they are familiar with or interested in they will be more willing to listen. When teaching ratio and proportion I would connect it to making scale models or picture editing.

There are several math programs that use the technique of spiraling topics to enhance retention. Spiraling is nothing more than connecting previously taught topics with new ones. If I also use ratio and proportion as an example here this would be a good time to spiral back to include some practice on certain topics in fractions. This is a connection that will reinforce what has already been taught.

In the next part of this series on math standards I will be sharing ways to use math talk and group work to help students enjoy math class more. I will be sharing a group work model that I used for years that eliminated off topic conversations and non-workers in groups. Yes it really can be controlled!

Do you have any connections that you use with your math students that you want to share? If so, please share in the comments.

The Difference Between Calculation and Mathematics 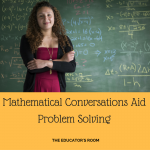