Last week a school board in Tennessee banned Maus, a Pulitzer prize-winning graphic novel about the Holocaust. In Florida, the Governor wants to ban learning experiences that cause “discomfort” to white participants. Across the country, Education Week reports, roughly ⅓ of students are enrolled in districts where “critical race theory” bans are in effect. Collectively, these bans on texts and concepts, combined with Republican-led efforts to suppress voting and control election outcomes, represent a disturbing drift towards fascism. For all of us who are concerned, history teaches us that classrooms must be the front lines of the fight against fascism.

Since 2015, I have been writing pieces for The Educator’s Room that demand “Teachers must…” this and “Teachers have to…” that. This piece feels different for two reasons. Firstly, I am not in the classroom this year. While I feel solidarity with all educators, I know that I basically have zero authority to tell anyone in the classroom what to do. It’s way too easy to tell teachers what to do when you’re not the one doing it. Secondly, the climate for teachers who speak up is the most dangerous it has been in decades. Teachers face fines or dismissal for attempting to address the history and present of systemic oppression in the United States.

With these caveats in mind, the urgency of this moment compels me to write this request. As the United States is getting closer and closer to outright fascism, classrooms represent crucial sites of resistance.

It’s important during this dark time to remember that banning books and threatening teachers isn’t new. Former high school history teacher, Ursula Wolfe-Rocca, compiled an excellent critical review of McCarthyism for the Zinn Education Project. She reminds us of the long history of targeting anti-racist, queer, leftist, and anti-war organizers and educators.

Furthermore, under Jim Crow, Black people living in the South essentially lived under authoritarian rule. They could not vote, attend properly resourced schools, or exercise other basic human rights. They faced consistent violence at the hands of the state as well as extrajudicial mobs such as the KKK.

When I read about the current anti-Critical Race Theory push in schools, I also think of educators more recently who risked their jobs in order to promote conversations about equity.

As we consider our strategies to push back against rising fascism today, we would do well to remember its historical roots in this country. In doing so, we can also find examples of educators who resisted.

What is New About This Moment?

While silencing critical thought in American schools is not new, certain aspects of this moment feel uniquely dangerous.

One is the consensus we lack about previously shared ideas and values. Climate change and vaccines are two of the most salient examples, but generally, it feels like there’s less and less we agree on in the United States. We are living in increasingly isolated silos. Covid’s disruption to travel and socializing has only exacerbated this. We tend to consume news and social media that confirm our biases. We’re also more likely than ever to live in politically homogenous communities. This makes it unlikely that we can collectively take action on anything, including the dismantling of our democracy.

The second challenge of this moment is that our political institutions are both paralyzed and fragile. The Senate, Electoral College, and Supreme Court have arguably been anti-democratic from their inception. Nonetheless, there have been moments in the United States when Congress and the Supreme Court took action in defense of freedom and equity. It feels naive to expect something similar to happen now.

Across the country, Republican-controlled states are passing laws that are limiting access to voting, gerrymandering districts, and changing the way votes are counted and certified. Without federal intervention, we will enter into a dismal new period in the United States. The same folks who want to ban books and anti-racist teaching will control our government at every level.

What Can Educators Do?

To fight fascism from your classroom, you can’t do it alone. In her dedication of We Do This 'Til We Free Us, Mariame Kaba shares wisdom from her father, "Everything worthwhile is done with others." Practically every significant social change in history was accomplished through collective action. Joining a community means access to resources, wisdom, and support. And if something goes wrong, you won’t be alone.

As you fight fascism in your classroom, remember to do what you do best. When people disagree with your politics, they will try to attack your skill and expertise. Don’t let them. Come to your class prepared. Make space for student-led discussion and inquiry, but ground your teaching in facts. The Morningside Center offers ten guidelines for teaching about controversial topics.

Look for resources from your district that also support the topics and practices you are using. I once had a principal try to stop me from reading LGBTQ stories in my classroom. I was able to point to my district’s policy on anti-bias and inclusion. While not all districts have similar progressive guidelines, federal laws Title IX can also back you up.

Ultimately, do what you can. Depending on your race, gender, sexuality, class, immigration status, or other identities you may be able to risk more or less than others. I am not in the classroom this year, and when I was I did not have others relying on me financially. That said, with serious anti-democratic changes underway in our country, students need the tools to understand what is happening.

Our job as educators has always been to help students make sense of the world. That way they make a difference in it. Students need to learn about the history and presence of racism in the United States. They also need an understanding of the Constitution, as well as fights over democracy that have taken place in the United States. Classrooms must be places where students learn this context. Only then can they comprehend and fight back against the rising threat of fascism.

For Students Who Can't Read, Computers Won't Help Them- But Teachers Can 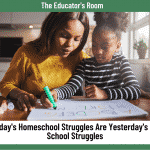 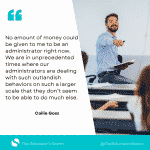 Why I Microwaved My Strawberries: An Analogy for this Entire School Year
« Filling Your Cup with Science
Research Paper Alternatives That Will Still Increase Research Skills »