I have taught through a lot of shootings and other horrible events, both local and national. The first major shooting I remember helping my students through was Sandy Hook, though other incidents had put us on lockdown previously. The fear was palpable. They wanted reassurance for days afterwards. They had the same fear after the Boston Bombings and a few subsequent shootings and hate crimes, regardless of proximity.

After a while, though, they stopped asking questions. They stopped reacting at all. After the horrors at Marjorie Stoneman Douglas in Florida, we talked a little, but they were largely resigned to their fate. When the next one happened, I was teaching a lesson with the screen projected, and the news popped up over the screen. The kids asked where it was, and when I told them, they said “okay” and went back to work.

When the shooting happened at the synagogue in Pennsylvania, not a single word was said to me by any of my students.

My kids are some of the kindest, most empathetic people I have ever had the privilege of knowing. So, why are they so unmoved by events like these now? The answer is simple: it’s not shocking anymore. It’s not news. It’s their normal. They have never known a time when this wasn’t normal.

My kids are some of the kindest, most empathetic people I have ever had the privilege of knowing. Click To Tweet

Let me compare it to something that has, sadly, happened to most of us: the loss of a loved one. At first, it’s a shock. You feel like bursting into tears each time you hear their name or you see or smell something that reminds you. The wonder if this will last forever, this reaction each time they come up.

It doesn’t.  As time passes, you stop having a reaction when their name is mentioned. You can talk about them without becoming emotional. It doesn’t mean you’re happy that they’re gone; it’s just that their absence, even with the constant reminders, is your normal. Your emotions have adjusted.

My kids? Hearing of people dying in huge numbers is their normal. People being killed because of their race, religion, immigration status…all normal. Children dying in their schools? Normal. Normal. They don’t react to it anymore because it’s a wound that has scarred over so much that it does no more than itch on occasion.

We did this. We, adults, allowed this to become normal. We have created a generation who thinks this is just how the world is and no longer has questions or concerns. Some even assume it’s only a matter of time for them or someone they know, so why worry about the inevitable?

What will happen when they become adults and have already decided the battle is lost?

We, the current grown-ups, need to fix this. Yesterday. There are many other countries where this rarely to never happens, which we could use as examples of how to solve the problem. And we also need to make sure our kids still feel empathy. We need to open the conversation, even if we don’t want to. We need to explain to them that there was a time where this wasn’t normal, and just because it is common, it doesn’t mean we should be complacent.

My students don’t deserve to live in a world where they are just expecting they will eventually get shot at school, at worship, in a mall, or at a concert. My students shouldn’t consider their skin colors or their accents targets on their backs. The time for thoughts and prayers has passed. We need to stop saying there is no way to fix this when we are the only country where this regularly happens.

We need to actually fix this before these young people become adults who know no other world.

Wait for it... Esther Earle's Star 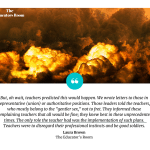 Teachers: The Way Home Is Through Baghdad 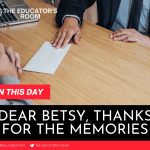 Dear Betsy, Thanks for the Memories 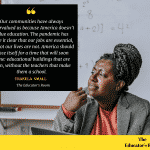 Teachers Gave All They Had And That Wasn't Enough
« Stuck Like Glue: What Curriculum Adherence Can Do for Your Classroom
Teachers Must Not Only Be Non-Racist, But Anti-Racist »