I heard you resigned today because of all the bad things the president said at his insurrection party. You just finally had enough, huh?

Hey don’t worry, I agree with you. It wasn’t pretty. My students think so too.

In fact, we didn’t like Trump’s rhetoric either. I guess we just noticed a tad earlier than you did.  About four years earlier to be precise.

And don’t worry, we teachers also got your message a while back that we were supposed to fight against those who would subvert your amazing work on behalf of all children.

We have to carry on your legacy, so to speak, right? There’s only one problem with that. Please don’t take any offense, but the more I think about it, the more your work seemed a lot like Trump’s rhetoric! Did you ever notice?  I mean he sure seemed to like your work a lot. You kept standing next to him, smiling next to him when he gave all those poignant speeches that one of my nine-year-old students once called, “Stupid.”

But don’t worry, you’ve had some great ideas. None of which a nine-year-old would call stupid I am sure.

I mean, when you said that potential grizzlies could be attacking our schools, I am sure you were just letting the NRA know that teacher’s packing weapons on campus was a good idea. It’s not like you thought a bear was going to attack old Mr. Courtney now! Am I right?!

Or hey! How about that time you said that America’s black colleges were pioneers in school choice? You weren’t being stupid. You just wanted to make history feel happier for black folks.

Like how you deny there is even a climate problem in the first place. No need to alarm anyone! While I’m trying to teach real science about our changing planet, you made sure to show your support for the president leaving the Paris Climate Agreement. Remember that?

So many memories! How you tried to defund the Special Olympics and oh hey, remember when you wanted to complicate the process for sexual assault victims?

Personally, I always thought a billionaire’s vitriol over student loans was a bit more ironic than rhetorical.

What do you think?

Oh, I’m sorry. I keep forgetting you’ve got to go.

Listen, I’ll let you pack up. I don’t want to keep you.

I know you’ve got some charter schools in Detroit that need your attention. The ones that haven’t fared as well as the public schools you helped close.

And that new yacht won’t captain itself now will it?

Take care, Betsy. And watch out for potential polar bears out there while on one of your yachts. I heard some alternative facts that they don’t have as many icebergs to hang out on. 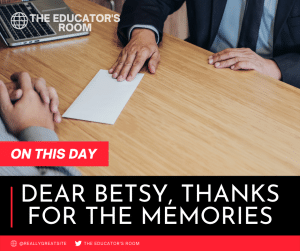 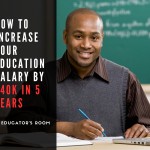 How To Increase Your Education Salary by $40K in 5 Years

Civility in the Classroom and the Rise of American Fascism
« How Covid-19 Has Changed Public Education Forever, But Not Everyone Has Gotten the Memo
Opinion: After Trump, Civics Can NEVER Be the Same  »