Emma-Kate Schaake is in her sixth year of teaching high school English in Washington. She is passionate about educational equity in curriculum design, classroom practices, teacher leadership, and student voice. She's the advisor for her school's social equity club and a district leader in equity professional development. She writes about her ongoing journey to unlearn myopic history, self reflect, and think critically about her role as an educator. She can be found on Instagram @msschaake

In a recent staff equity meeting, the concept of staff responsibility in gender pronouns came up. It seemed that everyone there had at least one student who used pronouns that didn’t necessarily align with the sex they were assigned at birth. And, they all fully supported the importance of honoring student’s pronouns

For those who don’t agree with this very basic honoring of humanity, we need to have a completely different conversation. Though I have yet to hear these voices at an optional after-school meeting about educational equity, go figure. Click To Tweet

But, while we may have all been comfortable with that practice, the idea of employees adding their pronouns to their profile and email names quickly turned the conversation towards “comfort.”

And, therein lies the crux of the discomfort that was surfacing. She was right. My use of pronouns as a hetero, cis, female educator isn’t necessarily about my pronouns and identity. But, instead, it’s about showing true solidarity and recognizing others’ for who they are.

Although it would be nice and certainly easier to think “we have come a long way” in gender and transgender equity, the reality is, we as a society, and as a school system, have a long way to go.
GLSEN’s (The Gay Lesbian and Straight Education Network) research finds that transgender students face more hostile school climates than their cis peers, which is “profoundly harmful” and can lead to increased risks of violence, mental health issues, and suicide.

In one specific arena, sports, the ACLU reports that at least 24 states have bills to ban transgender athletes from playing school sports.

And, we see this persistent intolerance in our buildings. Last year, some students tore down rainbow printed flyers from the GSA (Gender Sexuality Alliance) billboard. Luckily, only deeply disheartening instead of dangerous for our LGBTQ+ students.

I wish I could say I haven’t had to intervene when a student used a homophobic slur, but I have, more than once.

Working toward progress, in one of his first executive orders, Biden passed the Executive Order on Preventing and Combating Discrimination on the Basis of Gender Identity or Sexual Orientation. Then, he followed up by reversing the trans military ban enacted by the Trump administration.

I teared up at that news, thinking of one of my former students who wanted to serve his country, but would have been unable to based on his gender identity.

He has had to live with the fact that his very body is seen as political, legislated by the whims of the presidency and the subjective laws of our land.

This year, I have three gender non-binary and transgender students. I’ll admit that I haven’t always said their pronouns correctly, especially for those who have announced their true gender identity mid-year.

But, I recognize the importance of correcting myself. I want my students to know that I'm imperfect but committed to doing my best for them. If I ever mess up, I make sure to instantly apologize and correct my mistake.

They usually respond with something along the lines of, “Thank you and it’s okay. It just shows me you care.”

The way I see it, announcing my pronouns is also an act of care, of recognition. I’m acknowledging that, even though I happen to fall within the socially constructed gender binary (female), I understand that gender is a spectrum. Even though I can’t understand their exact experience, I will extend empathy and do what I can to support them. I’m here.

When it comes to doing something to check a box and profess equity, most adults tend to be on board. But, when it comes to actually changing a culture, people seem more hesitant to involve themselves. A hands-off approach to issues that really need all hands, and hearts, on deck.

This happens in all professions, though in education we have the added, crucial tasks of protecting our young people.

Recently, a friend told me that her non-binary colleague has faced pushback from others who don’t see the point of adding email pronouns. They told them “it’s just a fad” or they “need to see more research.”

My friend then went to the head of her agency, who has professed to be committed to equity, to consider adding his pronouns to his email signature. While he was receptive to the idea, it has been six months and he hasn’t made the change.

One thing is absolutely clear. No one’s gender identity or pronouns are a fad. And what more research do we need to persuade us to stand (type?) in solidarity? The lived reality of the people in our lives should always be enough.

If having my pronouns at the end of my email can make a student, parent, colleague, or community member feel seen and valued, then does it really matter if I’m uncomfortable?

I’ll err on the side of empathy and encourage others to do the same. 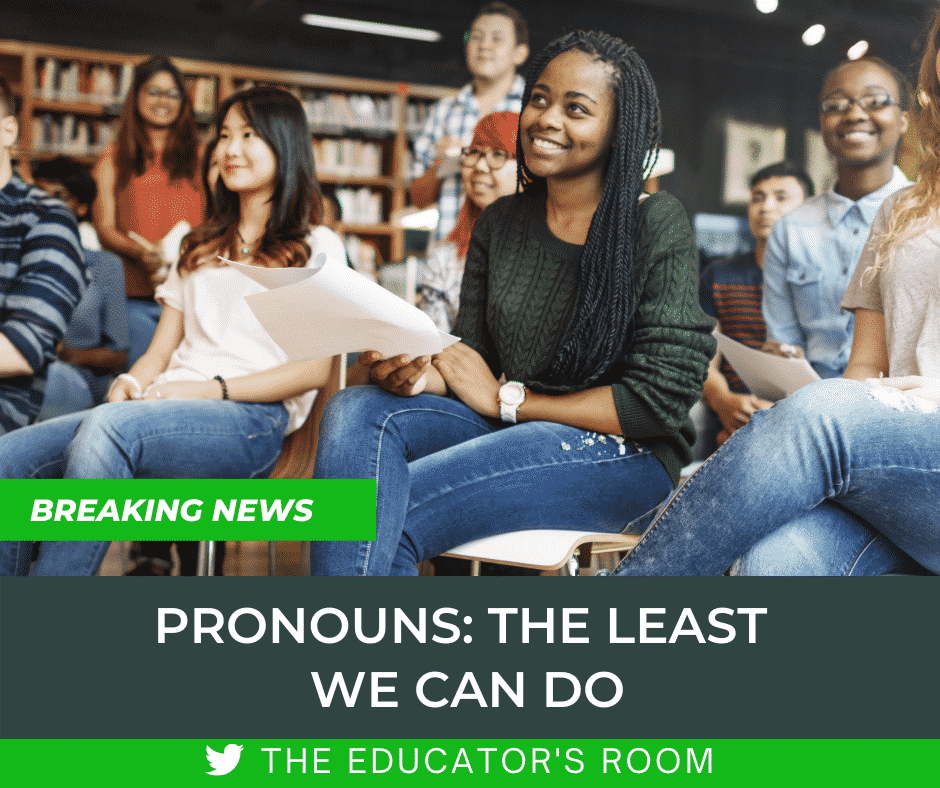 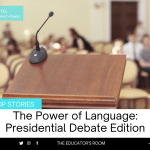 Don’t Read the Comments: Digital Teacher Self Care
« Teachers Don't Get To Turn Off School
When Teaching Middle Schoolers: The Most Asked Question is, "Are You Insane?" »