In a rural area, the suppression and exclusion of the hardest working and neediest among us can readily be seen in almost any school that serves struggling populations. It probably looks different and it comes at you different, and it even feels different than it might in another area.  I grew up in the region I teach in, and can give you a first-hand account of how the past few decades have advanced from how it looks as a child to how it looks as a worker (and the industries that have disappeared) to how it looks as a teacher. I have witnessed all three. From the local villages on the outskirts of the only thing that could be called a “city” around here, right in that city, to way out on the hilltop I’m sitting on now.

This area  is cow country. If you didn't know it, during the right times of the year your nose would tell you. Waaay across the valley on a far hillside I can even see route 81. On my best day, I might be able to hit my neighbor’s house with a baseball but there’s a 20-yard strip of trees between us and her so I have no chance. Plus she seems a decent sort and she treats my dog well when he sneaks over to visit, so I wouldn’t try.

She does have a Trump sign on her lawn, though. But that’s another matter, and when you live way out in the country on a road almost no one travels the only sensibilities offended are those of a few neighbors. What sensibilities offended would that really? Maybe me wandering down to get the mail with no pants on. Call me a local legend, if “local” means the one car that drove by and the two police that showed up an hour later.

You see, in a rural area, most things are kind of slow, calm, and personal in a way that you can see and feel. Even though our nation’s economy was dealt a crippling blow not too many years ago,the economic decline leading up to it could be seen and felt that way in my area long before that. It was a slow stroll to a coming-to-call for the chronic, destructive foreign trade policies, trickle down reverence, and the gathering of speculative wealth. It pulled income and equity upward and away from the middle and lower classes, and that there was a “crash” wasn’t really a surprise. The real surprise came when President Obama’s call for “shared sacrifice” was traded for “education reform”, along with attacks on public workers, unions, and on the job protections and benefits earned and paid for by hard workers in the public sector. Workers that lost equity in their homes, security in their jobs, had to then listen to media attacks on them, through media funded and shaped by those who refused to share in the sacrifice.

By the time I was twenty-one, I had lived and worked through the reductions in and closing of a few large local factory employers. Families in my county had been started, sustained and raised on Smith Corona Manufacturing pay, for example, and employers like SCM paid well- sometimes even did profit-sharing bonuses with employees. As this place and others slowly declined and disappeared, or just flat-out shut down, the county also experienced the disappearance of many local family-owned businesses. The loss of vibrancy in the local economy that was demonstrated in the decline of home purchases, the fewer full parking lots at the local bowling alleys on league nights. It seemed like a lot of that was just gone and storefronts and neighborhoods began to look empty. When I was a young man, I didn’t know of any such thing as a “Wal-Mart”, let alone a SUPER Wal-Mart.

Today, as a public school teacher living in the same area I grew up in, and teaching in a rural district in the region where I have lived my  entire life, I have seen first-hand what economic disparity does to our economy, communities, families, and schools. When jobs go away, economic and social stability go away; family bonds are disrupted and sometimes dissolved, and in the absence of these nurturing forces-other less desirable influences move in to fill the voids. I’m not saying that a Wal-Mart is an evil thing inherently, but you have to think about why those things come to exist, and what other things are brought into existence along with them.

So “shared sacrifice” rings a little hollow when I have both lived (then) the destruction of a trickle-down approach to our nation’s economy, have spent near 15 years teaching children who live it today, and now have to suffer "reform" at the hands of those who refuse to reform themselves.

As I wrap up entry one, I want to say that when you thought you had voted for “hope and change”, and then feel you’re just getting “more of the same”, you can wrap it in a smile,  and in a casual manner throw it down with some smooth Al Green-. Despite the packaging, the disconnected bullshit still smells bad and tastes even worse. The real “change” we’re getting can be seen in the classroom where the children end up being the canvas that stinky stuff gets painted on. People around here used to get busted for growing pot once in a while now they’re cooking meth. Trying to make ends meet has turned into your heart breaking as you look at children and wonder if those ends can meet or if there are even “ends” at all. Living and working in a rural area, it could mean that it’s your neighbor you’re looking at. Or the child who lives in that leaning over falling apart structure you didn’t think anyone lived in. It could even be a relative. It sometimes means knowing more than you ever wanted to know, having it break your heart, but still being glad you know because then, maybe, you can help.

Stay tuned for my next entry-  a look from inside the school. 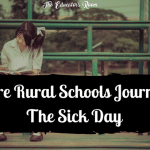 Teach to the Rest: How the Pandemic Could Be the Best Thing for Education in 20 Years