A high school science teacher, Sarah Sorge has taught in private, charter, and public schools in grades 7-12. Her areas of interest include neuroscience, education, and problem-based science instruction. Recently, Sarah was awarded the distinction of New York State Master Teacher.

In the morning hours of April 22, 2017—Earth Day—scientists, teachers, students, concerned citizens, and activists gathered in Washington D.C. to show their support for a single subject: science. There were no shouts for NGSS, no calls against Common Core, no jeering at climate change. Instead, all who gathered for the March for Science were attempting to have current political leaders (most notably the Trump administration) understand that science is important and that research matters. Sister rallies bloomed in cities across the globe, calling in unison for leaders to follow evidence-based practices as they create legislation that will affect generations worldwide. The March for Science was a worldwide phenomenon, spawned from a “diverse, nonpartisan group” calling “for science that upholds the common good, and for political leaders and policymakers to enact evidence-based policies in the public interest.”

At the National Mall in Washington D.C., 40,000 people listened to speakers applaud the advances of science and researchers, indicating that the evidence-based knowledge we have gained thus far is responsible for driving us forward in innovation and conservation as societies change and become more industrialized. In other major cities, the numbers were also strong: 40,000 in Chicago; 20,000 in New York City; Philadelphia and London had 10,000 each; more than 600 marches occurred worldwide timed such that they would all occur on Earth Day. Famous television personality and scientist, Bill Nye, stated, “I did imagine it could come to this.” By this, he was referring to the crowds of scientists, doctors, engineers, educators, and concerned citizens converging en masse to protest the clear and present danger to scientific research and advancement. With the current national push toward STEM/STEAM initiatives in our schools, scientific literacy naturally becomes part of the conversation, as students are encouraged to think critically about the information presented to them and to provide evidence to support those claims. However, there has been a startling increase in anti-science rhetoric: climate change deniers, the anti-vaccine movement, and crippling budget cuts.

However, Nye contends, “When you become scientifically literate, I claim, you become an environmentalist … Somewhere along the way, there has developed this idea that if you believe something hard enough, it’s as true as things discovered through the process of science. And I will say that’s objectively wrong.”

It seems, by and large, that many elected officials have been taking the stance of being anti-science, most notably President Donald Trump. As he unveiled his budget proposal for 2017, there were drastic increases for national security and dramatic decreases for science research, most notably the United States Environmental Protection Agency, which is on the receiving end of a 31.4% cut in funding, while other agencies such as the National Institutes of Health received almost 20% of their funds eliminated. Program such as Advanced Research Projects Agency-Energy, the Chemical Safety Board, Global Climate Change Initiative, and NASA's Office of Education are all slated to be eliminated completely. Moreover, President Trump has made it very clear that he finds many conspiracy-theory ideas to be more reliable than what worldwide scientific consensus has shown to be correct. Some of his opinions include, but are not limited to:

This dangerous viewpoint is further emphasized by President Trump’s actions that seem blatantly hostile to the scientific community. If these actions to date do not seem to provide sufficient evidence, then perhaps the following facts may prove useful.

As a scientist and as a teacher, my greatest concern is for the future of my students and our planet. My classroom runs on the idea of being eco-friendly and to be responsible environmental citizens. My students are actively asked, “why?” and are required to back up their opinions with facts, and I encourage reasonable debates. Evidence-based practices are the bedrock of science and should be the foundation of a functional society. In a world rife with “alternative facts,” the ability to discern fact from fiction has become even more imperative than ever.

Famed astrophysicist and director of the Hayden Planetarium in New York’s Museum of Natural History, Neil deGrasse Tyson, has actively called out the Trump administration’s overall rejection of science, stating, “People have lost the ability to judge what is true and what is not, what is reliable, what is not reliable … That’s not the country I remember growing up in. I don’t remember any other time where people were standing in denial of what science was… When you have people who don’t know much about science and stand in denial of science and rise to power, that is a recipe for the dismantling of our informed democracy.” Science has always been a political issue, but it should never become a partisan one. Unfortunately, this is no longer the case, and science is under fire in a way that seems to be unprecedented.

Born out of the Women’s March in January 2017, the March for Science is a call to action that cannot last simply for one day. As teachers, we have the incredible responsibility to shape our students into contentious citizens that are able to critically analyze the information presented to them. When world leaders—especially in the United States, Russia, China, and Australia—are presenting ideas that are in direct contrast with a preponderance of scientific evidence, we must teach our students to trust evidence rather than anecdotal ideas, to question rather than acquiesce. Science teachers must especially press this evidence-based practice more than ever, and this is an imperative that runs far deeper than standards presented by NGSS.

Although we have to be very careful in terms of politics in our classrooms, we can encourage our students to think like scientists: be skeptical, ask questions, research, and repeat the process. We can help our students tackle the hot-button topics they hear about in the news: vaccines, GMOs, renewable energy, climate change, conservation, and other items commonly seen in the headlines. We can help them discern where to find factual information and how to weed out the biased or sensationalist information they might encounter. Our responsibility, as teachers, is to be role models of critical thinking and active consumers of evidence-based practices and facts. Just as we serve our youngest citizens, we have to hold our elected officials accountable for serving all of our best interests. 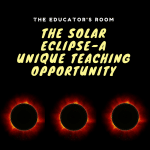 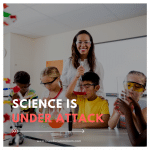 Science is Under Attack
« The Struggles of Grading Writing: It's the Process That Matters
Teacher Appreciation Week »