I absolutely hate assigning a letter grade to student writing; it's depressing.

Not because my students are bad writers because they aren't. It's that I hate to see all the mini-lessons, and drafting, revising, editing, conversations, and growing as writers reduced to one letter. A percentage in the grade book. As soon as that grade is posted, students see it and they forget the entire experience and judge themselves on that one score. It's depressing for everyone.

Some teachers believe kids won't write unless they receive points.
I believe the opposite: grading often harms the development of writers.

For the past fourteen years, I have brought over a hundred essays home a minimum of four times a year, and I always say the same thing to my husband: The worst part of being an English teacher is putting a grade on someone's writing. A grade doesn't show what that student went through with that piece. It doesn't show the growth that was made (or the lack of growth). One kid's C might have come from a place of hard work and revision where another kid's B could have been a good rough draft with minimal editing down the night before. That C doesn't show the countless discussions and comments and time spent in--and out of--class. That B doesn't show the absences or goofing off and lack of effort. That B might be someone who should be in advanced English, and the C might be someone who just learned English last year.

Tracking progress and ability to meet standards is constructive to students and teachers as well as parents and administrators. Assigning an overall "label" to someone is dispiriting for both me and my students. It feels horrible to work with students on a piece of writing for two weeks and rather than hand them a sheet of their progress on their standards, I give them a letter grade--which for some can be devastating because they worked incredibly hard, but it's just a D or C paper. There is so much stigma with a grade that is not an A. Students associate an A with compliance to do what is required and to just "work hard" or "show up." However, an A is supposed to mean excellence, which in reality, only a few students ever achieve. A's have become meaningless as indicators of what students have produced and instead are treated as trophies. When kids don't get them, they don't really understand why if they checked all the boxes on a list of requirements.

It is also baffling that students (and often their parents) expect to start the year with A's and maintain them without any dip. As a friend and colleague pointed out, a dip in grade means learning is occurring because there is not mastery yet. The idea of grades and GPAs do not account for student growth at all. It should be expected that students who come into my eighth grade ELA class should be at beginning eighth-grade level (high seventh-grade level) if they mastered all the standards the year before.

Students (and often their parents) expect to start the year with A's and maintain them without any dip. Click To Tweet

The reality is most will not be "at grade level." In fact, many of my students are more than two grades behind where they should be for both reading and writing, but even if they are at "grade-level," they are only beginning the new grade-level. Our current system of grading is set up to benefit students  of higher socioeconomic status who have access to early childhood education, support at home for homework and reading, are native English speakers, have at least one parent who is educated and can advocate for them, and who have their basic needs met. It's unjust, and quite frankly discriminatory, to the kids who do not come to school with the same advantages as others.

Writing is different for everyone.

To center this back to grading writing, let me give you a snapshot from my own classroom in an urban, Title 1 junior high school. Our school serves grades 7-9 and over 80% are on free/reduced lunch. Twenty-one percent are English Language Learners (ELL). Our last large writing assignment was an argumentative essay. We worked for weeks on choosing a topic that matters to us as writers, thinking about the audience, developing catchy introductions, conducting research from reliable sources, quoting and paraphrasing those sources into examples to support our reasons, articulating and rebutting possible opposing views, and considering possible solutions and calls to action.

Over the weeks we worked, the students and I looked at a standards checklist of all of the above things that also included language standards (such as word choice and mechanics). We talked about where they were in terms of mastering the standards. They revised and edited accordingly.

I had some students starting on the high end of the standard spectrum. They had a strong understanding of choosing a stance and supporting it. Others were quite low; they had a hard time being firm and were unorganized and repetitive in their reasoning. Some students had lots of support at home and worked from a computer at home so they could get extra revision help in class. Some had absolutely no access to technology and the only time they had to work was in class. Some took every second afforded them. Some wasted every second. Regardless of effort (or lack thereof) and growth, at the end of the quarter, I had to assign a single grade to each essay based on a rubric.

It's not that I don't think the C papers were C papers; it's that the student (and their parents) will only see the C. They will think all the hard work and growth and conferencing and revising and editing were for "nothing."

That singular grade does not tell the story of the road traveled to get to that final product. As writers well know, it's the process of writing that is where we learn and grow, not the product. For some, that road is filled with potholes, detours, and construction. The road to a finished paper means coming in after school for the tutoring session in order to have access to a computer and a teacher to help with word choice because what you're thinking may not translate exactly into English. That road might include requesting to come in at lunch because you can't stay after school because as an 8th grader, you are the oldest kid at home and need to be there when your younger siblings get off the bus.

It's the process of writing that is where we learn and grow, not the product Click To Tweet

For other kids that road to the finished paper is smooth and easy and quickly traveled because your mom takes you to the library for extra research, reads over your draft, and gives you input. In fact, I use class time to challenge those students to think of a second opposing view to refute or work on a more complex solution to their issue.

And for still others, the road looks boring, so they just sit at the start putting new presets into their radio because the journey seems like too much work.

The journey is where the growth and learning happen. However, the current system is not learning/growth oriented at ALL. However when I try to put all the emphasis on the process, students are confused and upset when the "product" is not an A.  They did what they were supposed to and they expect a grade for that. They don't understand that the process and the product are two different things. But our system only gives credit for the product.

What is the point of having standards if rather than working with those standards and reporting on the process to master those standards, kids are giving a letter grade that only shows compliance and that they checked boxes on a rubric? That they handed in a product.

In my perfect world, I would still do "grades" like they do in elementary where a kid gets a 3 if they are proficient, a 2 if they are skilled, a 1 if they are still developing, and a 0 if they have not met the standard in anyway. Letter grades show more compliance than ability and I struggle with them, especially for writing.

Letter grades show more compliance than ability and I struggle with them, especially for writing. Click To Tweet

For next year, I am working through an idea of creating Standard Sheets for each and every one of my 120+ students, and tracking their progress from quarter to quarter alongside having to do letter grades. I want my students to see the road they have taken in 8th grade ELA. I want them to see the easy parts and the hard parts. I want them to reflect and set goals.

I want to prove the journey matters. Remembering to Find the Good: Meaningful Feedback for Students 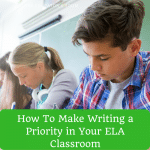 How To Make Writing a Priority in Your ELA Classroom
« Family Planning as a Teacher
Science Under Fire: A Day After the March for Science »