Claudia Melendez Salinas recently wrote an article for the Monterrey Herald (CA) about Secretary of Ed. Arne Duncan's push for a nationwide Pre-K system. President Obama also reaffirmed (and doubled-down) on his support for universal Pre-K funding by speaking about the system once again, including full-day Kindergarten in his plan.

Educational Impact: As Ms. Salinas pointed out in the article, the idea is a strong one but lacks a fiscal plan. As states across the nation struggle to make ends meet with their current educational expenses (see our State of Education section to learn the struggles of each state), closing schools and laying off upwards of 20,000 teachers just in my state, another unfunded mandate from the federal government is the last thing the states need. The necessity of Pre-K is certainly there, but not necessarily the funding. We're hoping to see both implemented by and from the national level, but not at the sacrifice of current educational programs. 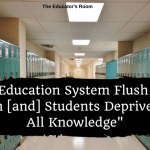