There was a time when standing up for public school teachers in the United States was not merely acceptable behavior, it was actually the cultural norm. We gave our teachers accolades in the public arena, hoping that our efforts at demonstrating our united esteem might somehow make up for the low pay we afforded them. Those days are long gone now. Speaking up on behalf of teachers almost automatically provokes a response from an assortment of folks who would prefer that we keep the focus of our national education conversation on failing schools and rubber room teachers. They have their reasons, those in the chorus screaming "Demonize them!" There are education entrepreneurs who are engaged in deadly-serious business competition against public schools. They want--need is a better word--public schools to sit in ill repute so that the school chains in which they hold a financial stake may expand. There are the voucher folks who need the public school teachers to be bad enough to justify bundles of public monies (preferably with no strings attached) being thrown over the ivied walls of private schools. Some home school advocates cheer any bad press concerning public schools. I'm not sure why, but it may have to do with public schools being constitutionally disallowed from favoring the home team's God. There are the union-busters who really don't like teachers' unions and want them to go away. The "bad teachers can't be fired" line is a vital armament in their ideological arsenal. There are those who resent the fact that the worst-performing schools in America are reserved for minority populations who have been historically denied equal opportunity in every aspect of American life. They blame teachers perhaps because the politicians disavow responsibility. Or maybe just because they have seen more than their share of bad teachers. Over and again, the harried American teacher is collateral damage in a wider ideological war. I've known lots of teachers. Some were bad, some were okay, some were solid. And some were absolutely lights-out American-hero-on-a-daily-basis phenomenal. We don't do enough to protect the good ones in the popular onslaught. We don't usher them to safety before we carpet bomb our public schools with unhinged vitriol. Someone gave the green light to beat the candy out of bad teachers like so many pinatas, and now a bunch of idiots in blindfolds are swinging away at our education system's fine china too, for good measure. The great thing about preaching the "bad teachers" gospel is that you can base an entire public speaking career on a handful of bad teacher anecdotes. Even if the percentage of bad teachers is lower than the percentage of doctors who hack off the wrong limbs in surgery, there will still be lots of bad teachers about whom tenacious slanderers may tell stories--ideally stories in which they magnify every gory detail.

A sense of fairness and propriety would seem to prevent this type of one-sided treatment, and it typically does among people who actually identify with teachers as human beings: namely, their peers in the middle class.But among their betters in the wealthier classes, teachers are supposed to be ridiculed and pitied. The greatest flaw, perhaps, of today's public school teacher is the fact that he or she is so irreparably middle class. It's tacky, really, how they drive their Korean automobiles and live in their little brick homes and watch their sitcoms. They vacation to Six Flags, for crying out loud.The most vociferous of today's teacher critics--and also many of the men and women who currently design and enforce the policies that steamroll teachers and dismiss their concerns like so many pesky gnats--are snobs, for lack of a gentler term. Teaching is a middle class profession, sneered at by the one-percent and those who wish they were. Today's climate of teacher-bashing was ushered in and enthusiastically promoted by folks who attended elite private schools and never sullied themselves amongst the commoners. Like so many young Buddhas, they were protected from the existential realities of the masses from earliest childhood. Unlike Buddha, however, they never sought (or received) enlightenment.And so they tee off on teachers like their daddies tee off at the country club.America's problems with poor children, they are certain, would be solved if we would merely let the upper crust show us the way forward. And so they form organizations like Students First and Teach for America, and they lead school systems in Tennessee and Louisiana. They have little patience for the hapless and pitiable state college graduates who so very pathetically make up our nation's teaching corps.And education reform becomes the vehicle by which the upper class blames lower class suffering on the middle class.Poverty is bad, and they believe that; but it isn't caused by ultra wealthy Americans pulling the strings of power in their favor or guaranteeing a greater share of the good stuff for their children. Poverty is certainly not caused by greed or the complex and brutal politics of power and influence. Poverty is, in the new formulation, the gift of bad teachers to this nation. Public policy needn't be looked at too closely; it's the teachers who must be sifted like flour.Luckily, with billionaires suddenly having taken a violently passionate interest in educational philanthropy and Ivy League grads lining up to teach for awhile in our city schools, we as a nation may be nearing a tipping point in which the keen interest of our wealthiest (if not brightest) minds will make things better for the poorest American students by canning a bunch of middle class losers. (While, in a felicitous win-win, preserving historically low tax rates for the rich.) As a proud lifelong member of the American middle class, I will have to ask the snobs who hate teachers to please overlook my inexcusable sympathies. I don't know any better--I went to a state university. 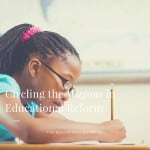 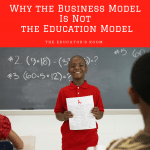 Taking Charge of Our Own Profession - Part 1: We're Selling Ourselves Short!
« Inclusion, Not Always the Answer
{Ask a Teacher} Help! I'm Overwhelmed! »