"Never doubt that a small group of thoughtful, committed citizens can change the world. Indeed, it is the only thing that ever has."

This quote from women's rights advocate and cultural anthropologist Margaret Mead - could also be Sesame Street's mission statement. Since its premiere on November 10, 1969, Sesame Street has brought the fundamentals of learning to all homes with a television set, and helped broker academic increases in many of its viewers, with its largest gains felt by low income children. Indeed, the show's creators finally were able to push forth real improvements in learning for the group many stakeholders still fight over today. Now Sesame Street is seeking to negotiate another misunderstood population of students: those with autism.

So what's the big deal with autism? According to The Autism Society's website (and cross-referenced by multiple sources), the following is true about autism:

Now, more than ever, it's important for us to understand how autistic children operate, which includes so many similarities but some notable differences.

60 Minutes's Leslie Stahl recently interviewed the creators of Julia, the 4-year-old Muppet girl who is on the spectrum. One of the writers said that they "struggled with how to portray" their newest character, but noted one incredibly important altruism of students with autism:

Now, more than ever, it's important for us to understand how autistic children operate Click To Tweet

Julia is certainly constructed uniquely, as are all our autistic students. Viewers are taken behind the scenes to the Muppet creation center. Here we see she's equipped with two different sets of arms, one the standard fare for any character, while the other pair are used to flap her arms when she's upset.

The show's creators certainly have made Julia's inclusion a significant lesson in her role on Sesame Street. Rose Jochum, director of internal initiatives at the Autism Society of America, sees Julia as "one of the kids, she's one of the gang."

We educators find this very much applies to our classroom as well. In my 11 years of teaching, I've seen the increasing numbers of students on the spectrum. And while it's something worth noting, they, too, are simply "part of the gang."

That doesn't come without its difficulties, however. In Julia's debut episode, Big Bird becomes upset with Julia and himself because he feels neglected and rebuffed by Julia. When he attempt to say hello, he is ignored. This is difficult territory for the 8'2" face of the show, as it is for the others, including Elmo (who has slowly replaced Big Bird as the epicenter of the show since I was a kid).

But Big Bird, Elmo, and the others simply learn that Julia has some eccentricities. She's very much like them, but when there's noise (in this case it's an approaching ambulance siren), she gets incredibly worked up. She often travels into her own world when at play. And she tends to "bounce" when she has fun. And that's all part of Julia being Julia.

As the characters learn of Julia's differences, they, like most children, showcase their resilience. During that interview with Leslie Stahl, they simply explain that she sees things a bit differently because she has autism.

While I was watching the 60 Minutes segment with a few students to see their response, one of my 7th graders asked, "Couldn't this be rude at the same time as it's trying to be helpful?"

"Indeed," I explained to him, "but we cannot navigate around something that's as present in our lives as autism is. Note that the show's creators aren't trying to sugarcoat what autism is. It simply..."

"Is." He completed my statement before I had the chance. "I see what they're doing here. They're teaching the rest of the world what we already know - that there are kids who are different because they have autism. And there's nothing wrong with that."

As the teacher who teaches next door to the low- and high-functioning autistic students, I cannot stress how important it is for my students to make this connection. But the lesson doesn't just end there. It continues. And it's one that all of us educators - myself included - need to continually update.

How big a deal is Julia? According to Muppet Wiki, HBO - who has an exclusive agreement to air episodes 9 months before they appear on PBS - is debuting Julia concurrently on both networks.

Come April 10th, we'll all get to observe and connect with Julia, Sesame Street's newest character. When that happens, many people's suppositions and stereotypes of those on the autistic spectrum are going to be shattered and rebuilt in a beautiful mosaic.

"Never doubt that a small group of thoughtful, committed citizens can change the world."

Indeed, Sesame Street. No need to update your mission statement now - or ever. 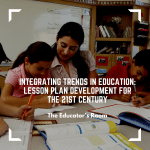 Respect in the Classroom: Earned, Not Expected
« Watch from the Balcony, Lead on the Floor
4 Ways to use the NCAA Tournament to Enhance your Math Classes »