The big scream coming from administrators, curriculum coaches, and students alike is for relevancy in teaching. Sometimes, as math teachers, we have had a hard time picking up that relevancy piece. I find that the best time to bring students into the fold is during the NCAA tournament because so much math can be taught using the raw data from sports. Keep in mind, this would work for any sport, but it works for NCAA basketball just as well. So what can you teach using team stats?

Things You Can Teach in Math Using the NCAA Tournament

The baseline of any good teaching of statistics is learning these basics. Compare two highly competitive teams in your area and see who does better in shots made/missed during a game using these measures of central tendency.

Using the information from the NCAA teams picked, students could make box-and-whisker plots of the shots made by each team to visually show not only who is "better," but who has the most deviation from the mean using the range.

Speaking of deviation from the mean, students for some reason hate finding the Mean Absolute Deviation, but what if they had to compare team scores overall throughout the playing season and how much they deviated from the mean score for the team overall? Which team was more consistent? How do they know? Great stuff to look at. In my area, it helps settle whether Duke or Carolina are better this year. What about you? Who would you compare?

If you even just wanted to compare a player's Field Goal Percentages throughout the NCAA tournament with their overall mean percent, some students may have their interest peaked.

Without even looking at whether a team is a one-seed or whatever, students can use the bracket to determine the probability of making it to the Sweet Sixteen in the NCAA Tournament, the Elite 8, the Final Four, and finally, to the championship game! Have them express it as both a fraction and a percent. Then they can create they own brackets and see how quickly their brackets get busted whether they base it on raw probability or on team standing. Once it's over, have them compare theoretical and experimental probability. So fun!

Have fun no matter which team wins the NCAA tournament...

Students will get to learn so much more about how math applies to the real world and if your team is the winner, you can just blame it on on theoretical probability or, if you want, show them through statistical data why it happened. No matter what, everyone's not only having fun but learning! 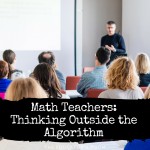 Math Teachers: Thinking Outside the Algorithm 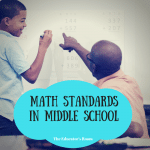 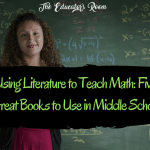