On September 22nd, Secretary of Education, Betsy DeVos, announced new and temporary guidelines regarding how schools should be handling sexual violence on college campuses. The changes are concerned directly with how individuals are found guilty of sexual misconduct.  While DeVos stated that "We can't go back to the days when allegations were swept under the rug," the new guidelines in place allows schools to enact the previous "clear and convincing" standard on cases of sexual assault, which looks to favor the accused rather than survivors of assault; however, it was made clear that schools are not going to be forced to adhere to this new standard and may continue to follow the "preponderance of evidence" guideline of the Obama-era if they choose.

What this change essentially means is that the evidence and the "standard" needed in order to be found guilty is much greater under "clear and convincing" guidelines rather than with those of the "preponderance of evidence". In an NBC News article, college disciplinary lawyer, Kimberly Lau, spoke about Obama-era guidelines and was quoted as stating that "the unintended consequences were that it did have the deck stacked against the accused students." To Ms. Lau's point, though, what we don't want to see happen is the implementation of changes that "stack the deck" against survivors of sexual violence.

If we think back to DeVos' hearing regarding her Secretary of Education nomination, this change - albeit temporary - should come as no surprise, as DeVos spoke about Title IX, sexual assault and the impact that sexual misconduct charges and accusations can have on the accused. Based on her statements during that hearing, it would seem that Mrs. DeVos is more concerned with the futures and psyche of the accused rather than with the fate and future of sexual assault survivors.

Mrs. DeVos is more concerned with the futures and psyche of the accused rather than with the fate and future of sexual assault survivors. Click To Tweet

The new guidelines also lift a time limit for investigations of sexual violence, meaning that things could drag on for quite a long time, which could prove to be traumatic for survivors who are longing to put the horrific event(s) behind them. In addition, these guidelines allow for the college or university to deny the survivor the right to appeal.

Perhaps, what is most concerning about this Title IX rollback is the message that it sends to colleges, universities, and survivors of sexual violence. As can be seen across social media, op-ed pieces, and other outlets, many were disturbed and disappointed by DeVos' Sept. 22nd announcement. For instance, Abbey Childs, from William & Mary, wrote her own type of dear colleague letter  that was featured in Refinery 29, where she stated that "the Trump administration made clear what many have expected all along: That it does not and will not stand with survivors of sexual violence on campus."

Despite the fact that  Mrs. DeVos'  claims that she does not want to return to the days "when women were essentially dismissed" - which she condones as "unacceptable" -  her actions and past statements on the issue do not necessarily convey that message to young men and women across the country.

The Future of Combating Sexual Violence

What is certainly true regarding this issue is that sexual violence on college campuses has not been handled well in this country. And, even in cases where offenders are convicted, there are many times when they only receive so much as a slap on the wrist, lest we not forget the infamous case of Brock Turner in 2016, where he essentially served less than a summer in the county jail after committing the heinous rape of an unconscious woman.

Mrs. DeVos may be right about one thing: The issue of sexual violence on college campuses is one that needs to be revisited; however, I'm not so sure that the changes proposed by DeVos and the current administration will deliver justice to those who deserve it.

What suggestions would you give to revise Title IX? Are you pleased with how Betsy Devos has used her role as Secretary of Education? 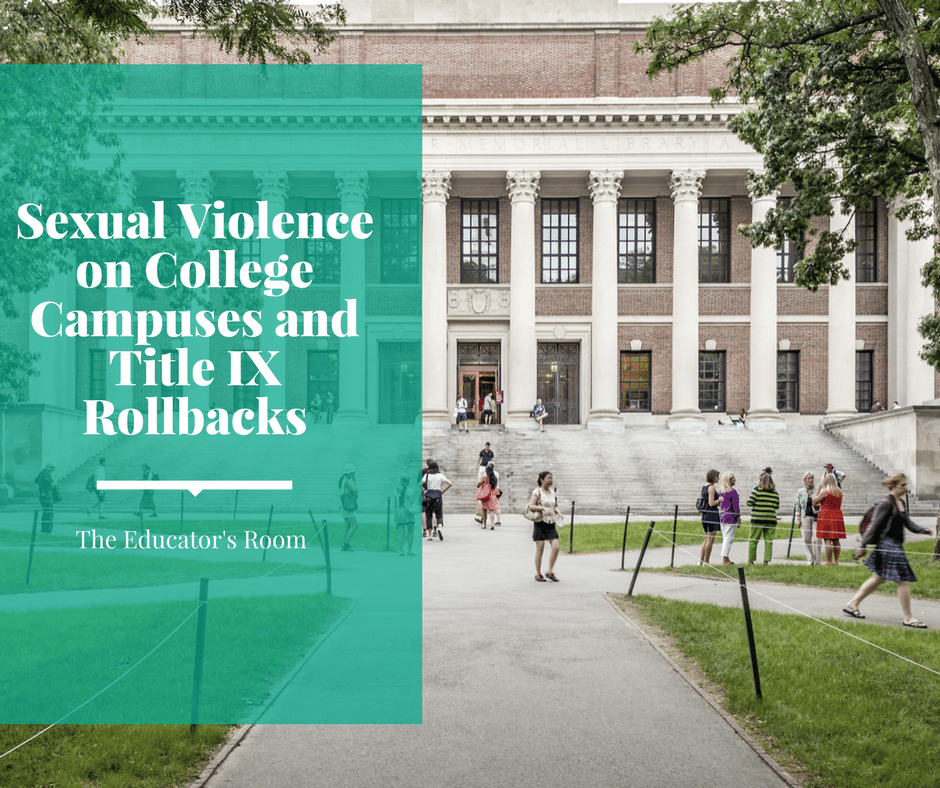 The Politics and Pedagogy of Immigration Policy
« They're More than Monuments... Reconsidering History in Classrooms
How Class Dojo Saves My Sanity Daily »