There are many pathways beyond the traditional classroom for educators to use their expertise to help students. In our modern education environment, students learn invaluable lessons from their classroom teachers, but they must also learn to navigate the world of standardized testing. Especially if high school students plan to pursue post-secondary education, the classroom is not the only place that can provide them with the tools they need to be prepared for the many assessments they will face. In this two-part series, I interview one of my most valued colleagues, Akil Bello, an expert educator who has invested himself in helping students even beyond their high school classroom experiences.  In this Part 1, I talk with Akil about what it means to be a test-preparation and supplemental education expert and his work with students, especially those students who historically don't have the same access to test preparation support. In Part 2, we will more specifically discuss the new SAT and how high school teachers can help their students understand and be prepared for this important step in the college application process for many universities.

Akil Bello is a supplemental education and test-preparation expert with more than a quarter century of experience. Beginning as a proctor with the Princeton Review in 1990, Akil has worked in every level of test preparation from proctor to CEO, he has helped launch two companies, developed dozens of preparation programs for more than ten different high-stakes tests, trained hundreds of instructors, and helped thousands of students achieve success.  Prior to returning to work for The Princeton Review, Akil was founding partner and CEO for Bell Curves, a test preparation company where he worked extensively to building community partnerships and programs. As an active member in his community, Akil routinely provides advice and workshops on test preparation and achieving educational success with limited resources. Akil's current role is the Director of Strategic Initiatives at The Princeton Review, where his focus is helping public schools, non-profit organizations, and community based organizations understand standardize tests and develop affordable solutions for their students.

Cari Harris:  How do you see test prep education's position in overall education?  In other words, where does it fit into how we think about the important aspects of education/preparation for higher ed?

Akil Bello: Test prep is to me the logical development from a trend that likely began with after-school help (initially provided by parents, then by teachers). The industry emerged in response to a demand for help outside of the school day and specifically for the increasing number of high stakes tests. As with so many other things in western society, as long as there is a demand for something, businesses will develop to monetize that demand and provide a service to meet that demand. I don't think test prep is much different than the paid apprenticeships of the middle ages. Yes it favors the wealthy because it provides them more options, but to what extent can and should that be controlled. It seems that given the entrepreneurial and capitalistic society we live in, test prep (and other forms of shadow education) will continue to be an integral part of the education landscape.

Additionally, I think of test prep as a sort of icing on the cake. It's not intended to be part of formal education, it's supplemental by nature, it's extra, it's the gravy on the mashed potatoes. If the educational system is working perfectly and equally, the advantages conveyed by test preparation are fairly minimal. However, if the educational system itself is flawed and education is non-standardized, unequal, and inconsistent and testing is standardized then test preparation will not only have a non-trivial impact but will become increasingly important and necessary for success. From my point of view the impact of test preparation is inherently linked to what has happened in years before test preparation is even a consideration in a child's life.

AB: Again since I love analogies I offer you these parallels: How does AAU promote social justice or equal access to the NBA? How does joining a gym promote equal access to a healthy lifestyle? The answer in all these cases is it doesn't. I don't think test prep as concept does or can support access to opportunity. As it currently stands "true" test prep is accessible to only a portion of the country and is generally at a cost, this inherently increases inequity. Individual test prep companies can support social justice in the way they deliver their services. Individual companies can work to provide services at lower costs and in partnerships with those who would not be able to access those services on their own. Individual companies can work to advocate for fairness and reasonableness in testing, which benefits all. Individual companies can work to inform students about steps they can take within their means to access the best possible resources to succeed on the tests. But as an industry test prep is designed to give advantage to a select few.

CH: Can you describe generally how SAT prep education works, what it looks like for a student, when a student should consider pursuing it, etc?

AB: Let me describe the ideal rather than the general, that way we can encourage readers to do what's best. Ideally your typical rising junior would do the following or something close to it:

What test prep activities are part of that prep windows will vary greatly depending on the resources the student has access to, their motivation to dedicate the time for prep, starting score and availability of test prep services. Also, this outline ignores some key factors that are probably too complex to address here, things like the ACT and how that would factor in, and for aggressive or high achieving students starting earlier is probably important.

CH: What are the biggest challenges you face as a test prep educator?

AB: The biggest challenges for me have been that I'm always evaluated by a student's performance on a standardized test I didn't have any control over, I also have no control over my curriculum, my students are all being taught or were taught the same topics I'm teaching them by other teachers who might be contradicting the advice I want them to follow, and I'm always competing for priority of my student's limited time. To me there are lots of parallels to coaching: the Knicks hired Derek Fisher and gave him limited talent to work with, while the Warriors hired Steve Kerr and gave him a highly successful team, both were asked to compete for the same NBA championship.

CH: What are some of the best parts of being a test prep educator?

AB: The best part of being a test prep teacher is that I can have a pretty big impact on someone in a small timeframe. As a supplemental educator I'm also not limited to particular approaches, rules, or methods so I can always be the "cool teacher." It's amazingly gratifying hearing "I've never thought of it like that before, it makes so much sense now." I think that test prep, especially for the SAT, encourages a particular kind of out of the box thinking that is amazingly fun and liberating for students when they see past the difficulties to the simplicity and slickness of thinking that many of the questions require.

CH: What else would you like to say about your field, your students, test prep education in general or specifically?

AB: A core thing that many overlook about test preparation is that at its core it's teaching. It's teaching that is narrowly focused on one exam at a time, but it's grounded in real skills that students need and should have been exposed to in their education. Many overlook that while there are strategies to improve scores, test prep isn't a magic show built on illusions of learning. It's also not a cash for points exchange in which simply paying gains improved scores. There is real teaching and learning taking place every time someone prepares for a test.

Next week, in Part 2, Akil responds specifically to my inquiries about the new SAT and how classroom teachers can support their students pursuing post-secondary education.

What are We Testing? - PARCC and SBAC 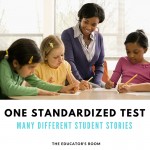 One Standardized Test, Many Different Student Stories
« My Experience with TNCore - the Tennessee State Standards
Teaching is Such a Racket »