The New Jersey Education Association (NJEA) is running several commercials that air concerns of both parents and teachers about PARCC (Partnership for Assessment of Readiness for College and Careers) standardized tests currently being administered in the state. Concerns include: middle school students getting only a half year of science and social studies in order to leave time in the roster for test prep classes, computerized testing being touted as a better measure of student achievement than the observations of the teachers who see the children every day and children feeling stressed because of the workload to be ready for the test. Because my home state of Pennsylvania is not using either test but one of its own design I decided to take a look at why the PARCC and SBAC (Smarter Balanced Assessment Consortium) are so controversial.

When the Common Core standards were developed I thought that the tests would be aligned to the standards. What I discovered is that two separate consortia with different member states constructed two different tests. PARCC contracted with Pearson and several subcontractors to produce their tests. SBAC did an open call to educators in their member states who wished to be part of the test development.

Test administration for both PARCC and SBAC is computer based. SBAC is set up to be administered on the existing computer systems in member states. PARCC has notified its participating states that the 2014-2015 tests should work on their current computer systems but that the 2015-2016 test will probably require upgrades to computer systems, even if the current systems are adequate for normal classroom use.

Considering concerns I have heard raised by parents and elementary teachers alike I decided to take the grade 3 math practice test for both PARCC and SBAC. I chose grade 3 because of questions about the appropriateness of the lower elementary math standards for the ages of the students being tested.

I took the PARCC grade 3 math test first. It seemed to have a very complicated platform for answering questions. I had difficulty responding to the first few questions due to the answer format. The questions were in 3 forms – simple answer, multiple choice questions, and more complicated questions that required multiple steps to solve along with a written explanation for the method used. I found the multiple choice questions problematic because some required choosing one answer, others said there were two correct answers, and still others required students to choose all of the correct answers. I would imagine a 3rd grader would find this confusing and daunting. I also thought that some of the vocabulary was above what the average 3rd grader could comprehend.

The SBAC grade 3 math test platform was less complicated and seemed to be more age appropriate. There was a wider variety of math topics tested and short answer questions that required multiple steps were much clearer to respond to. This test definitely covered grade 3 math topics from Common Core but I believe that the format is more appropriate to children in this age group.

My experience taking these two tests left me asking something that I have not heard voiced in the debate over these tests. That question is- What are we actually testing?

If a test is computer based it seems that we are testing both computer skills and the actual subject (math or language arts). Many schools do not have computers available in every classroom. Many of those schools teach children who live in households that do not have computers. Doesn’t this actually risk these children performing poorly based on their lack of computer skills rather than their poor subject knowledge?

Both PARCC and SBAC allow students to do calculations on paper but the answers must then be entered on the computer. Calculators are not allowed at this grade. In my opinion, this means that 3rd graders are being asked to coordinate paper calculations followed by entry of answers on the computer. Are we also testing organization skills as well as computer skills and subject matter?

If we are requiring 3rd graders to complete multi-step word problems, are we not also testing their reading ability? If a child struggles with some words and is working alone on the computer isn’t it possible that he will skip an entire question even though he might know how to solve it if he could ask what a word is? (I ask this question because even when I administered standardized tests to my 8th graders the teacher administration manual said that a word could be read if a student asked as long as it was not during the reading test.)

Finally I must ask – Why are we not testing science and social studies? Because we seem to emphasize only subjects that are tested aren’t we limiting what our children learn for the sake of a test?

I would love to hear any experience that you may have with either of these tests so please leave a comment.

Teachers in the United States Are NOT the Problem 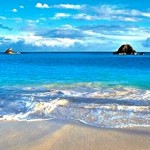 The Traveling Teacher: Bermuda A Lovely Place to Life and Teach
« The Best Teaching Happens in the “Worst” Schools
Assessing the Damage: What students should know about tests like Smarter Balanced »