I am a social studies educator.  Emblazoned on the wall of my classroom is a sign proclaiming “I Teach Hard History.”  Earlier this year my students looked at vivid, graphic, and unfiltered views of the Middle Passage that brought enslaved Africans to the New World.  I’ve challenged students to think about whether or not the American Revolution was truly revolutionary at all. Currently, my students are studying Andrew Jackson in order to decide if he should be memorialized on the $20 bill.

Because I teach hard history, if you walk into my room, you might see something that upsets or offends you.  For example, imagine walking into my class the day we examine slave ship Captain Thomas Phillips’ account of the Middle Passage.  Projected on the board is his proclamation, “...After all our pains and care to give [the slaves] their messes, . . . keeping their lodgings as clean and sweet as possible, and enduring so much misery and stench so long among creatures nastier than swine, only to be defeated by their mortality. . . .”  On the board next to this passage, is the question: who is to blame for the misery of the Middle Passage? And, if you could only judge my work by that moment, you would conclude that I am a flaming racist; I teach students to blame slaves for their own deaths. You wouldn’t have any choice because you entered from a place of ignorance.

Last week in Baltimore a teacher displayed an internet meme that has sparked outrage.  The meme pictured President Trump captioned by “wants to round up a group of people and build a giant wall.”  Beneath the picture of President Trump was a swastika and a hammer and sickle. Those pictures were labeled “been there,” and “done that.”  According to the Baltimore County Public Schools (BCPS), the offending meme was part of an AP US History lesson about “World Wars and the attempts by some leaders throughout history to limit or prevent migration into certain countries.”

Now, any worthwhile social studies educator is going to be pushing, challenging, and exposing students to a controversial and difficult subject matter.  Does that mean they are perfect? No. Does that mean they always strike the right tone? Nope. That doesn’t mean teachers shouldn’t expose their students to difficult ideas.  And, it doesn’t mean this teacher got it right either.

But, the biggest lesson from this controversy is that we aren’t carrying the lessons learned in social studies classrooms into our greater society.  A big part of being a social studies educator is to get students asking questions about sources and evidence before making conclusions. Students must consider what was going on at the time, who provided the evidence, was the author sincere, and on.  That’s not happening. For example, Maryland State Delegate Kathy Szeliga concluded that the offending slide was “propaganda” and “Educational malfeasance of the highest degree” in her Facebook alerting her followers of the issue. She made those conclusions before demanding answers or asking questions.  That’s social studies education failing in plain sight. The process is clear: investigate first and make conclusions second.

The problem is that our society doesn’t have the patience, interest, or concern to inquire and learn about an issue before they judge it. Click To Tweet

The problem is not that teachers are being overly political.  The problem is that our society doesn’t have the patience, interest, or concern to inquire and learn about an issue before they judge it.  That could be a failure of teachers and our education system, and we should fix it. But, calling for teachers to be fired over one PowerPoint slide is an existential threat to our society.  If teachers never broach controversy or uncomfortable topics, we won’t grow. Being unable to critically examine an issue is to automatically default to the status quo.

I say all of this knowing what it is to mess up teaching hard history.  The day Captain Phillips’ danced across my board I got an email from a concerned parent.  She was worried about what I was teaching, afraid I was ignoring or denying the plight of enslaved Africans.  Thankfully, she had talked to her child, and her child hadn’t posted a picture on Twitter. I talked with her and explained how the lesson fits in a strategic sequence of events, and how I was trying to teach students about power imbalances and control.  The plan had been to juxtapose Captain Phillips’ words with those of Olaudah Equiano, an enslaved African, who wrote about his experiences on the Middle Passage. Time got away from me that day, and I learned something. Luckily, I got that opportunity without being maligned and threatened. 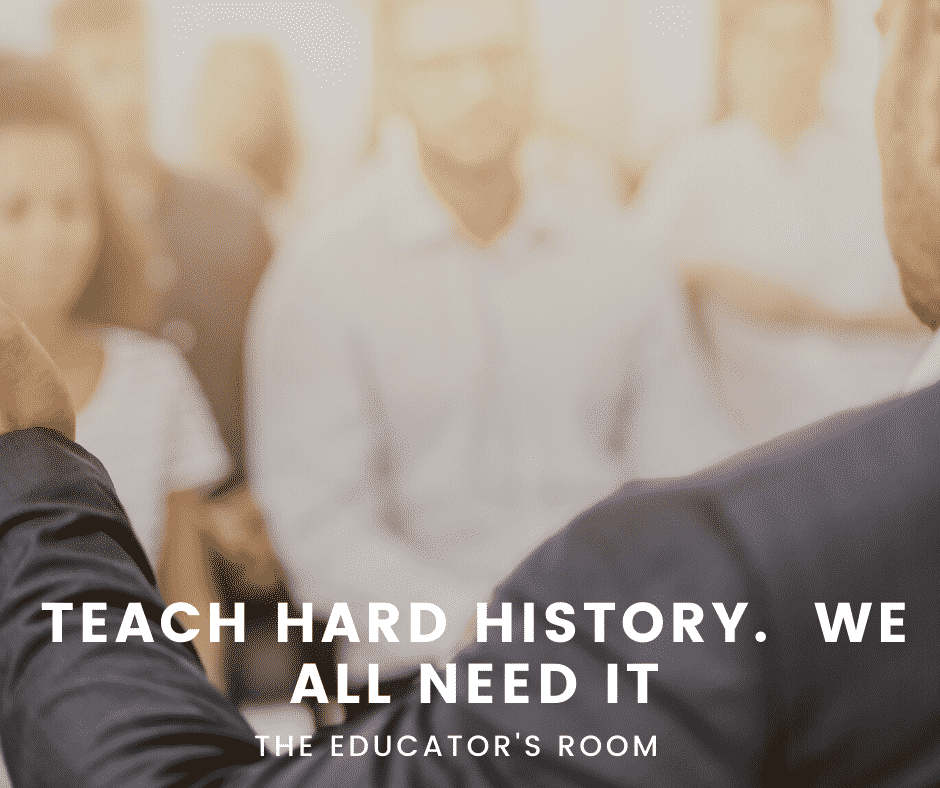