The people who are captured on camera are usually dumb-founded or give answers that make the audience and/or the questioner laugh (or cry).

I used to think it had to be difficult for these camera crews to find students who didn’t know who the Vice-President was, or who couldn’t name the “chief executive” of the federal government, or list how many amendments are in the Bill of Rights, or acknowledge that Lincoln was the president before FDR, who was president before Reagan.

But then I started to do an experiment on the first day of school.

I would show them pictures of the Speaker of the House, the Chief Justice, or their congressman. Few of the students knew who any of these people were—and I teach advanced placement and college courses! I would put up buildings—the capitol, Monticello, the Parthenon—and the projected structures would elicit shrugs and blank stares. Clearly the late night comics had a fertile population to film.

Next I would put up pictures of the Kardashian clan, Katy Perry, or Kendrick Lamar. Giggles erupted and hands would shoot up.

“Of course we know THEM,” they seem to say in concert.

But something IS different. What bothers me and many teachers across the country is not that our students are ignorant about the basic facts of their culture and country. Yes, on one level what bothers us is that our students live and breathe in a cultural orbit that permits them to become adults without prodding them to master the basics of the civilizations they are inheriting (and hopefully, perpetuating).

But the problem is more nuanced and profound. It’s not that our students don’t learn and read on their own. They most certainly do. It’s that they devote so much of their time to following the lives and actions of people who are famous without being particularly consequential. In short, they are unknowing apostles who subscribe to the cult of celebrity and all that that entails.

Too many of our students have been programmed to believe that fame, or agathos to use the ancient Greek term from the Homeric era, is the ultimate and highest achievement one can aspire to. To be “followed” on social media, “liked” when one posts, and “covered,” even in the midst life’s most frivolous moments (going to the store or getting a cup of coffee) is the hope, it seems.

The sheer act of being observed, photographed, and endlessly commented upon kindles a form of joy in our students that appears to be a new fixture of the first highly digitalized, interconnected generation of American students.

They seem to believe that the attainment of euphoric self-worth is somehow contingent on the quantity of one’s “followers,” that heroic claims of importance or significance swivel around an axel of notoriety rather than old-fashioned claims of achievement or social contribution. One’s value to the world is no longer qualitative, but stridently quantitative.

Aspiration, a call to fullness, the ascent towards that which is both authentic and inherently meaningful, a station of being in which one’s inner-angst is remedied by the certainty of one’s outer resolve, are utterly meaningless objectives to young people who believe celebrity is the goal, not the byproduct of doing something noble or grand.

Indeed, Steve Jobs is famous because he co-created Apple. Jonathan Franzen or Donna Tartt are famous because they write highly-acclaimed novels. Warren Buffet is known because he is the most successful investor in American history. Yo Yo Ma captures a slice of heaven when playing the cello.

Being famous is derivative, not primary. Their aim was the creation of new technology or literature or investment returns.

I fear the cult of celebrity confuses our students. It repudiates a significant life in favor of a famous life. Once seduced into this paradigm of value, students will naturally conclude that a moment is only significant if it is viewed by countless others.

Of course, dreaming of eminence is the most American of dreams, even if the dream is an unformed, vastly inchoate fantasia of youthful ambition. Study the names of history—Caesar, Napoleon, Lincoln, thousands more for that matter—and the inescapable longing for distinction burns bright. So what’s so different about America’s current mania? Are American students any different from ages past?

I think so. The cult of celebrity has an allure that confounds those of us who believe the most meaningful things in life are typically the most private—cultivating friendships, facilitating faith, fostering family unity. The cult of celebrity draws many of our students into a futile and frivolous vortex of banality. After all, they do not engage with the people they observe from afar. They do not talk to them, befriend them, or learn from them.

Instead, celebrities become the fodder of discussion and derision, sometimes light and playful, sometimes cynical and snarky. Who doesn’t enjoy a few minutes of Access Hollywood or TMZ every now and then? But something has gone radically amiss when students aspire to fame without considering the achievement that is supposed to accompany it.

Thus we arrive at the American classroom. Whatever subject and population we teach, we want our students to know that education is somehow connected to the people we become. We want education to be central to their lives, not merely a distraction or a nuance. We want them to reach high and dream big but to never confuse the goal with the consequence.

Indeed, one is struck when studying the early years of Martin Luther King’s struggle for civil rights. The burdens of being famous were very different and more taxing, at times, than the demands of the actual movement he led.

King commented that, “I am conscious of two Martin Luther Kings. I am a wonder to myself…I am mystified at my own career. The Martin Luther King that the people talk about seems to me somebody foreign to me.” What was important to MLK, of course, was not the celebrity his efforts stoked, but the cause he devoted himself to, a cause that was bigger than himself, a cause that led him to be stabbed, imprisoned, and ultimately assassinated.

The cult of celebrity is dangerous for it exalts the MLK that King, himself, seems to renounce. The version that made his life meaningful was the one that took him to “the mountain top,” the one that situated him in constant peril, the one that inspired him to understand that “to suffer in a righteous cause is to grow to our humanity’s full stature. If only to save ourselves, we need the vision to see the ordeals of this generation as the opportunity to transform ourselves and American society.”

Indeed, no matter one’s world-view or moral code, a life that flourishes is almost always devoted to causes and concerns bigger than the aggrandizement of the self, be it one’s country, one’s God, or a social ideal heretofore unrealized.

The problem with celebrity obsession is it is almost exclusively inward in nature, focused on the “I,” the “Me,” and the projection of the self into as many phones, TV’s, and computer screens as possible. Omniscience in the world might be titillating for a moment, but being hollow on the inside is a fate we teachers should help our students to avoid at all costs. 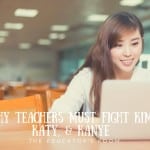