I get really tired of excuses.  In fact, in my classroom when my 8th graders try to excuse their behavior, lack of homework, or unpreparedness I tell them kindly yet firmly, “Excuses are useless.”

Initially quizzical looks form on their faces, and then they start to stammer…which is exactly when I interject my reasoning.  Everyone has issues.  Everyone is busy.  Everyone can blame someone, something, or some “whatever” for anything.  But what’s the point?

Last week I had a day ‘off’ to attend a workshop. For teachers, attending workshops is equivalent to taking a course for a day, except that we have homework before (lesson plans) and after (fixing up messed up lesson plans). I knew I’d have a mess to fix up when one of my college interns texted me to tell me how horribly things had gone in my absence. She was absolutely devastated.

As soon as class started, I asked the group to tell me what happened. To my surprise, they started gushing out things like, “Well, it wasn’t good. The sub didn’t step in and do anything to keep people on task” and “We were much more distracted than usual, but the sub just sat there.”

After thanking them for their honesty, I launched into my “Character is what you do when nobody's watching” speech. They instantly stopped talking. I reminded them that no one can ‘make’ them be on task and that by blaming it on a sub for not stepping in, they were making excuses for their behavior.

I told them I was impressed with how much power they gave away.

I could feel the thinking going on. They’ve come so far this year with accepting responsibility for their actions, I was sincerely shocked that they so quickly went to blame.

It’s not about the excuse.  It’s about being responsible, respectful, honest and courageous enough to create the kind of success we want in life.

“Suppose I took a fishing line,” I asked. “And at the end of that line was a big hook. And suppose I just hooked the back of your shirt.”

“That would hurt,” a boy in the front quipped.

“And suppose I yanked on the line every time I wanted you to do something - like a puppeteer. Would you like that?”

Murmurs of disagreement rumbled through the room.

I could see the wheels turning in their minds. Some get the idea more quickly than others.  Some, I know, are still in denial.

You see, teaching for me is much more than the English curriculum, or learning the right way to phrase a question. For me, teaching is about life. It’s sharing strategies to teach kids that they can do ‘it’ - whatever ‘it’ is. I want them to learn to learn how to become their best selves before all their choices have been made for them, and they’re left wishing they had done something differently. 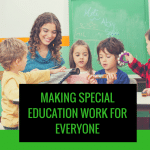 Making Special Education Work For Everyone