American democracy is at a crossroads. In November of this year, the American electorate will go to the polls to decide which party should control the Congress of the United States and set policy on the federal level. Majorities in many state legislatures and governorships across the nation will also be decided. As it stands currently, the Republican Party controls majorities in thirty out of fifty states, and it controls both houses of Congress. In effect, the 2018 mid-term election will be a referendum on the effectiveness and policies of the GOP since the election of Donald Trump in 2016. The election will decide the direction of our nation in terms of domestic and foreign policy. Teachers stand to play a major role in the decision-making process, and their lives will be directly affected by the policies that are created once the 116th Congress is installed in January of 2019.

For many Americans, quite possibly a majority, the election of Donald Trump was the catalyst for a slow demolition of American democratic institutions. The president has been under investigation for possible collusion with Russia during the 2016 election. His actions seem to indicate that the rule of law does not apply to him or his cabinet. Though he campaigned on a slogan of “drain the swamp” and “lock her up,” referring to the email scandal of Democratic nominee Hilary Clinton, a number of the president’s cabinet officials have had to resign or are under fire for corruption, excessive spending, and greed, and several, including Education Secretary Betsy DeVos, have been guilty of at best incompetence, or at worst, malfeasance, while in office.

The president has been openly critical of the free press, the independent judiciary, and the law enforcement institutions of the FBI and Justice Department when these agencies are designed to act within but not independent of the Executive Branch. For this president, a cabinet member’s efficacy is measured not in how well he serves the county, but how well he or she demonstrates loyalty to the president. Elected officials in Congress and other levels of government have described the Trump Administration as hostile to the US Constitution and to the democratic principles the Constitution has enshrined in our government. These issues are at the heart of the 2018 mid-term election, and voters in both Democratic and Republican Parties will vote in a way that either corrects our government’s political dysfunction by restoring the checks and balances system, or voters will enable its erosion by ignoring the abuse of presidential power.

When they vote for their members of the House of Representatives, US Senators, and state assemblypersons, they must consider the voting record or platform of those lawmakers. Click To Tweet

There are a number of issues that have a direct impact on the lives of America’s educational community. This community is widely diverse as it includes not only teachers and students, but parents, school support personnel, administrators, school boards, and local county councils. All of these groups can consider themselves as stakeholders in the educational community. When they vote for their members of the House of Representatives, US Senators, and state assemblypersons, they must consider the voting record or platform of those lawmakers regarding such issues as:

The increase in school shootings and mass shootings around the nation has motivated young people around the nation to call on localities to make changes in both gun laws as well as school safety. The Democratic Party has long supported an assault weapons ban and more stringent background checks. The Republican Party has stressed the importance of the Second Amendment’s right to bear arms and the enforcement of existing gun access laws. Since the Parkland shooting, there has been a vocal outcry from educators and students to pass tougher anti-gun violence measures at all levels of government. For these activists, they will match the NRA in power at the voting booth to remove legislators unwilling to make law their demands for greater gun safety.

The 115th Congress enacted the Tax Cut and Jobs act of 2018, but the jury is still out if the law will result in greater spending power for the middle class, a goal many teachers aspire to as they struggle to pay the bills, put food on the table and put their kids through college. For the GOP, it was a great legislative victory. Their party orthodoxy states that when corporations and the wealthy have increased spending power, all boats will be raised, and the lower echelons of the American economy will reap the benefits of their increased wealth. This theory was popularized by the Reagan Administration as “supply-side economics.”

The problem is that when the government takes in less revenue, it increases the federal debt, in this case, by $1.5 trillion dollars. To make up the difference, GOP lawmakers could put entitlement programs such as social security, Medicare, and Medicaid on the chopping block. Federal assistance to public schools, grants for medical research, and efforts to protect the environment could all be reduced or eliminated to make up the difference in reduced tax revenue. If the expected economic growth of 3% increase in the US GDP is not forthcoming, the middle class can expect tax increases in the near future.

The Future of Education in America

Over the past few weeks and months, teachers in West Virginia, Kentucky, Oklahoma, and Arizona have gone on strike to protest inadequate salaries and lower per-pupil expenditures in their districts. They have marched on their state legislatures to bring about increased spending on education even if it means increasing property taxes to finance increased teacher salaries, school repair and construction, and smaller class sizes. K-12 education is primarily a state responsibility, but the federal government has the ability to divert or infuse its resources to support public education.

Under the auspices of Education Secretary Betsy DeVos, proposals to shift public school assistance to private schools in the name of “school choice” through a program of vouchers has been floated. For public school teachers, this plan symbolizes the administration’s antipathy toward public schools. In the name of states’ rights, according to her opponents, critical federal funds are being diverted toward the privatization of public education. For public school teachers, these policies are a direct attack on them as professionals and on the institution of public education in the United States.

The Future of the Trump Administration

The future members of the 116th Congress will also have the power to impeach and remove the current president if ongoing investigations show that his actions rise to the level of “high crimes and misdemeanors.” Two-thirds of the Senate (67 senators) is needed to remove a president, something that has never happened in American history. It will require a massive tsunami of Democratic voters in what is already being called a “wave” election to bring about the number of Democratic votes needed to have an impact on the Trump presidency. Democrats can hope to turn the ship of state in their direction with President Trump at the helm if they can bring about veto-proof majorities in both houses of Congress.

What Kind of Nation Do Teachers Want?

Along with the family, schools are an important institution by which our nation is socialized with an impact on our politics and the social fabric of the people themselves. The mid-terms are important enough in that their effect on schools may have an impact on the type of nation we become. Most teachers want an inclusive society, where all children are cherished no matter where they come from or what their background is. Teachers profess to want to help all of their students and their families, but they demand the necessary resources to make a quality education for all possible.

Most teachers want an inclusive society, where all children are cherished no matter where they come from or what their background is... Click To Tweet

Teachers also celebrate diversity in their communities and schools. They set up equity committees and have courageous conversations so that all races, religions, ethnic groups, and people of differing sexual orientations feel included in the educational community at large. Teachers want a safe space for all of their students to learn and excel in spite of differences in economic standing, ethnic background, or even immigrant status. The 2018 mid-terms will be the expression of movement where these values will be celebrated or deferred. For teachers to have an impact in the outcome of the election, they must organize, be politically active, and as the civics curriculum of many states claims, they must be willing to exercise their responsibility as citizens. The primary election comes first, usually in June of 2018. In this first preliminary election, voters “vote their heart” as they decide who will be the nominee of their party for any given seat in government.

In the general election in November, the members of the American electorate will “vote their head,” reasoning out which party’s candidate will be the best representative of their views. They may choose to vote for one party or the other, but by voting their conscience, they strengthen the democratic institutions we have come to cherish under the Constitution. 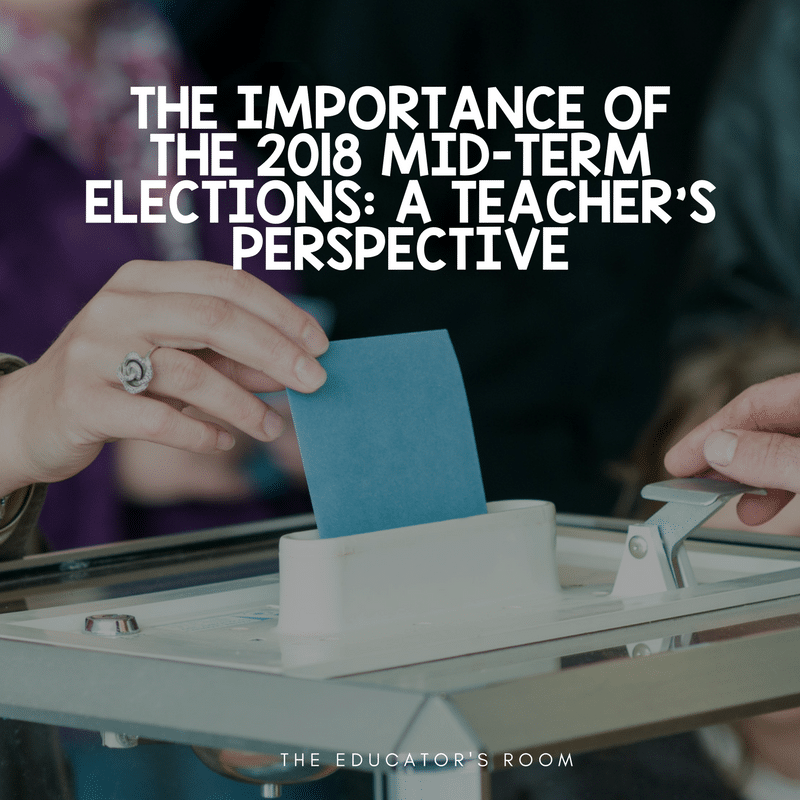 Equity in Action: Mitigating Unconscious Bias In the Classroom
« Dear Madame Secretary DeVos: We Will Not Be Ignored
The State of the Teacher Union »