Politics has infiltrated K-12 education to an extreme level. We have seen it before: The Scopes “Monkey” Trial of 1925, the battles over integration after the 1954 landmark Supreme Court ruling Brown v. Board of Education of Topeka. Today, 36 states have bills pending or passed that make it illegal to teach “critical race theory,” a college-level framework that looks at the systemic nature of racism and discrimination in American history and society. It seems that America’s majority white culture, emboldened by the overt white nationalism central to the cult of Donald Trump and his presidency, is now unwilling to have the roots of its racism exposed in secondary History and English classes.

The 2021 gubernatorial race of Virginia was centered around parent involvement in public education with candidate Glen Youngkin promising to give parents a greater voice in the development of curriculum in Virginia’s public schools. With his victory, the state legislature is considering bills that will codify a form of whitewashing of American history to conceal its uglier side with the goal of sparing the feelings of K-12 students, or more succinctly, of their parents. Parents are now encouraged to report any anxiety or uneasy feelings experienced by their children through a tip line where parents can report teachers engaging in radical lessons. Such a tip line smacks of McCarthyism and Big Brotherism, destined to put a chilling effect on educators willing to engage in an honest dialogue about the content they must teach according to the state and local curriculum.

Teaching Truth: Teachers shouldn't have to compromise on issues of hatred, racism, or prejudice Click To Tweet

Starting during the Trump years, Americans have lost their sense of a shared, common set of values or an agreed-upon reality. Trump aide Kelly Ann Conway coined the term “alternative facts” as President Trump told his followers that what they were seeing in the media was “fake news.” Many educators of all political stripes realized that America was on a slippery slope to its own form of American fascism, where elected leaders told lies and told them big in order to remain in power. If they repeated these lies enough, large numbers of people would believe them. After the 2020 election, Trump’s claim that the election was stolen would become that “Big Lie,” reminiscent of Nazi propaganda used to perpetuate the early stages of the Holocaust on the people of Germany during the 1930s.

In fact, Trump’s Reichstag moment would come on January 6, 2021, when the US Capitol was stormed in a violent insurrection with the goal of overturning the 2020 election in a “self-coup.” Educators can’t discuss the events of this period without incurring the wrath of pro-Trump parents, who still claim the election was stolen by Joe Biden and his liberal minions in Congress and around the nation. Americans continue to operate in two separate political universes, unable to agree that the guardrails of American democracy were stretched to their limits during the Trump presidency. The rule of law, our electoral process, and our American democracy continue to hang in the balance.

Educators who teach challenging topics in history or literature are liable to experience wide-reaching consequences that can threaten their livelihoods and their emotional stability. Students are the ones who will lose out the most in the long run. Almost 40 years ago, I entered teaching to help students eliminate prejudice in their lives and in the world. Through a study of history, I wanted to help students understand the importance of how slavery contributed to the Civil War. In every state’s curriculum, we learn that in the wake of the Civil War, black codes, Jim Crow, and the Civil Rights Movement were all experienced by America's black population. America itself was built on the stolen land of Native Americans and the backs of immigrants, many of whom suffered discrimination and forced assimilation during the 19th and 20th Centuries.

My parents immigrated after surviving the Nazi Holocaust in Europe during World war II, and it was their message of acceptance that I wanted to repeat and put into effect in the secondary classroom, but in order to achieve this goal, it is necessary to learn about the ugly side of being human, what has popularly come to be known as “man’s inhumanity to man.” Teachers must help students learn about the causes and expressions of human prejudice and evil if there is any hope of moving towards what the Founding Fathers called in the Preamble to the Constitution “a more perfect union.” The maxim given to us by George Santayana comes to mind even when teaching 7th Grade US History, that "Those who cannot remember the past are condemned to repeat it." (George Santayana (1905) Reason in Common Sense, p. 284, volume 1 of The Life of Reason as stated in Wikipedia, 2022).

So what now? Should teachers resist the pressure to squelch any discussion about prejudice, discrimination, or injustice in American history if parents object to the challenging topics of their curricula? There have been a number of instances when I have had to defend my content or methods to parents in an administrator’s office, experiencing what the late Congressman John Lewis called “good trouble, necessary trouble.” Fortunately, I had a strong administrator who was willing to “roll the tape” on my lesson to discover that I was staying within the curriculum and the confines of the lesson without sharing my political viewpoint on any given issue, which in this case, was the message and action of the  Black Lives Matter Movement. I had to confront the parent with the truth, that the “all lives matter” analysis is a form of concealed discrimination. I acknowledged that police officers must make split-second decisions under stressful circumstances, but I also had to show students that there exists systemic racism against unarmed black citizens as was seen in the George Floyd case. My principal backed me up because these concepts were part of the county-issued assessment I was required to use.

Even though I am politically active in my community and with my teachers' union, I do not share my political views with my students. If they ask my party affiliation, I tell them that if they can tell what party I belong to, I am not doing my job well. It is critical to outline all sides of a given issue, historical or contemporary. What I have said to administrators is that I will not compromise on issues of hatred, racism, or prejudice. It is up to us educators to help students form values that support acceptance, pluralism, and multiculturalism. We live in a multicultural society with intersecting identities and demographics, and our values must support this intersectionality.

When people say, “I don’t see race or color,” they are denying the history and culture of that group, and their stories must be acknowledged in the telling of American history. It’s important to be sure that all people are treated equally and given the same chance at success, which is the basis of the Equity Movement in K-12 education. Equity does not mean being color blind. It means acknowledging the rich nature of the American tapestry. Our lessons must reflect and give voice to all of the backgrounds and experiences present in our nation’s classrooms. 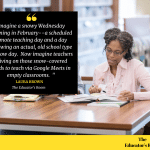 Nobody Trusts Teachers
« My Twenty-Five Minute Lunchtime Lesson on Humility
Teacher Pay Equity: I Could Afford to Stay in Education Because I Had a Partner Who Financially Supports Me »