I am not usually a big fan of technology in the classroom.  To quote a former colleague on the subject, it’s often just “window dressing.”

Just because students are using computers or smart boards or document projectors doesn’t mean that they are learning 21st century skills.  If all that they are doing is coloring in a printout of a president’s head (using sophisticated technology), that is hardly preparing them for a world that is changing so quickly that it will require innovation, creativity, and originality if they want to keep up.

I want to teach my students to think for themselves and to communicate their ideas, and I don’t always need technology to do that.

But I admit to using technology every once in a while in the classroom.  And sometimes, it is quite helpful.

This is the technology I reluctantly used and begrudgingly liked in my classroom.

-- Chromebooks and Google Docs.  My school bought a set of chrome books for the classroom about three years ago.  Since then, they have added enough so that over 200 kids could be on a computer at the same time during the day.  At first, they were frustrating.  Since Google Docs is constantly saving work, you have to be connected to the internet if you want to write anything.  So, I quickly learned to stop doing timed essays this way.

But when it comes to longer writing assignments, especially when we are doing a workshop form and spending class time on drafts and revision, it is pretty amazing to be able to check in with students while they write—and without reading over their shoulders.  Reading quickly, I could scan an entire class’s drafts in one class period and give them instant feedback while they wrote.  Even though the computers’ batteries were fairly disappointing, they were absolutely a worthwhile purchase.  We spent much more time writing in class than ever before.

The combination of Chromebooks and Google Docs also added a whole new dimension to group projects.  I once had a group of three extremely shy students work together on a play.  They wrote the whole piece collaboratively, but they hardly spoke a word to one another.  Instead, they edited and wrote on one document.  Their final draft was one of the best that year.

-- Online grading programs.  I have used a few through the years, and until my school required me to post grades in their online system, I actually paid for the service with my own money.  It was that valuable.

Besides the fact that I was encouraging the need for instant gratification in that students could see their grades any time they wanted, I was covering my own butt in a few ways.  One was that students could catch mistakes.  I often say that if I am 99 percent accurate in my grading, I will still make like 10 mistakes a quarter.  So, when I gave the A to the student alphabetically below the student who had actually earned it, we caught the mistake right away.

It was also great to be able to communicate frequently with parents without as much effort on my part.  With the best program that I used, I could just click a button and an automated email would go out with the updated grades.  Parents could choose to check them or not, and they could follow up with any questions.

-- A projector.  No, I don’t mean one of those old overhead projectors—I never really did figure those things out.  I had a projector that was attached to my computer and faced the white board.  I could use it to watch DVDs or youtube videos, and I also used it to project exemplar writing or drafts to workshop as a class.  I didn’t use it as often as I would have liked—and a document projector was definitely on my list as well—but it got lots of use in my room.

Ultimately, I never really worried about teaching students to use technology.  Generation Z (or iGen or the Homeland Generation or whatever they’ll be called) has grown up with cell phones attached to their hands.  They will figure out anything with buttons all by themselves.

Yes, I am the teacher who stands at the front of the room for five full minutes before I realize that I haven't plugged in the device that I can’t get to work, but even I can see some benefit of technology in the classroom.

As long as it isn’t just there as window dressing.

Are you a techno-sceptic?  How have you used technology to add real value to your classroom? 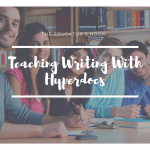 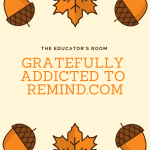 Digging Into Learning: Using Archaeology in the Classroom
« Why You Should Feel PUMPED About a New School Year
Easing Those First Day Jitters »