Now that testing mode is in full throttle, the stress levels around schools can be cut with a knife. Along with testing mode comes multiple meetings on administering, grading and packing the tests. During my latest meeting on grading the NYSESLAT (New York State English as a Second Language Achievement Test), the moderator made an interesting comment about state testing in general. Apparently she had the opportunity to work with Dr. Seuss in the past, and she repeated a comment he had made to her. He had said something to the effect that all teachers need to do is teach a child to think and then he or she will be able to pass any test given to them. That got me thinking. Do the tests we give students now make them think? And if they do, do the high stakes that go along with it cancel out the thinking? Is the purpose of all these tests completely lost?

I think of my own students who are given the test much too early in their school career in this country, and I can’t agree with the previous statement. English language learners are not being taught to think once testing mode begins. There is panic when it comes to having an ELL in a classroom. The score is being used to evaluate the teacher even though the student may have arrived in this country only a year previous. In order to circumvent what can be (depending on a multitude of factors) inevitable failure, the students are taught testing strategies. They learn how to find out the gist of the question and somehow match some of those words in the question to words in the passage and create a sentence from there. Is that teaching a student to think? No. Is that how these high stakes tests are often times handled? Yes.

State exams have changed the way teachers teach. They have changed the way curriculum is handled, especially in a lower income school. As a teacher in a school with students at a lower socioeconomic status, I see a notable difference in how students need to be prepared for a state exam. Instead of being able to teach a curriculum that engages students and promotes a lifelong love of learning, test prep periods are scheduled. Students work in test prep books that are filled with math problems and reading passages months in advance of the test. This is where test preparation becomes a class issue. Schools with students that are part of a higher socioeconomic status are not faced with months of test preparation. They are able to continue on with their curriculum until just before the test. There is no boredom associated with workbook after workbook.

When I see my lower income students at my school work in those workbooks, I see that thinking is lost. Instead of promoting deeper thinking because of the more difficult Common Core tests, I see students studying test strategy and learning how to guess their way to a correct answer. They all begin their writing passages with the same rote technique that was learned in order to most impress the mysterious graders. How does that promote better writing and college readiness? I had one student refuse to write anymore. He was bored, and instead chose to make his writing into a paper hat. In one sense I don’t blame him. I get bored of teaching the same type of writing over and over again as much as he gets bored writing it.

When I began writing on this topic someone suggested to me that perhaps a portfolio based assessment is a better judge of thinking and academic growth. I agree. This might even somewhat close the achievement gap between social classes. The interest level for the students would go up and therefore more meaningful learning is taking place. Wouldn’t a portfolio contain more student thinking than three stressful days of multiple choice questions and writing about poorly chosen stories? 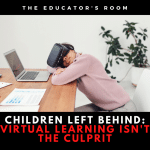 Children Left Behind: Virtual Learning Isn't the Culprit
« After the Assessments
Part 3: What's The Word? Decoding Skills in Reading »