Education historian and activist Diane Ravitch was the keynote speaker at the 86th Saturday Reunion, March 22, 2014, at Teacher’s College in New York City. Introducing Ravitch was the high energy Lucy Calkins, Director of Teacher's College Reading and Writing Project, who took several minutes using her "teacher voice" to address the crowd with a litany of "housekeeping" directions to insure a successful conference. While there were thousands of educators who had filed into the nave at Riverside Cathedral, there was an immediate "hush" as Calkins began speaking.

After laying out the ground rules for attending the workshops (125 offered that Saturday), Calkins turned her considerable energy to introducing a new collaborative venture, a website where educators can record their first hand experiences with the Common Core State Standards (CCSS) and Smarter Balanced Assessments (SBAC) or the Partnership for Assessment of Readiness for College and Careers (PARCC) testing. Her concerns about the focus on testing is shared by Ravitch who had come to speak about the negative impact of education reform.

Before Ravitch took the podium, Calkins explained that she has joined an all-star cast of educators in organizing this website where the voices of educators with first hand experience with standardized testing can document their experiences.  Diane Ravitch is one of the organizers as well as Richard Allington, Kylene Beers, Grant Wiggins, Robert Marzano, Anthony Cody, Kathy Collins, Jay McTighe, David Pearson, Harvey “Smokey” Daniels, Tom Corcoran, and others.  The site is called Testing Talk( http://testingtalk.org/) The site’s message on the home page states:

This site provides a space for you to share your observations of the new breed of standardized tests. What works? What doesn’t? Whether your district is piloting PARCC, Smarter Balanced, or its own test, we want to pass the microphone to you, the people closest to the students being tested. The world needs to hear your stories, insights, and suggestions. Our goal is collective accountability and responsiveness through a national, online conversation.

When Ravitch spoke to the crowd of educators, her message was clear. “We have an incredibly successful education system overwhelmed by a high test prep curriculum,” she declared. “What is the end game?” she asked and then answered her question, “Nothing less than the elimination of teaching as a profession, systematically aided and abetted by the Department of Education.” This bold statement was met with applause from the audience sitting in the cathedral.

Ravitch's argument against the corporate take over of education is detailed in her latest book Reign Of Error. In this book, she argues against the use of public dollars for testing and testing's associated expenses (software, hardware) instead of using funds to tackle other challenges in providing for the inequities in education, noting that 25% of children in the USA today live in poverty.

In addressing the crowd, Ravitch argued that the Common Core State Standards (CCSS) was written by a small group of non-educators. She added that the writing process of the CCSS was not transparent, and that, in violation of the National Standards Institute protocols,“there is no appeals process for standards that are seen as incorrect.” Moreover, although teachers were invited to “review” the CCSS,  the standards themselves were implemented without a field test. Now the two federally funded testing consortiums, PARCC and SBAC, will spend the next two years testing these standards online. Federal funding of these tests has totaled $360 million in federal funds according to Education Secretary Arne Duncan.

These standardized tests are the reason the TestingTalk website was developed. Both Calkins and Ravitch encouraged  teachers from every state to participate.  “This will be a site for you to record your experience with testing,but not to rant," encouraged Calkins. She noted that since American schools “are spending billions, all feedback on testing should be open and transparent.” This website will allow for transparency.

As she relinquished the podium to Ravitch, Calkins looked up from her notes to the thousands of teachers who had voluntarily come on a Saturday to participate in professional development.
“You will all be engaged,” she promised, “enter comments; sign your name.”
Then came her final admonishment, “Be brave.”

Why Data is Important 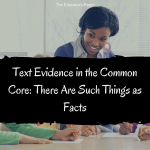 Text Evidence in the Common Core: There Are Such Things as Facts
« How I Flipped My Classroom
Celebrate National Poetry Month - Summarize With a Poem »