Teachers of all subjects, grades, and walks of life
Don't treat poetry like you're holding a knife!
This is Poetry month - help it to come alive
By using poetry to summarize!

How can you use poetry in class this month? Just a few suggestions:

Here are several different types of poems you can use as a summarizer in class this National Poetry Month:

There was an old man from Peru
Who dreamt he was eating his shoe.
He awoke in a fright
In th' middle of the night
And found it was perfectly true.

HAIKU - a nature-based poem that has roots in East Asia, the haiku has a 3-line, non-rhyme scheme. The first and last lines are 7 syllables, while the middle line is 5 syllables. Here's a haiku I wrote while looking outside:

I can see you there
Don't know the shade blocks you
Go away snow pile!

CINQUAIN - a varied poem that has roots in France, the cinquain is a 5-line, rhyme-less poem. The first line is a one-word title; the 2nd line describes it in 2 words; the 3rd line has two -ing actions verbs linked with a conjunction; the 4th line describes the 1st line in 4 words; the 5th line is a one word synonym of line 1. Cinquains are often center-spaced, too. Here's a cinquain I wrote about George Washington:

TROILET - a troilet is an 8-lined rhyming poem with repeating lines, originating in France & Britain. The rhyme scheme has the first line repeat twice (in the 5th and 7th lines), while the second line repeats as the last line. For the poetically devout, the scheme goes abAaABAaBb. Here's a troilet poem I have from either one of my colleagues or from our curriculum:

FREE VERSE - here, the author mostly gets to make his/her own rules and break established ones. However, a good poem needs to distinguish the difference between what is just a written in prose (the way we normally speak) and verse (the flow of a poem). In addition, a good poem has a meaning that can be interpreted to all in a different way while using poetic devices. Here's a free verse poem I wrote entitled "His Name," which I'll use for Easter at church:

We use His Name
In so many ways:
The Heavenly Child
Lamb of God
Beloved Son
& Morning Star
born unto this world
as a sign of hope
The Rock
Prophet
Bread of Life
& Emmanuel
an oracle who spread
God’s Word and Love
The True Vine
Good Shepherd
Prince of Peace
& King of Kings
the leader of the weak
who need His guidance
The Messiah
Savior
Redeemer
& Alpha and Omega
our sacrifice
and salvation
But most importantly
The Carpenter
who built us a bridge
with 2 boards and 3 nails

SONNET - the queen of all poems, and definitely the most difficult to master. The sonnet requires a constant rhyme scheme for 14-lines and iambic pentameter (10 syllables per line). There are two types, the Petrarchan (Italian) and the Shakespearean (British). The latter is my favorite of the two, mostly because it's rhyme scheme (ABAB CDCD EFEF GG) is easier for students to see and personally for me to work with. Here is one of Shakespeare's most famous, titled "The Dark Lady." The fun part of this sonnet is he talks smack on how his woman isn't really all that beautiful according to standards back then, but then at the end hits us with his true feelings.

My mistress' eyes are nothing like the sun,
Coral is far more red, than her lips red,
If snow be white, why then her breasts are dun:
If hairs be wires, black wires grow on her head:

I have seen roses damasked, red and white,
But no such roses see I in her cheeks,
And in some perfumes is there more delight,
Than in the breath that from my mistress reeks.

I love to hear her speak, yet well I know,
That music hath a far more pleasing sound:
I grant I never saw a goddess go,
My mistress when she walks treads on the ground.

And yet by heaven I think my love as rare,
As any she belied with false compare.

May this month honoring our nation's poetry
Make both you and your students happy
And teachers, don't be afraid to go the extra mile:
Poems affix firmly to students' faces - a smile. 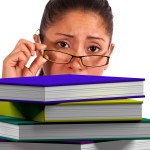 A Poem for National Poetry Month
« "TestingTalk" Website Where Teachers Can "Be Brave"
Recruitment and Retention Part 3: Incentivizing the Best to Teach in High Needs Schools »