The insistence on vocabulary in education is a time-tested tradition of teachers. However, as curriculum changes and adapts, so does our subject-specific student vocabulary. That said, why hasn't teacher vocabulary altered and upgraded throughout the years? Let's look at a few things teachers say, what we should begin saying instead, and why...

1 - Start saying learn about, instead of get through
The idea for this article came when I observed a colleague talking about a specific lesson that I loved in school. This teacher said "well, we just need to get through ____, and then..." I'm sorry, but getting through something has negative connotation written all over it. The word is synonymous with endurance. Is that what we need to do? Just need to endure this lesson so we can move onto the next one? People get through relationship issues, prison sentences, injuries, and so on. On the other hand, some don't. They shouldn't have to get through lessons - or maybe lose out because of them. They should learn them. Learning, at its most simplistic core, is fun. Getting through is not.

2 - Start saying uncover, instead of saying cover
Every time I hear a teacher say "we just need to cover ____," I cringe. Things that are covered are things one doesn't want to see anymore: convertibles for the winter, grandma's plastic sheet over her couches, or bodies at the morgue. Instead, what if we uncovered lessons? Instead of talking about placing a sheet over something, let's take it out of the box. Let's play with it. Let's learn by experience and examination, not protecting ourselves from dust sediment.

3 -  Start saying test, quiz, quest, or something more creative, instead of saying assessment,
I think it's fair to call things an assessment to students. In the business world, not all "tests" are the same. Meeting one client is not akin to meeting another. One project does not have the same weight as others. Students need to have that understanding as to what is big and what is not. Additionally, if a teacher would like to be creative about naming their graded tests, quizzes, something between the two (QuEst), feel free to do so to help calm the nerves of the test-phobic, who grow in number with each standardized edition.

4 - Stop saying worksheet
Really, if all one is teaching is a printout, is it really that valid? The difference between teachers and computers is that computers are only worksheets. Teachers are engaging the future.

5 - Start saying interactive discussion, instead of saying lecture
If all a teacher does is deliver his / her expertise, how much of that is actually gestated by the learner? There's the famous William Glasser adage that "we learn 10% of what we read, 20% of what we hear," and so on. In there, Mr. Glasser says we learn 70% of what we discuss, and 95% of what we teach. Students in our seats have bright, capable minds that, like our computers, often sit in sleep mode. To upload the latest, greatest lesson, engage that brain. Discuss it with them. Hold the students accountable for participating.

6 - Start saying team time, instead of saying group work
Ohhhhhhh, group work. How we loathe you so. When a student - current or former - thinks of group work, they think of the joke that they want to invite "everyone who was in their group project" to their funeral "so they can let me down one last time." Jokes aside, teams are stronger than groups. There is no "I" in team, but there is tons of accountability. Groups are often graded as a whole, while teams can be analyzed per each player and his/her contributions, or lack thereof.

7 - Start saying warm-up and cool down, instead of saying activating strategy, bellringer, and summarizer
EduSpeak is eventually going to be on its way out, and common sense is coming back. Welcome its return by scrapping all of the crafty words we saw in Dr. Max Thompson's Learning Focused Schools - or whatever "punch" said district subscribed to - and their cheesy videos, and start making things relatable for students.

8 - Start saying #1 idea or big thing; instead of saying essential question or lesson objective
When the day is all said and done, what will the students go home and tell their parents they learned about or experimented with? That's the big thing. That's what we want them to take away with them that day and forever.

9 -  Start asking when do we think we can have this done, instead of saying this is due ____,
This goes within reason, but teachers often complain about how irresponsible students are. Let's start by putting this back in their court and having them vote on a due date. It might not work, but, hey, when 20% of the projects we need to grade are late regularly, can it get any worse?

10 - Start exclaiming this can be the rest of your life! instead of saying this is just ____,
Several teachers throw their own curriculum under the bus. What we're teaching today could be the spur that causes that student to enter the field and revolutionize it. And this can happen any day, even our first. Case in point: on my very first day of school - ever - I had a student question why we play a "name game," and she refused to take part. I dug in my heels and gave her a 2 page essay to take home. She instead returned with a highlighted version of my syllabus and a written explanation as to why she shouldn't have to write the essay. I acquiesced, since she was right. Today she's my lawyer - and a darn good one, too - because I didn't teach her American government. I taught her what her passion was to be.

Creative Writing Strategies For Elementary Students - Outside Of The Classroom

Lack of Substitutes Is Canary in the Mine 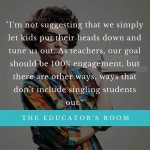